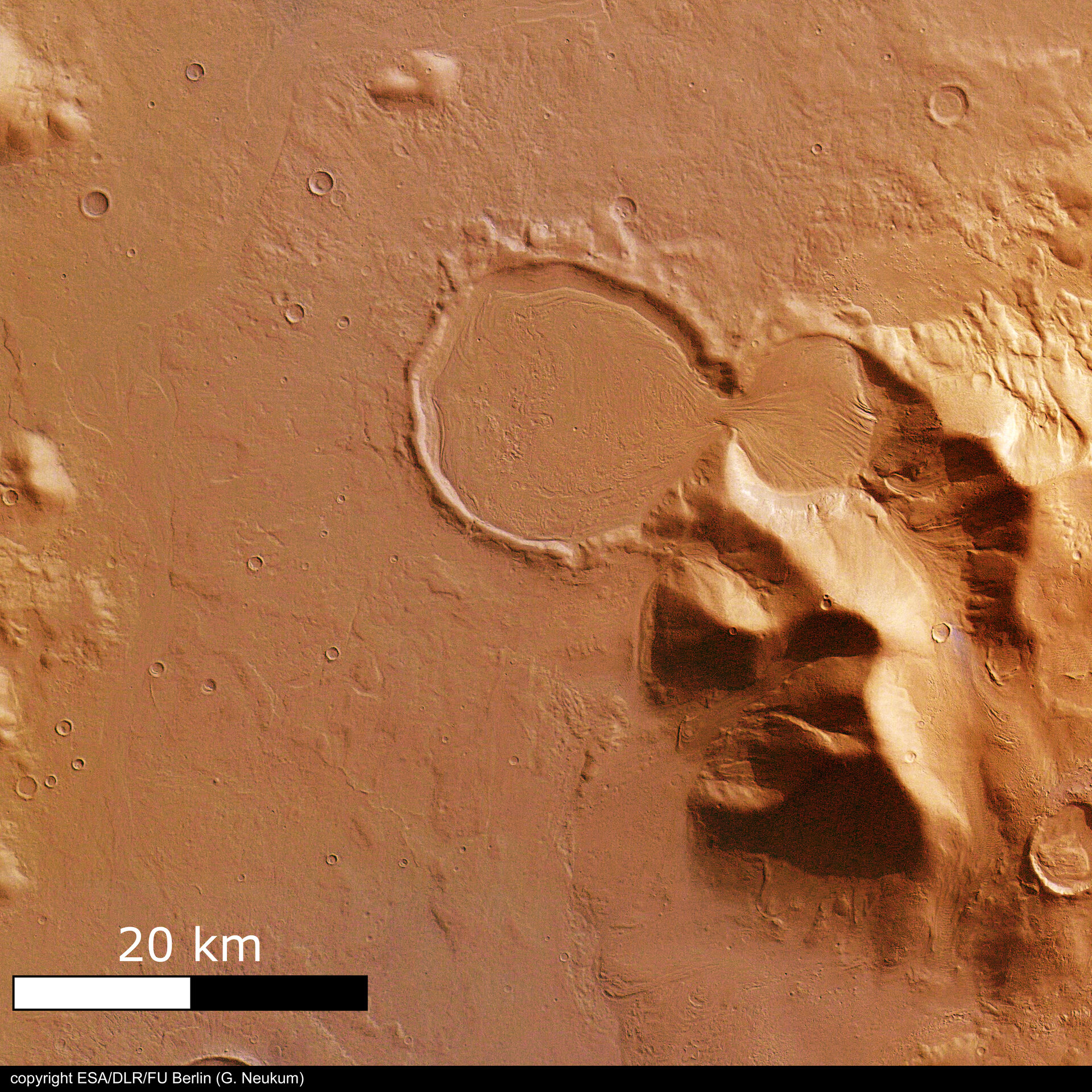 This unusual ‘hourglass’-shaped structure is located in Promethei Terra at the eastern rim of the Hellas Basin, at about latitude 38º South and longitude 104º East.

A so-called ‘block’ glacier, an ice stream with a large amount of scree (small rocks of assorted sizes), flowed from a flank of the massif into a bowl-shaped impact crater (left), nine kilometres wide, which has been filled nearly to the rim. The block glacier then flowed into a 17 kilometre wide crater, 500 metres below, taking advantage of downward slope.

The Martian surface at mid latitudes and even near the equator was being shaped by glaciers until a few million years ago. Today, water ice could still exist at shallow depths as ‘fossil’ remnants of these glaciers.

Numerous concentric ridges are visible and appear similar to ‘end moraines’ (hills of scree that form as an extending glacier pushes material ahead and remain after its retreat). Furthermore, there are parallel stripe-like structures that are interpreted as middle moraines, displaying the flow direction of these glaciers.

In locations where glaciers creep over steep terrain, cracks are visible. Similarly in terrestrial glaciers, cracks are formed when tensile stress within the ice increases due to greater slope and uneven terrain.

Further glacial features include elongated grooves, extending several kilometres, and elongated hills observed on the surface of mountain ridges some distance from potentially glaciated areas. These hills could be analogous to so-called ‘drumlins’, structures formed beneath ice by glacial flow resulting in compression and accumulation of abraded material. On Earth, drumlins appear in formerly glaciated regions such as Germany’s Bavarian alpine uplands. These glacial structures are seen in a consistent spatial context, confirming the belief that scientists are really seeing former glaciers on Mars.

Of particular interest is the age of these glacially shaped surfaces, which seem to be fairly intact over a wide area of the formerly glaciated terrain. Typical evidence for a significant loss of ice volume, such as ‘kettle holes’ present in ice-free regions of Iceland, are almost entirely missing. The statistical analysis of the number of craters formed by meteorite impacts used for age determination also shows that part of the surface with its present-day glacial characteristics was formed only a few million years ago. In planetology, this age range is considered extremely young.

In these latitudes, ice on the surface of Mars is not stable over a long period of time due to the extremely thin atmosphere. In theory it is cold enough to allow for the existence of glaciers at the equator – summer day temperatures rise to a maximum of 20° C while night and winter time temperatures often drop below minus 50° C.

But under the prevailing atmospheric pressure, ice would sublimate (transform directly from solid to gaseous state), and then escape from the atmosphere into outer space.

Therefore, glaciers must have formed until a few million years ago, in a time that was warmer and possibly also had a thicker atmosphere, and then became inactive or retreated due to the lack of continued supply of ice. Since then, they have been protected from sublimation by a thin dust layer. On Mars, dust is almost ubiquitous and would explain why ‘fossil’ ice present at depths of only a few metres could not be detected by other instruments such as spectrometers.

If these conclusions prove to be true, the results would indicate a climate change on Mars within the last million years. Such a dramatic climate change has been discussed for some years by Mars researchers. It could have been caused by a shift in the polar axis of the planet over millions of years – a phenomenon long known to scientists. Martian climate history is one of the main areas that ESA’s Mars Express can help to decipher.