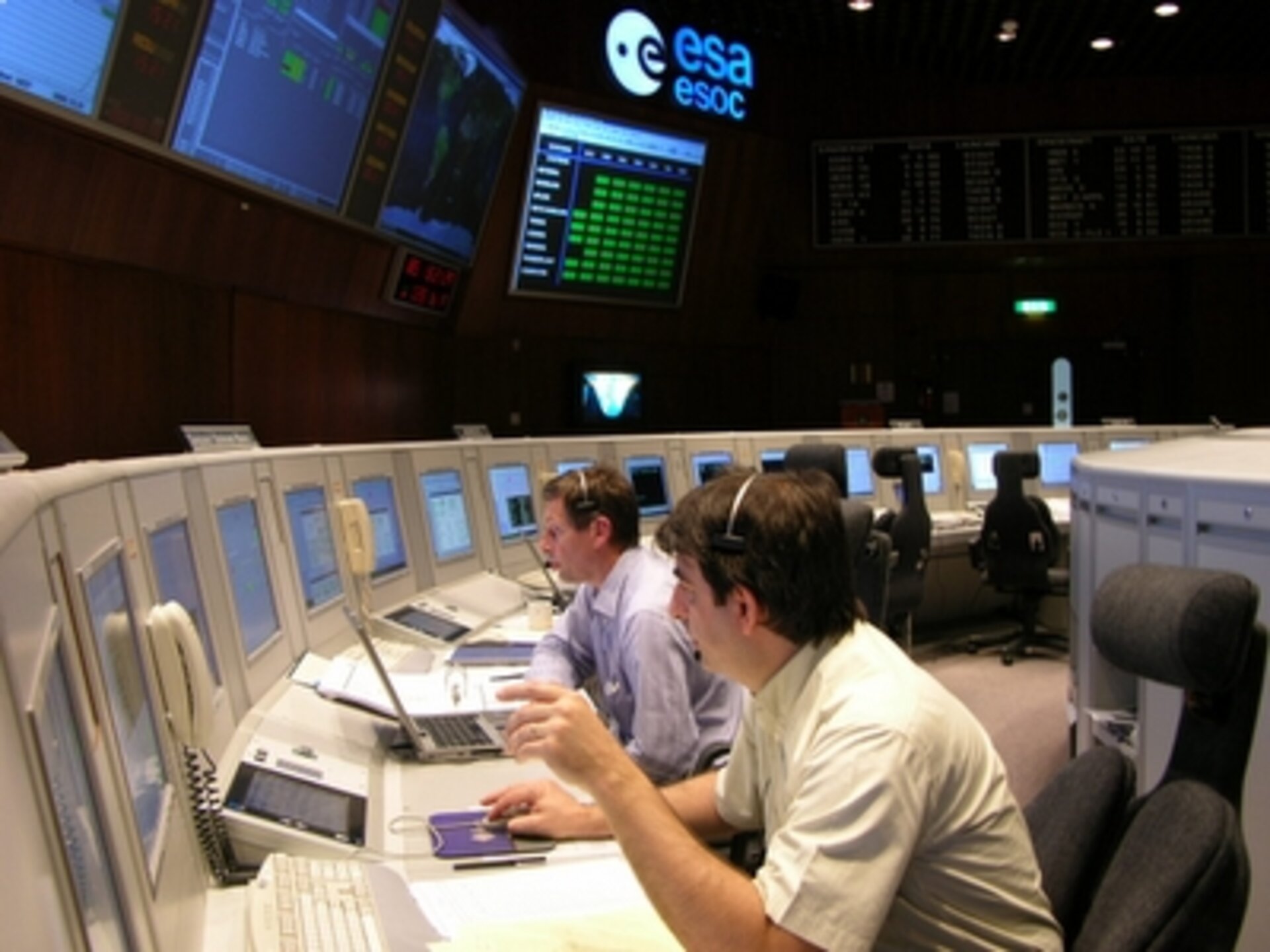 "The aim of our simulation campaign is to train the flight control teams to react to any unexpected situation. We started in March with two simulations per week and until a few days ago, we were very busy finalising the flight procedures to be used for monitoring and controlling the spacecraft. Now we have entered LEOP freeze," Pier Bargellini, Spacecraft Operations Manager (SOM) for the 'B' team, said.

'LEOP freeze' is the period immediately before launch when mission control software and flight operation procedures are fixed so as not to inadvertently introduce errors.

ESOC is providing LEOP control services to MetOp's eventual owner, EUMETSAT (European Organisation for the Exploitation of Meteorological Satellites), as a contracted service and will hand control over to EUMESAT for instrument commissioning and then routine operations at the end of LEOP, scheduled for 20 July.

MetOp is formally 'MetOp-A', the first in a series of three satellites, and will be launched on a Soyuz from Baikonur, Kazakhstan.

We assume control once the spacecraft has separated from the launcher; we will be very busy as MetOp is a complex satellite.

The multinational flight control team is split into 'A' and 'B' shifts to provide 24-hour-per-day operations during the high-stress launch and early orbit phase, when critical mission activities must take place at the right time and in the correct sequence.

These include confirming separation from the launcher, deploying the solar array and powering up onboard systems.

The flight control team includes 15 ESA staff and contractors working directly on MetOp-A, who are supported by additional ESOC experts in functional areas such as software support, flight dynamics and ground station control.

During some simulations, ESOC personnel have also been joined by representatives from EUMETSAT, the project team at ESTEC, who were responsible for satellite development, and from the satellite's prime contractor, EADS-Astrium.

Due, in part, to MetOp's planned polar orbit, a larger-than-usual set of ground stations will be involved in LEOP, including Kerguelen, Malindi, Esrange, Alaska, Hawaii, Svalbard and Maspalomas; of these, the Maspalomas station is part of ESA's worldwide ESTRACK ground tracking station network, while the others are cooperating stations operated by other agencies.

Svalbard, Norway, is home to the EUMETSAT Polar System (EPS) Command and Data Acquisition station, to which data from MetOp will be transmitted during routine operation.

ESOC, home to ESA's operations directorate, is well known in the space community as a centre of excellence for satellite control and in particular for LEOP operations.

"We start our work some 16 hours before launch, monitoring the long series of activities at Baikonur as they get the Soyuz and MetOp-A ready to launch. We actually assume control one hour and eight minutes after lift-off once the spacecraft has separated from the launcher; we will be very busy as MetOp is a complex satellite," says Bargellini.

For MetOp, controllers will be watching very carefully throughout LEOP, but particularly at certain key steps. Support cables that keep the solar array tightly folded must be released, and then the array must properly deploy via activation of four electrical motors. Later, pyrotechnic charges will fire to unlock other onboard units.

There's good interaction and now everyone on the team knows each other.

Many of these steps are automated and executed by onboard software, but controllers must monitor and be ready to react in case of any problems. "Until the solar array deploys, we're running on batteries, and they're only designed to last a short time," said Bargellini.

On the second and subsequent days of LEOP, several payload antennas must be deployed, which Bargellini says is "a complicated and critical operation," and orbit correction manoeuvres will take place using MetOp's onboard thrusters.

In addition to Bargellini's B flight control team, MetOp LEOP will be controlled by the A team under Spacecraft Operations Manager Francois Bosquillon de Frescheville.

All ESOC personnel involved in MetOp are looking forward to launch as the culmination of months of preparation, which have included long hours in ESOC's Main Control Room during LEOP simulations and diligent work to build teamwork and cohesion from an international group of individuals.

The MetOp programme's series of three satellites is being designed and developed by ESA in partnership with EUMETSAT, and forms the space segment of EUMETSAT's Polar System (EPS).

According to the co-operation agreement between ESA and EUMETSAT, ESA is responsible for the development of the space segment and EUMETSAT for the overall system, including the launch services, the ground segment and the operations for the duration of the mission.