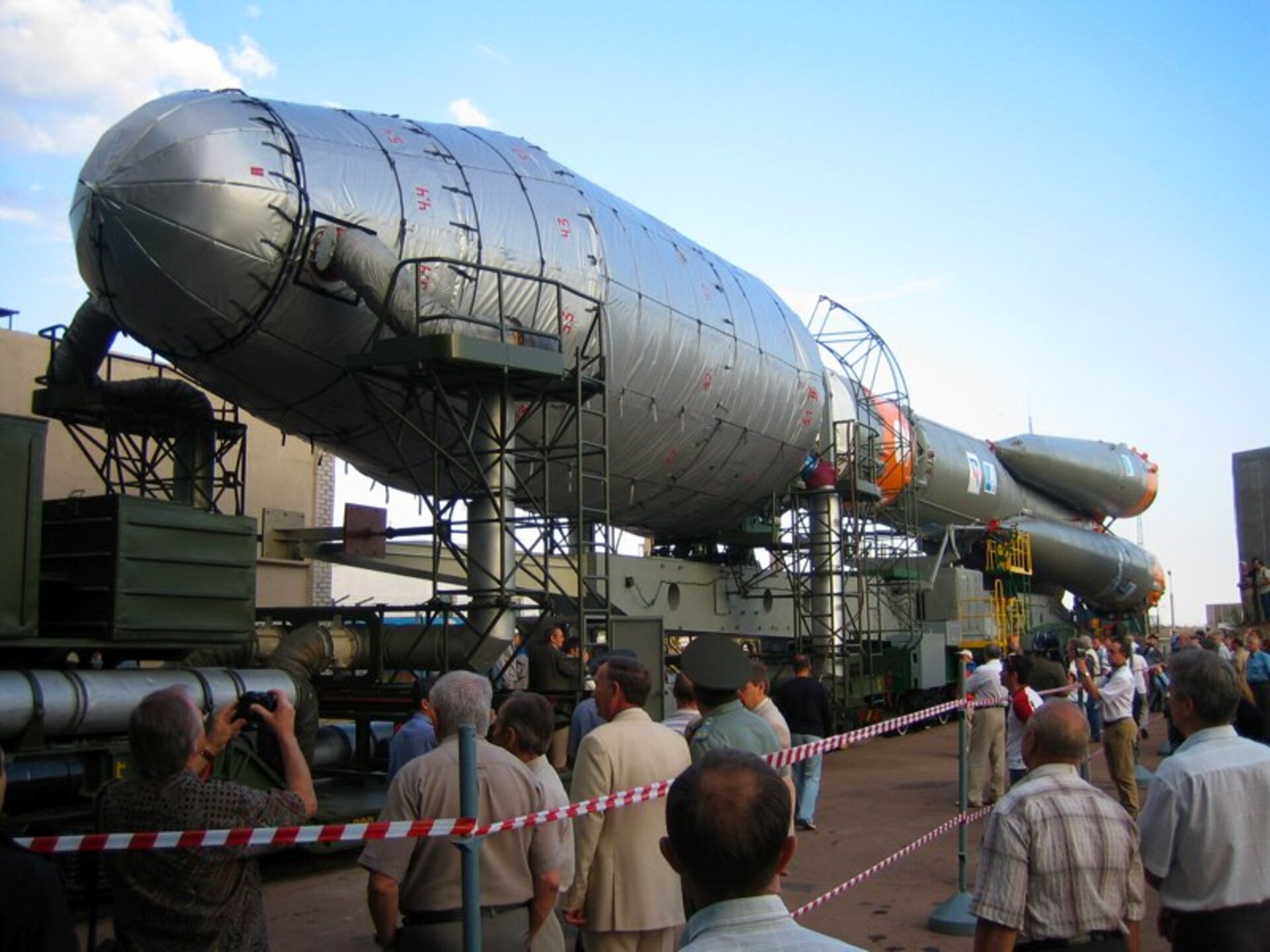 Following the roll-out to the launch pad and final countdown rehearsal at the weekend, MetOp is ready for launch at 18:28 CEST today. The launch of Europe's first polar-orbiting weather satellite is set to make a major contribution to global weather forecasting and climate monitoring.

The roll-out to the pad and erection of the Soyuz rocket at the launch tower took place on Friday 14 July. The whole procedure took less than three hours to complete. Carried by train, the launcher left the hall where the upper-composite had been integrated with the third-stage of the Soyuz launch vehicle last week.

The train slowly pulled the ensemble over to the nearby launch pad – a spectacular view for the engineers who have been working on the launch campaign over the last months.

A second train pushed the erector into place at the launch pad, which carefully lifted the launcher into vertical position with the aid of a massive hydraulic ram. The precision and speed with which this exercise was carried out was very impressive and after only a short time the launcher was safely in position with the support arms attached and the erector could be removed. At the same time, the two sections of the service tower were closed and the umbilical arms are lifted into place.

The rest of the day was dedicated to checking that all the electrical, mechanical and thermal connections were are correct. With everything in working order, the final countdown rehearsal took place on Saturday and was carried out without major incident, but allowed sorting-out some minor issues.

With MetOp's array of sophisticated instrumentation, the launch today will mark a significant step forward in global operational meteorology and improve our understanding of atmospheric process and climate change.

MetOp-A is the first in a series of three being developed as part of a joint undertaking between the European Space Agency (ESA) and the European Organisation for the Exploitation of Meteorological Satellites (EUMETSAT), whereby MetOp forms the space segment of EUMETSAT's Polar System (EPS).

ESA is responsible for the satellite development and procurement and EUMETSAT takes responsibility for the operational system. With the follow-on satellites MetOp-B and –C, scheduled to launch 4.4 years apart, the programme promises to provide operational meteorological data until 2020.

In addition, MetOp is the European contribution to a new cooperative venture with the American National Oceanic and Atmospheric Administration (NOAA) through the Initial Joint Polar Satellite System where MetOp flies in a 'morning orbit' and the complementary NOAA satellite flies in the 'afternoon orbit'.

This global observing system is able to provide invaluable meteorological data from polar orbit to users within 2 hours and 15 minutes of the measurements being taken and global coverage within six hours.