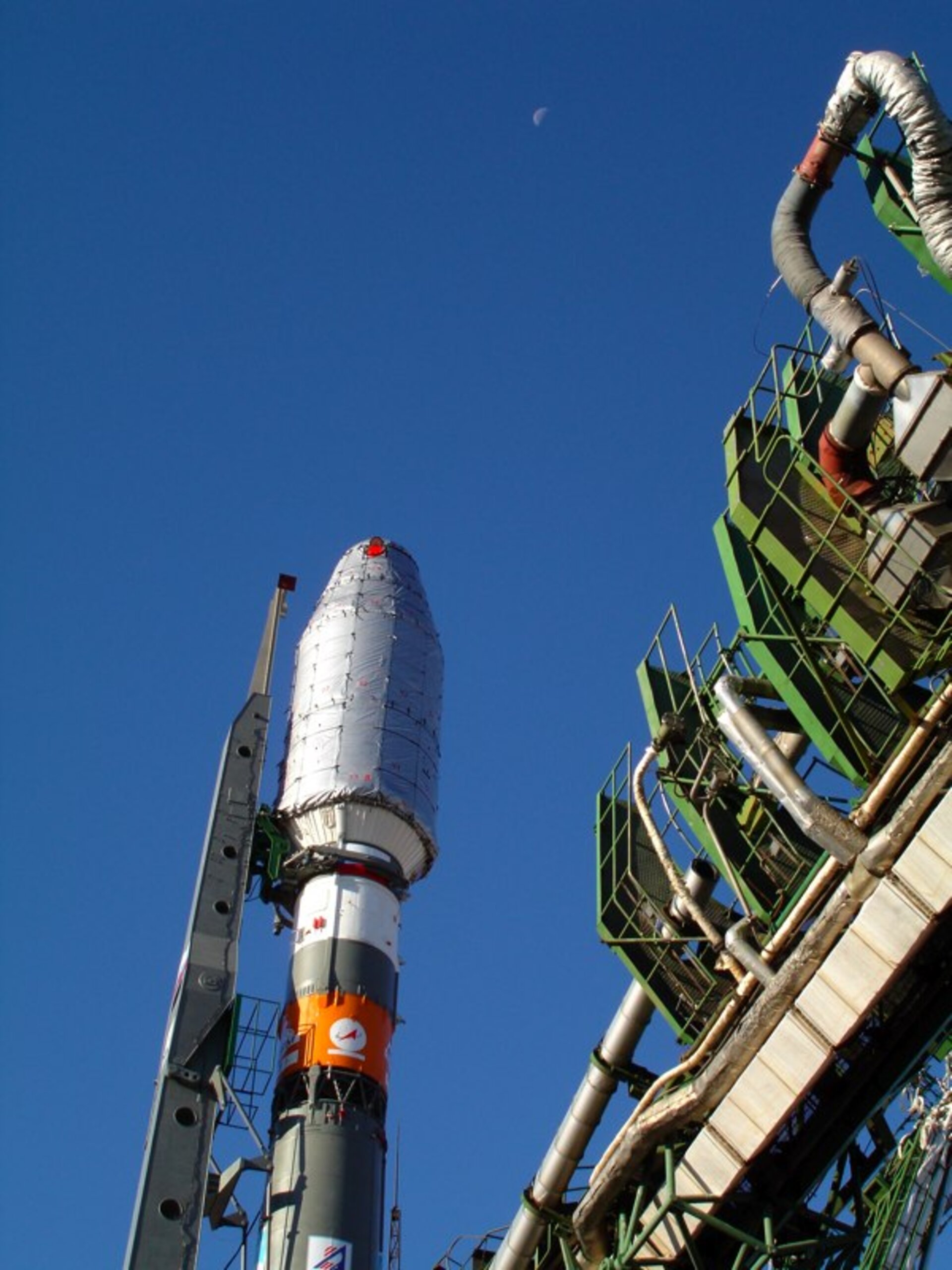 Following the roll out to the launch pad and erection at the launch tower at the weekend, MetOp is ready for launch at 18:28 CEST tomorrow from the Baikonur Cosmodrome in Kazakhstan. The launch of Europe's first polar-orbiting weather satellite is set to make a major contribution to global weather forecasting and climate monitoring.

The roll out to the launch pad and erection of the Soyuz rocket at the launch tower took place on Saturday 14 October. Carried by train, the launcher left the hall where the upper-composite, which comprises the MetOp satellite and the Fregat upper-stage, had been integrated with the third-stage of the launch vehicle. The train slowly pulled its cargo over to the launch pad where the rocket was erected with the help of a huge hydraulic ram. The final countdown rehearsal followed, confirming that the launch will go-ahead tomorrow.

Once launched, MetOp will be renamed 'MetOp-A' as it is the first in a series of three satellites developed as part of a joint undertaking between ESA and the European Organisation for the Exploitation of Meteorological Satellites (EUMETSAT), whereby MetOp forms the space segment of EUMETSAT's Polar System (EPS). In addition, MetOp is the European contribution to a new cooperative venture with the American National Oceanic and Atmospheric Administration (NOAA), so that MetOp and NOAA satellites fly in complementary orbits to maximise the coverage area over which observations are made.

MetOp is Europe's first polar-orbiting satellite dedicated to operational meteorology and with its array of sophisticated instruments, this weather satellite promises to provide data of unprecedented accuracy and resolution on a whole host of different variables such as atmospheric temperature and humidity, wind speed and direction over the ocean, ozone and other trace gases, thus making a major contribution to global weather forecasting and climate monitoring capabilities. The payload also includes an instrument for data collection, an instrument to observe the weather in space as well as a tracking system to aid search-and-rescue operations.

At just over 4000 kg, MetOp is the second largest Earth-observation satellite built in Europe. Its launch tomorrow will mark a new era in the field of meteorology by improving medium- to long-term weather forecasting and climate monitoring whilst contributing to our understanding of global change.