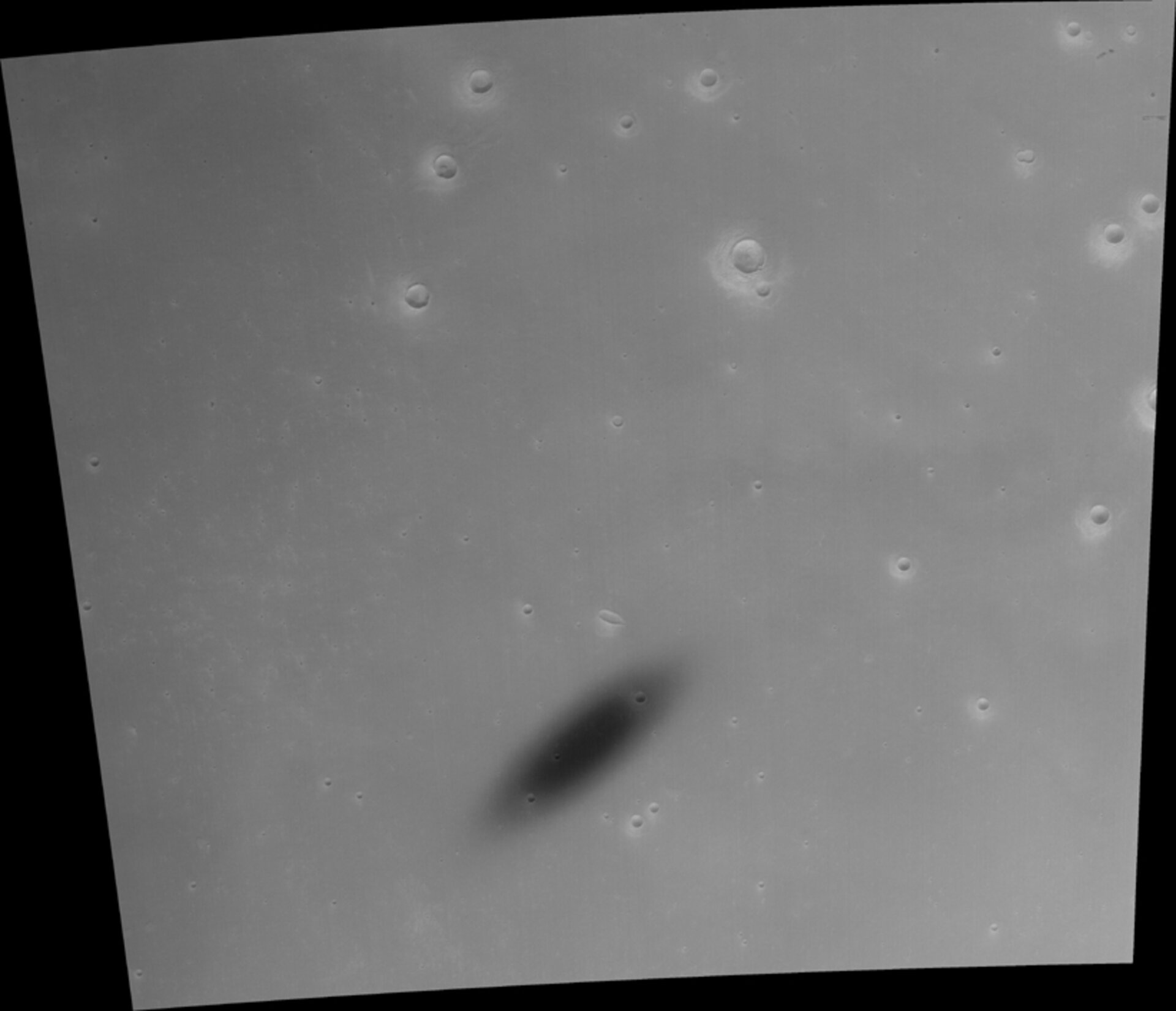 These images, taken by the High Resolution Stereo Camera (HRSC) on board ESA’s Mars Express spacecraft, show the fast-moving shadow of the moon Phobos as it moved across the Martian surface.

The HRSC obtained these unique images during orbit 2345 on 10 November 2005. These observations would not have been possible without the close co-operation between the camera team at the Institute of Planetary Research at DLR and the ESA teams, in particular the mission engineers at ESA's European Space Operations Centre (ESOC) in Darmstadt, Germany.

They confirm the model of the moon’s orbit around Mars, as it was determined earlier in 2004 also on the basis of HRSC images. They also show that with accurate planning even moving objects can be captured exactly at their predicted position.

The basis for such observations is the accurate knowledge of the spacecraft position in its orbit as well as of the targeted location on Mars to within a few hundred metres.

Phobos is the larger of the two Martian moons, 27 kilometres by 22 kilometres in size, and travels around Mars in an almost circular orbit at an altitude of about 6000 kilometres. Phobos takes slightly more than 7.5 hours to complete a full revolution around the planet.

When it is between the Sun and Mars, Phobos casts a small and diffuse shadow onto the Martian surface. To an observer on Mars, this would appear as a very quick eclipse of the Sun. This is similar to an eclipse on Earth, when the Moon covers the solar disk but much slower.

The shadow of Phobos has an elliptical shape on the Martian surface, because the shadow’s cone hits the surface at an oblique angle. This shadow appears to be distorted even more because of the imaging technique of the HRSC.

Since HRSC scans the surface synchronised with the flight velocity of Mars Express, it takes some time to cover the shadow in its full dimension. Within this short time, however, the moon moves on, and therefore the shape of its shadow is ‘smeared’ in the HRSC image.

Another phenomenon, that the shadow is darker at its centre than the edges, can be explained by again imagining the observer on Mars. With its small size, Phobos would only cover some 20% of the solar disk.

Even if the observer stood in the centre of the shadow, they would still be illuminated by the uncovered part of the Sun’s disk, in a partial solar eclipse instead of a total eclipse.

Members of the HRSC Science Team recalculated the orbit of Phobos on the basis of images taken in 2004. With the help of the improved orbit determination – the moon has advanced about 12 kilometres with respect to its previously predicted position along its orbit – it was possible to calculate those precise times when the shadow observations could be made. In turn, it was possible to verify the accuracy of the improved orbit determination by the shadow’s position in the new images.