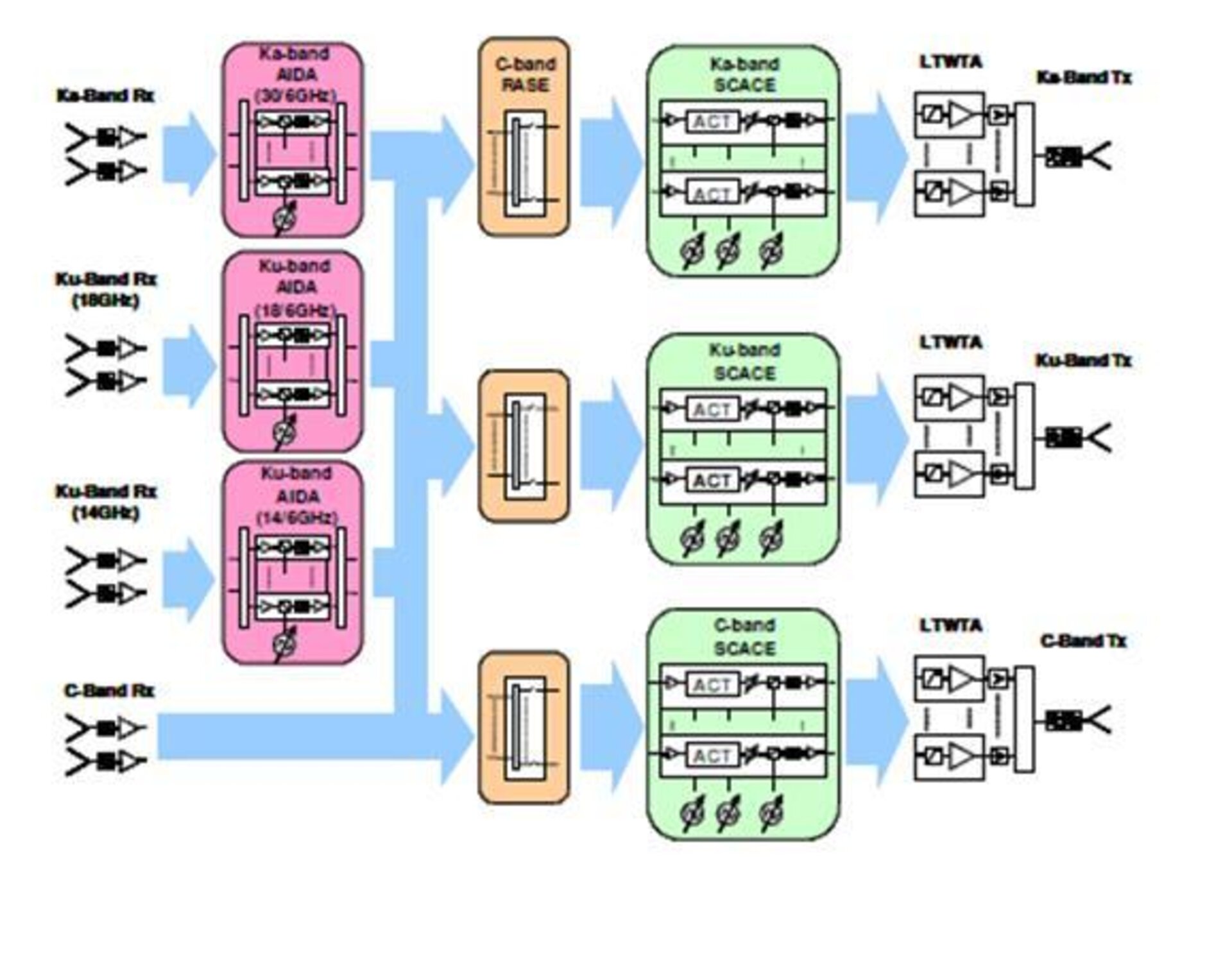 The Hylas-1 payload is the first to employ a new architectural concept called the Generic Flexible Payload (GFP), developed by EADS Astrium with funding from ESA via the Advanced Research in Telecommunications Systems (ARTES) programme.

The need for flexibility

In a conventional telecommunications payload, a transponder’s receive frequency, bandwidth and transmit frequency are all fixed during the satellite design phase, typically several years before entering into service.

During the lifetime of a satellite, however, evolving business and political landscapes, the emergence of new technologies and applications, or even a change of orbital location or owner, can alter the operational requirements on the payload. With the expected lifetime of current commercial satellites exceeding 15 years, the ability to adapt to these changing needs would be highly advantageous.

The GFP architecture allows the satellite’s frequency plan to be redefined throughout the mission lifetime via commands from the ground. When combined with new power amplifier technology that allows satellite transmit power to be redistributed between service regions, the payload can flexibly reallocate the most critical resources of spectrum and power according to the specific needs of the time.

The GFP solution works by converting the frequency of all signals received by the satellite to a common Intermediate Frequency (IF), of approximately 6 GHz. This function is performed by an electronic unit called the Agile Integrated Down-converter Assembly, (AIDA). Variants of the AIDA have been produced that cover Ku-band for fixed satellite services (Ku-FSS), Ku-band for broadcasting satellite services (Ku-BSS) and Ka-bands. For payloads that use C-band uplink frequencies no AIDA is required because the received signal is already at the correct IF.

Extensive connectivity is inherent to the GFP architecture: the IF output signals from the AIDA are all input to a sold-state switch matrix, called the Routing And Switching Equipment (RASE). The RASE allows connectivity between any pair of satellite uplink and downlink beams. In addition, the RASE allows links to be operated in ‘broadcast’ mode whereby a single uplink signal can be transmitted in multiple downlink beams simultaneously.

Having established the desired end-to-end connectivity path through the payload, the uplink signal is then ‘conditioned’ by a piece of equipment which constitutes the heart of the GFP concept called the Single Channel Agile Converter Equipment, (SCACE). The SCACE comprises three principle elements/functions:

For Hylas-1, the required transmit signal is amplified prior to retransmission by an In Orbit Adjustable Microwave Power Module (IOA-MPM). This allows the transmit power signal to be adjusted whilst maintaining near-constant efficiency, with Hylas-1 representing its first use on a flight mission.

This innovation (developed by Germany’s Tesat-Spacecom) enables the available satellite power to be reallocated between transponders as demanded by evolving operational conditions.

The equipment making up the Hylas-1 payload incorporates a number of technical innovations that allow a very high degree of functionality to be contained within highly integrated, compact, analogue subassemblies.

This equipment is based on the Modular Microwave Hybrid Technology concept developed by Astrium under a series of ESA funded ARTES projects.

With this approach, the high-frequency elements of the design are realised by embedding active and passive circuit elements within multi-layer ceramic substrates housed within hermetically sealed cavities.

Low-frequency and DC bias circuits are mounted on the outside of the structure to form complete functional blocks (or ‘hybrids’) such as frequency-converters, amplifiers, and agile frequency synthesizers.