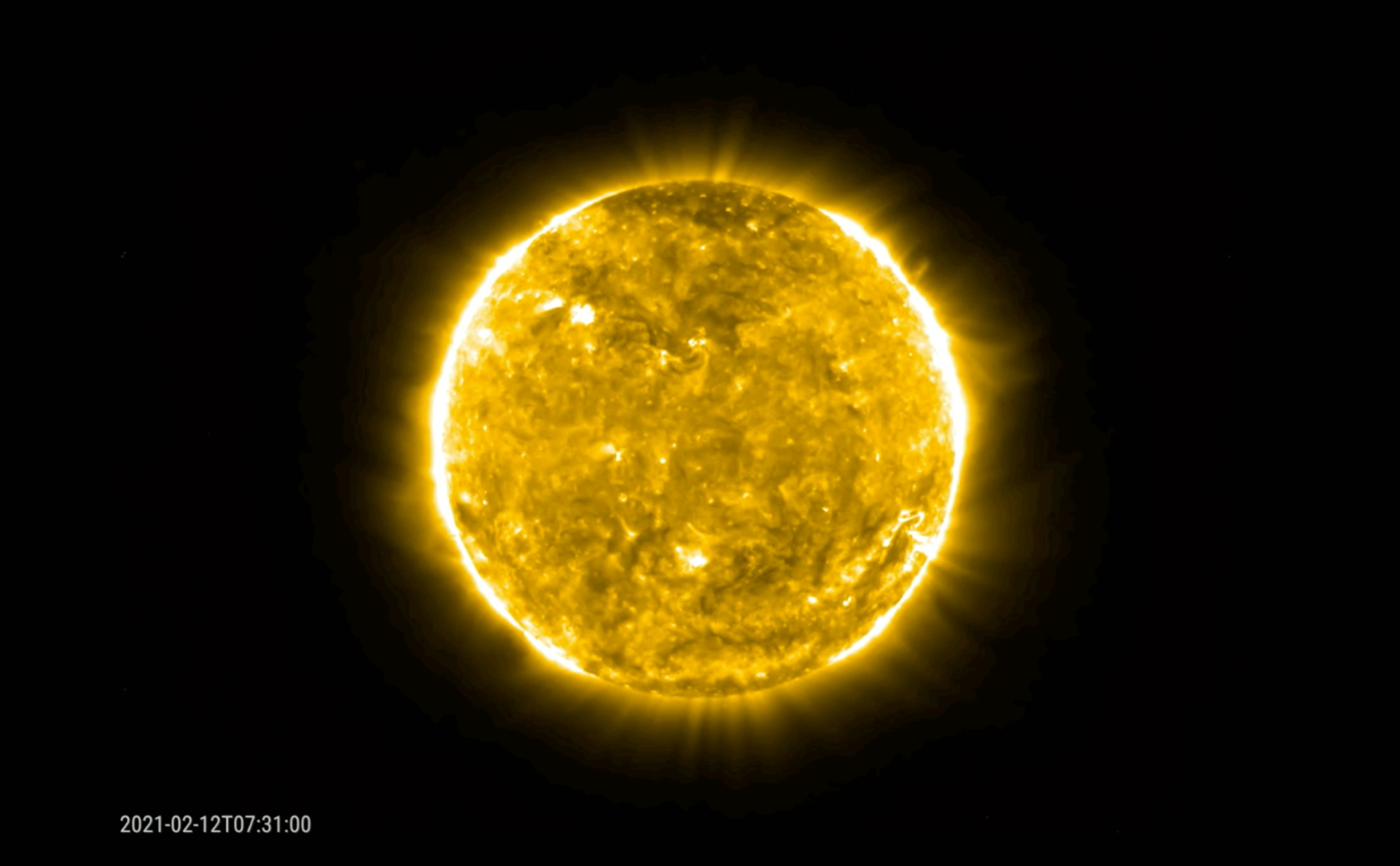 Solar Orbiter launched on 10 February 2020 and is currently in cruise phase ahead of the main science mission, which begins November this year. While the four in situ instruments have been on for much of the time since launch, collecting science data on the space environment in the vicinity of the spacecraft, the operation of the six remote sensing instruments during cruise phase is focused primarily on instrument calibration, and they are only active during dedicated checkout windows and specific campaigns.

A close perihelion pass of the Sun on 10 February 2021, which took the spacecraft within half the distance between Earth and the Sun, was one such opportunity for the teams to carry out dedicated observations, checking instrument settings and so on, in order to best prepare for the upcoming science phase. In full science mode, the remote sensing and in situ instruments will routinely make joint observations together.

At the same time as the close solar pass, the spacecraft was ‘behind’ the Sun as viewed from Earth, resulting in very low data transfer rates. The data from the close flyby have therefore taken a long time to be completely downloaded and are still being analysed.

By happy coincidence, three of Solar Orbiter’s remote sensing instruments captured a pair of coronal mass ejections in the days after closest approach. The Extreme Ultraviolet Imager (EUI), the Heliospheric Imager (SoloHI) and the Metis coronagraph captured different aspects of two CMEs that erupted over the course of the day.

The CMEs were also seen by ESA’s Proba-2 and the ESA/NASA Solar and Heliospheric Observatory (SOHO) from the ‘front’ side of the Sun, while NASA’s STEREO-A, located away from the Sun-Earth line, also caught a glimpse, together providing a global view of the events.

For Solar Orbiter’s SoloHI, this was the first coronal mass ejection seen by the instrument; Metis previously detected one on 17 January, and EUI detected one in November last year, while the spacecraft’s in situ detectors bagged their first CME soon after launch in April 2020. Many of the in situ instruments also detected particle activity around the February 2021 CMEs; the data are being analysed and will be presented at a later date.

For SoloHI the CME sighting was particularly serendipitous, captured during ‘bonus’ telemetry time. Upgrades in Earth-based antennas made since after the mission was planned allowed the team to downlink data at times they previously didn’t expect to be able to, albeit at lower telemetry rates. They therefore decided to collect just one tile’s worth of data (the instrument has four detector tiles) at a two-hour rate, and happened to capture a CME during that time. 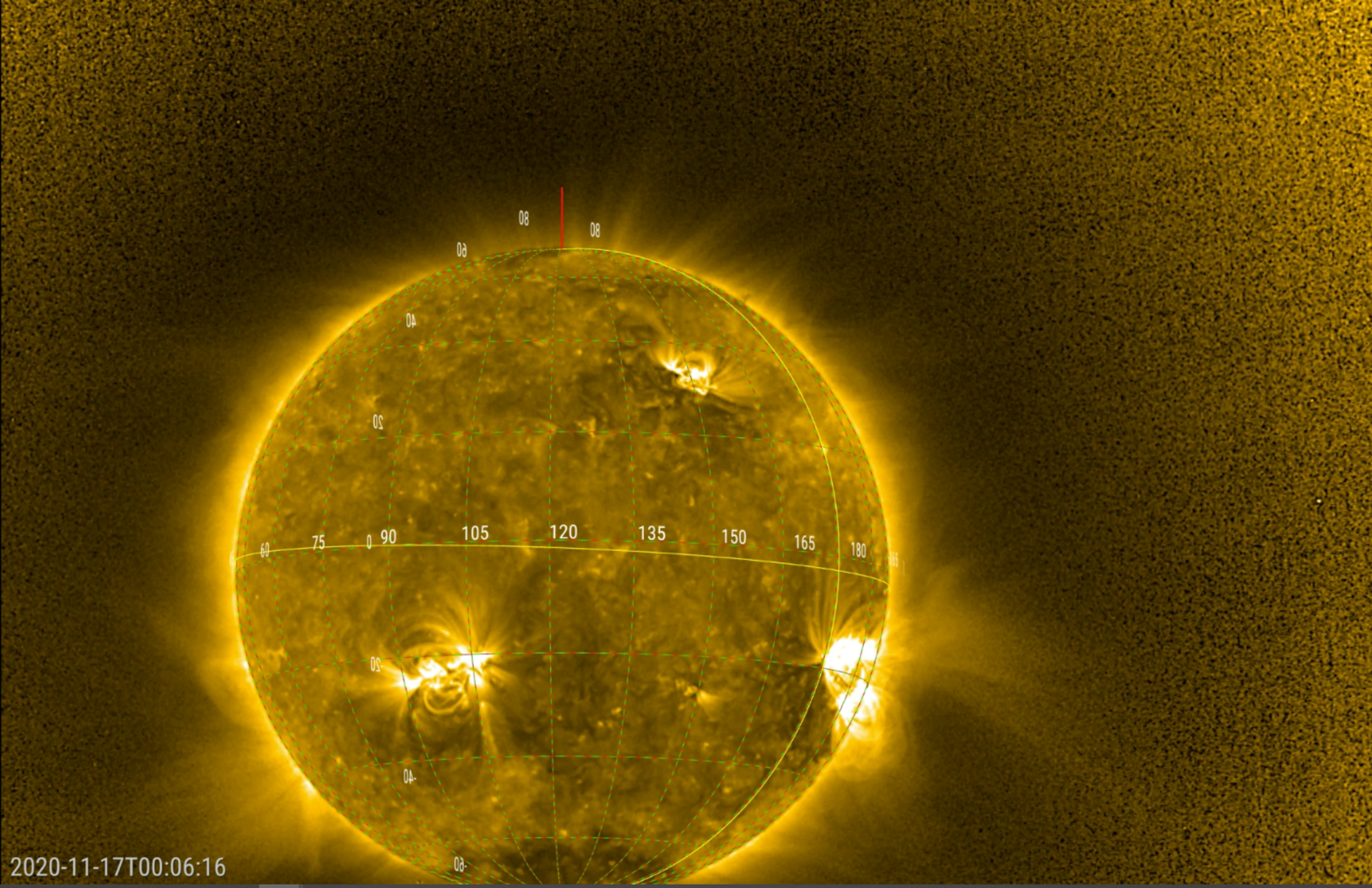 CMEs are an important part of ‘space weather’. The particles spark aurorae on planets with atmospheres, but can cause malfunctions in some technology and can also be harmful to unprotected astronauts. It is therefore important to understand CMEs, and be able to track their progress as they propagate through the Solar System.

Studying CMEs is just one aspect of Solar Orbiter’s mission. The spacecraft will also return unprecedented close-up observations of the Sun and from high solar latitudes, providing the first images of the uncharted polar regions of the Sun. Together with solar wind and magnetic field measurements in the vicinity of the spacecraft, the mission will provide new insight into how our parent star works in terms of the 11-year solar cycle, and how we can better predict periods of stormy space weather.