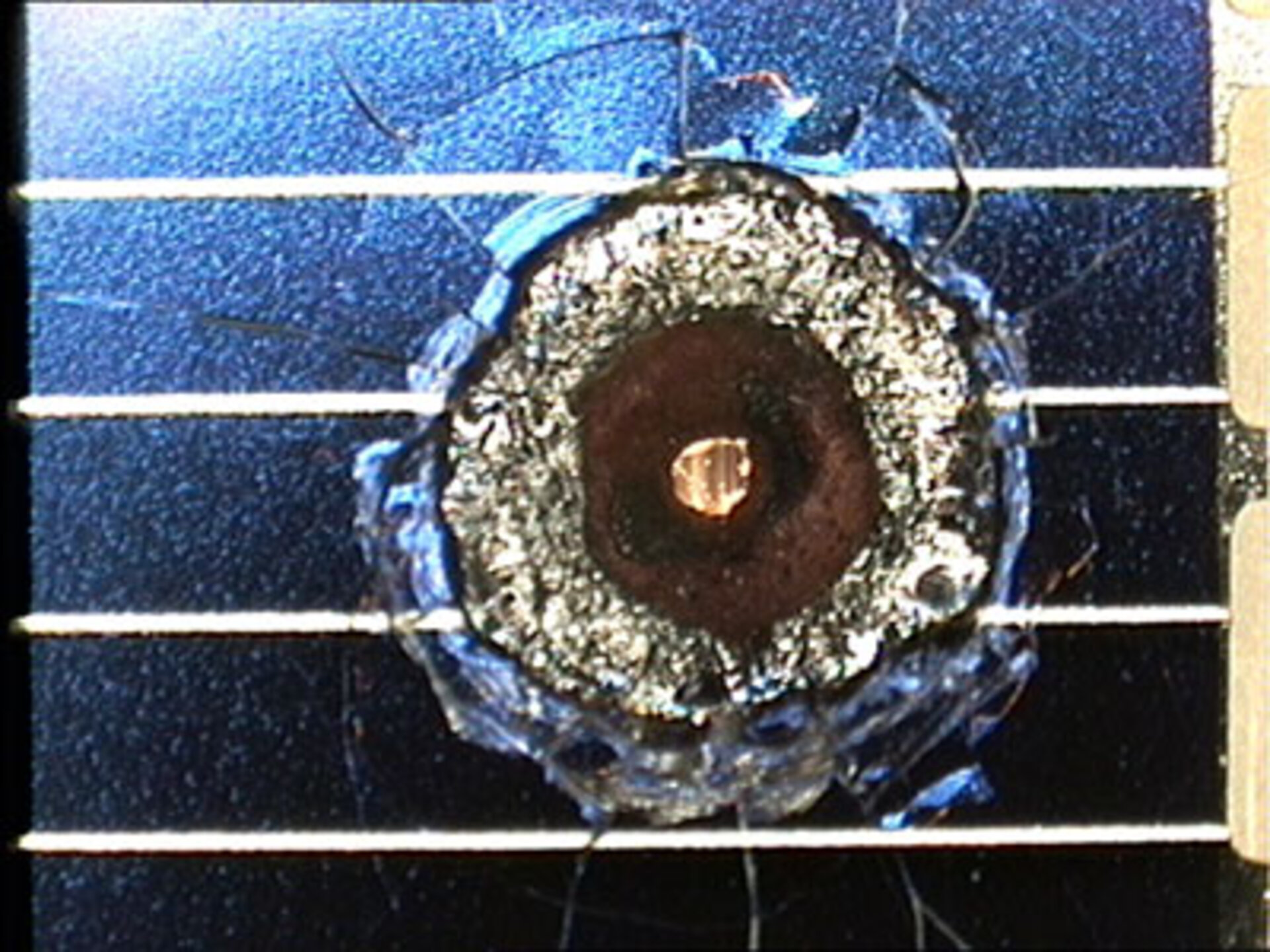 When an object hits a spacecraft at high speed, the result depends mainly on what is hit, and on the relative size of target and the ‘impactor’ (the object doing the hitting).

Impacts can have several direct and indirect effects. If the target is relatively thin, the impactor will punch a hole in the target, or cut through it. Examples are penetrations of solar cells, cutting of cables or spring wires, and the severing of tethers. A target can usually be punctured by an object larger than about a third of the target thickness.

If the target is thick or the impactor is relatively small, the result is degradation of surfaces or sensors. Examples are craters on thermal blankets, windows, mirrors and sensors, or the destruction of sensor CCD pixels.

If a 'large' object of several millimetres or centimetres in diameter hits a spacecraft then the impact can result in severe structural damage, or even destruction. Because of the high speed, the kinetic energy of a hypervelocity impact is very large. An impact of this type would be more like an explosion. As an example, a 1 centimetre sphere moving at 10 kilometres per second has an impact energy corresponding to the explosive force of a hand grenade.

Even if the spacecraft is not damaged, there are other effects that could cause problems. The momentum transfer during impact can lead to a disturbance of the spacecraft attitude and could disrupt formation flying. Creation of short circuits in solar arrays along the impact hole can damage systems, cause loss of power and cripple a spacecraft. Every impact creates an ‘impact plasma’ which can lead to electrical ‘noise’ in circuits and interfere with experiments. The impact plasma can also trigger a bigger electrostatic discharge if the space environment had charged up the spacecraft beforehand.

However, the greatest cause for concern is the puncture of pressurised items on spacecraft. Puncture of manned modules will lead to the loss of air; punctured pipes of a thermal control system will lose their coolant; and a pressurised tank can explode even if the outer wall suffers only a tiny puncture.

At ESA’s European Space Research and Technology Centre (ESTEC) in the Netherlands, HVIs can be modelled by numerical simulations and by ground tests. With light gas guns particles up to 1 centimetre in size can be propelled into targets at up to 8-9 kilometres per second. Studies are ongoing to extend the velocity to 10-12 kilometres per second with new techniques. Although ESA has no internal HVI facilities, ESA scientists manage ground tests at several test sites in Europe. Light gas guns exist at the Ernst-Mach Institut (Germany), CISAS (Italy), Centre d’Etudes de Gramat (France), The Open University and University of Kent (UK). Electrostatic accelerators, which have also been used for HVI tests, exist at the Max-Planck Institut für Kernphysik (Germany), The Open University and the TU Munich. Small particles in the micron size range can be accelerated electrostatically up to 100 kilometres per second.

Numerical simulations can be performed with so-called ‘hydrocodes’. These computer model codes for HVI impacts have been applied to many applications, and comparisons with real HVI tests have shown that they can produce realistic results. On the other hand, use of these tools does require expert knowledge and there is still some way to go before some phenomena, such as the shattering and cracking of brittle materials like glass, can be realistically simulated.

HVI modelling for space is similar to modelling done by ballistic scientists when designing weapons and armour protection for military applications. The HVI guns for larger particles and the hydrocodes were initially developed for military or other non-space applications. However, hypervelocity debris and meteoroid particles in space move about 10-20 times faster than a gun bullet!

Measures taken to protect spacecraft include ensuring adequate material thickness, or augmenting the spacecraft structure with a 'bumper shield' to take a large fraction of the impact energy. Such bumper shielding was successfully employed to protect ESA’s Giotto spacecraft in its high-velocity close fly-by of Comet Halley in 1986 and is extensively used on the International Space Station. Engineers at ESA must make detailed analyses of the risks to missions, taking account of the meteoroid and debris population and data on how the damaging properties of particles depend on their sizes and speeds.