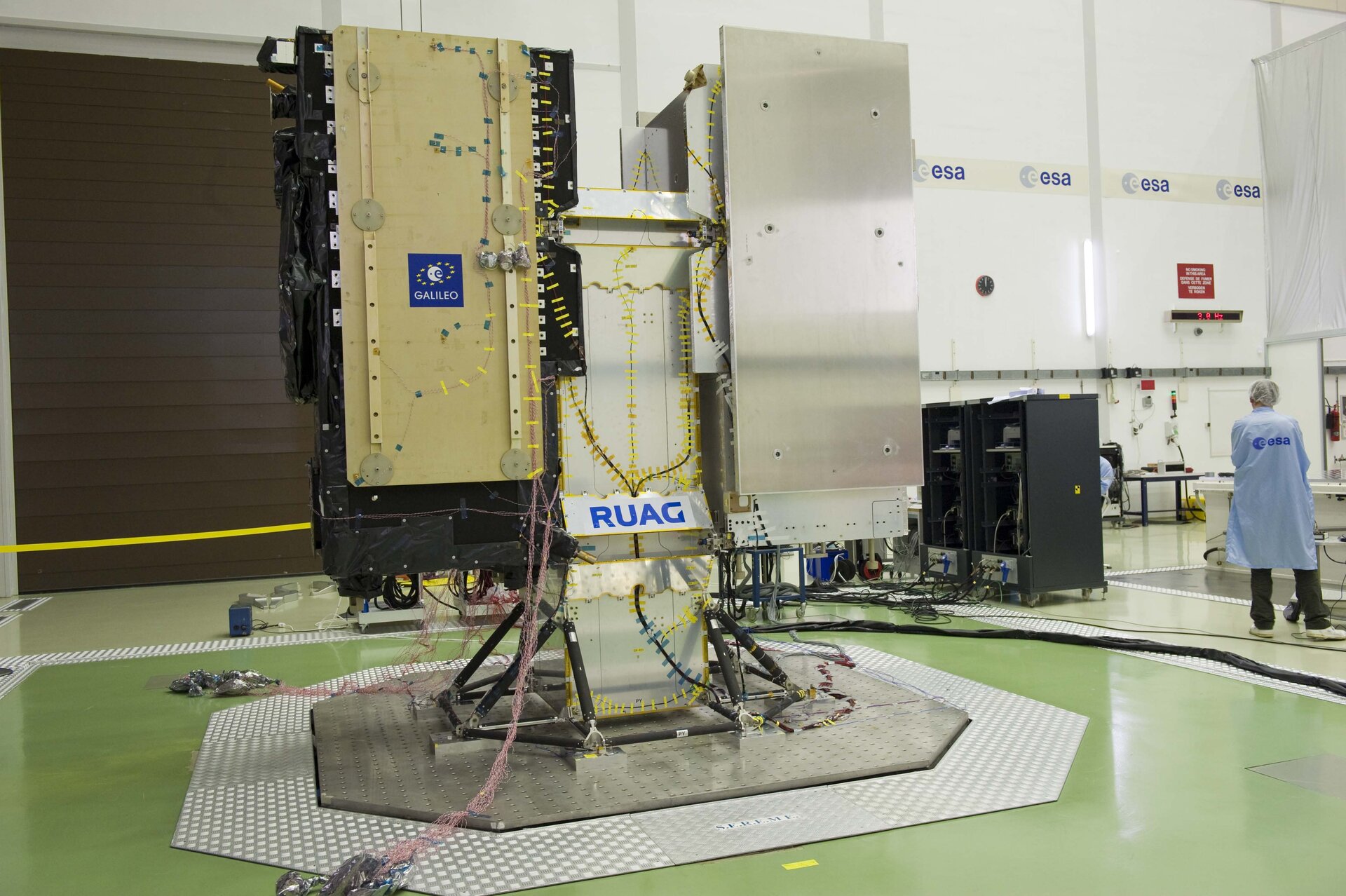 Paving the way for 2011’s first launch of Galileo navigation satellites, ESA’s technical base in the Netherlands is testing an essential device that will secure the paired satellites in place during launch and then release them into orbit.

Next year the first two Galileo In-Orbit Validation (IOV) satellites in Europe’s global navigation system will share a flight on a Soyuz launcher from Europe’s Spaceport in French Guiana.

The ‘dispenser’ supporting structure will hold the twin satellites firmly in place under the Soyuz fairing during launch, having already provided connection to power and data links during the pre-launch phases on the ground.

This month the Test Centre at ESTEC, ESA’s technical centre at Noordwijk, the Netherlands, is hosting vibration and shock tests of the dispenser, as part of the qualification process needed for before new hardware can launch.

The ESTEC Test Centre is a unique European facility that combines a complete portfolio of space simulation facilities under a single roof.

“It has been developed by RUAG Space of Sweden on behalf of launch service provider Arianespace, with RUAG in Switzerland responsible for the structure and EADS CASA in Spain overseeing the hold-down and release system, which is also a new development for Galileo.

“The dispenser design had to comply with very stringent mass and volume requirements. Although designed for the initial IOV launches, this dispenser is actually also the baseline for the follow-up full operational capability flights on Soyuz.”

The dual dispenser configuration was driven by a requirement for the satellites to be additionally compatible with a multiple launch on top of an Ariane 5.

In order to gather representative results during this test, a qualification model of the flight dispenser, built to the same standard as the flight model, is being tested in conjunction with a pair of engineering models of Galileo IOV satellites, respectively the Structural Model (SM) and Structural and Thermal Model (STM).

The combined dispenser and Galileo satellite stack is subjected to launch vibrations using the QUAD shaker. Connected to a quartet of four electrodynamic shakers, each capable of producing 160 kilonewtons of force, the QUAD can simulate accelerations of up to 20 g.

“Our testing on the QUAD has proceeded very well,” Mr Mendoza Hauptmann added. “Afterwards, the stack will be tested in the lateral direction on a second shaker, the dual electrodynamic shaker system.

“And later this month, we plan to perform a shock test based on simulating a satellite’s separation from the dispenser, in order to validate this process and to gather accurate data on the generated shock levels.”

These results will then be applied to tests scheduled of one of the first Galileo IOV satellites – the Protoflight Model – that is due to arrive at ESTEC for vibration testing early in 2011.

In parallel, the shock test allows the validation of the real release test employing the IOV PFM and dispenser flight model, which will be performed during January 2011.

This process has also served to validate all combined operations of the satellites and dispenser that will be performed during launch preparation at Europe’s Spaceport, since this has been the first time that these structures have been put together.