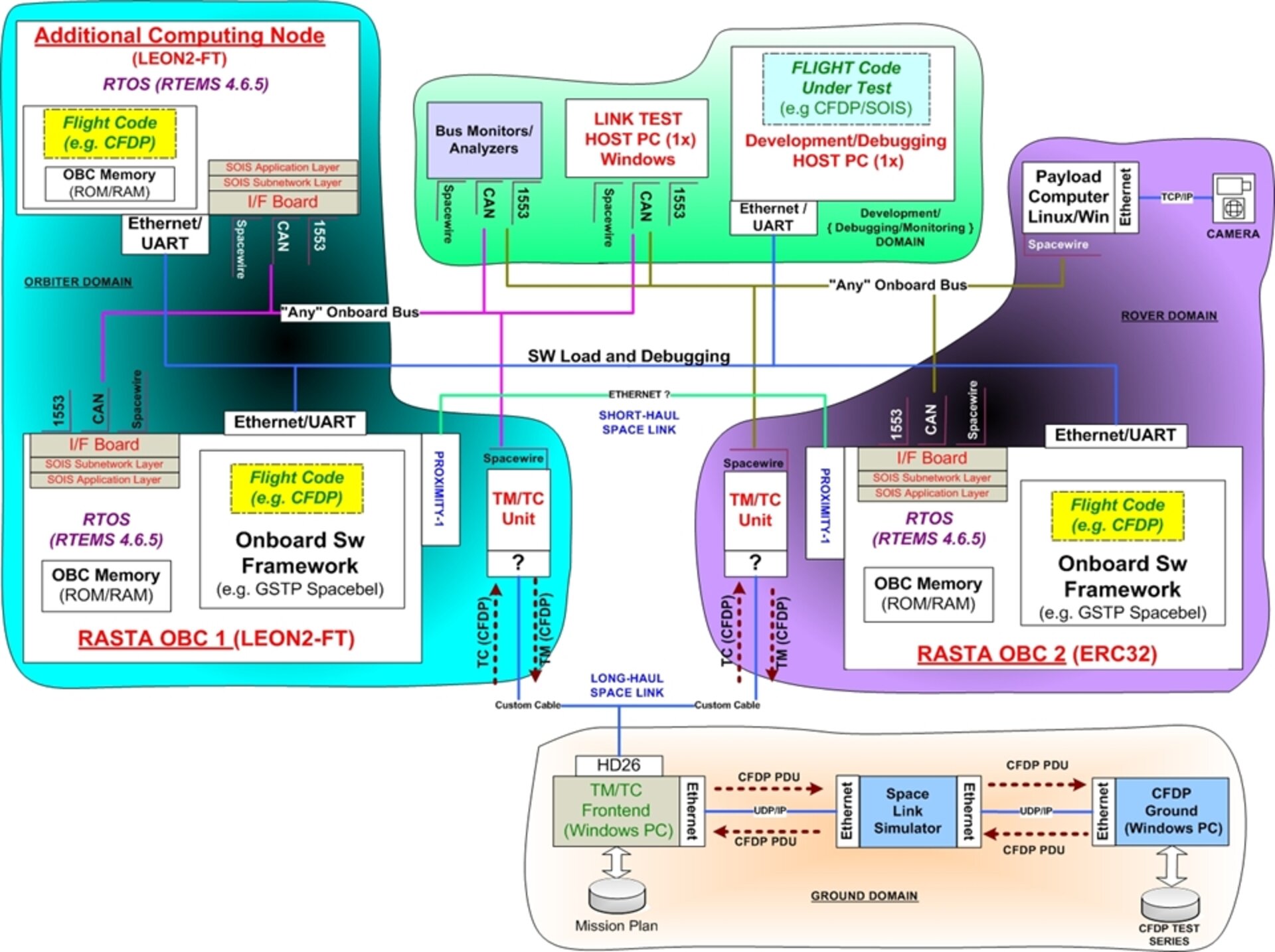 RASTA (Reference Avionics System Test-bench Activity) is a TEC-ED infrastructure for hosting, testing and validating hardware and software elements related to flight avionics. One of the main drivers for RASTA has been the need for an end-to-end reference system which can be used to integrate developments resulting from TRP and GSTP activities. RASTA objectives may be summarised as follows:

The end-to-end functionality of the RASTA system encompasses a Ground System communicating over a simulated TM/TC space link with one or more Flight segments. The thin arrows in the picture are to show the possible flow of TM/TC packets.

The end-to-end RASTA system aims to be representative of a scenario where a Mission Control Centre (MCC) communicates to one or more spacecrafts through a TM/TC space link. Initially, in a configuration where more than one flight segment is present, only one flight segment is directly connected to the Ground System through a TM/TC link. All the additional Flight Segments will be interconnected trough a simulated inter-satellite link (i.e. Proximity-1) but not 'directly' reachable from the Ground Segment. In the near future it is foreseen to have a TM/TC link also to a second Flight Segment. The following two pictures represent a view of the main HW and SW elements of RASTA and the way they interconnect.

The system can have two main configurations:

In the baseline configuration a ground segment is connected, through a simulated space link, to a single spacecraft made of two onboard computers (i.e. a CDMU and a Payload computer). While in the extended configuration the same ground segment is connected to two spacecrafts; respectively with two and one onboard computer (i.e. OBC 1 and OBC 2 as part of an Orbiter. OBC 3 as part of a Rover). This two configurations will be used to cover various scenarios; from a simple one with a single spacecraft hosting a main OBC and a payload computer, to more complex one with 2 spacecrafts representing the combination of an orbiter and a lander or a lander and a rover.

Software building blocks for RASTA are already available for the space community. The ESA space-qualified version of RTEMS 4.8 is fully supported, although all the RASTA SW assets are OS independent thanks to the use of an "Operating System Abstraction Layer (OSAL)".

OSAL library, originally developed by a NASA open source project, has been adopted as one of the software cores of the system. On-Board Computer and Data Handling Section at ESA is currently maintaining its own OSAL flavour. CCSDS Spacecraft On-Board Interface Services (SOIS) and CCSDS File Delivery Protocol (CFDP) libraries have already been developed for the system.