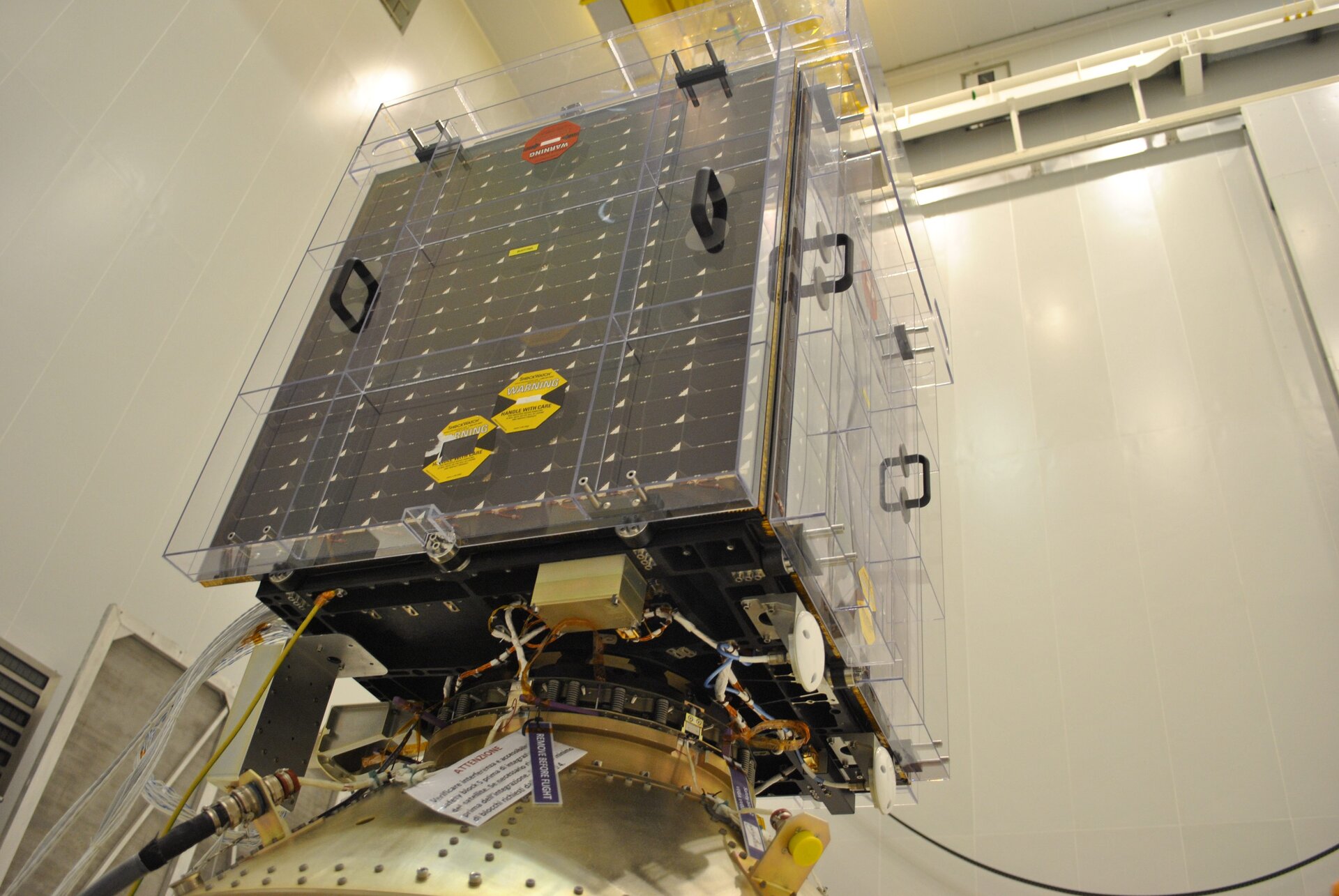 As ESA’s Proba-V minisatellite monitors terrestrial vegetation, it will also survey the space surrounding itself. A new detector chip based on technology first developed for CERN’s Large Hadron Collider is carried on the satellite’s exterior to measure space radiation.

Less than a cubic metre in volume, Proba-V is hosting five additional technology experiments along with its main vegetation-monitoring payload. These include two radiation instruments to sample the charged particles the minisatellite will encounter across its orbit.

The larger of the pair is the wide-view Energetic Particle Telescope built by a consortium led by QinetiQ Space in Belgium, the satellite’s prime contractor.

In addition, a smaller instrument based on a ‘Timepix’ chip complements the main radiation detector.

“The flight on Proba-V will be the first time this chip is exposed to outer space,” says Zdeněk Kozáček of the Czech Research Centre (CSRC), prime contractor for the SATRAM (Space Application of Timepix-based Radiation Monitor) payload.

Timepix uses a 256 x 256-pixel silicon sensor. The pixels – each about 55 micrometres square, around half the thickness of an average human hair – incorporate individual signal electronics, making them sensitive to individual quanta of ionising radiation.

The chip’s origin goes back to deep underneath the Swiss–French border: CERN needed a detector with sufficient sensitivity and dynamic range to gather snapshots of what would be coming from the Large Hadron Collider when it became operational.

“Having developed this technology, the Medipix collaboration was established to expand its usage outside the high energy physics field,” explains  Zdenek Vykydal of the Institute of Experimental and Applied Physics of the Czech Technical University of Prague (IEAP CTU), partnering with CSRC for SATRAM.

“The starting point was to apply it to X-ray radiography, but this state-of-the-art detector has turned out to be so powerful and flexible, the range of applications is really large.

“It’s been used for everything from composite materials testing to imaging insect bodies, from neutron tomography to examining antique paintings.”

A prominent member of the Medipix consortium, IEAP CTU has previously developed read-out interfaces, data acquisition and processing software for the family of chips, as well as advanced calibration methods.

This technology’s potential for space was clear, adds Carlos Granja of IEAP CTU: “Precise particle track pattern analysis – like reconstructing a road accident from skid marks – allows identification of the types and energies of charged particles, as well as tracing back their trajectories to provide a sky mapping of their source of origin.

“Working with NASA and the University of Houston, these same chips are already flying in space, serving as highly miniaturised dosimeters for crewmembers of the International Space Station, though these are installed inside pressurised modules rather than outside in open space.”

The SATRAM detector attached to Proba-V is a highly compact 350 g payload running on just 2 W of power, designed to perform precise measurements of the space radiation environment for space weather monitoring as well as satellite operations.

“The detector is really more of a platform device than a scientific instrument,” adds Mr Vykydal. “We want to monitor radiation that could interfere with satellite functioning, so future missions might fly with it as standard.”

In the first phase, the SATRAM team will demonstrate the payload’s operations in space, retrieving all results from the chip for analysis, progressing to a second phase where algorithms will be uploaded for automated onboard analysis, with only end results returned to Earth.

Proba-V’s 820 km-altitude polar orbit is expected to encounter a wide range of radiation levels – its orbit regularly passes through the South Atlantic Anomaly, a ‘dip’ in Earth’s magnetic field where the charged particle flux is orders of magnitude higher.

“We were glad of the opportunity to fly, though it made for an extremely challenging development schedule,” explained Mr Kozáček, who oversaw the design, assembly and validation of the payload. “The contract was signed at the end of 2011 and the flight hardware was being integrated onto the satellite nine months later.”

A private company, CSRC’s history in space far predates the Czech Republic’s 2008 membership of ESA. Founded in 1994, it contributed instrument hardware to ESA’s Integral X-ray observatory, part of a propulsion unit to the Agency’s SMART-1 Moon mission and Langmuir probes to France’s Demeter experimental earthquake-detector, as well as similar hardware to ESA’s Proba-2.

CSRC, working with Faculty of Nuclear Sciences and Physical Engineering of the Czech Technical University in Prague, is also contributing through Astrium to the Atomic Clock Ensemble in Space experiment destined for the Space Station, which should measure time more accurately in space than ever before.