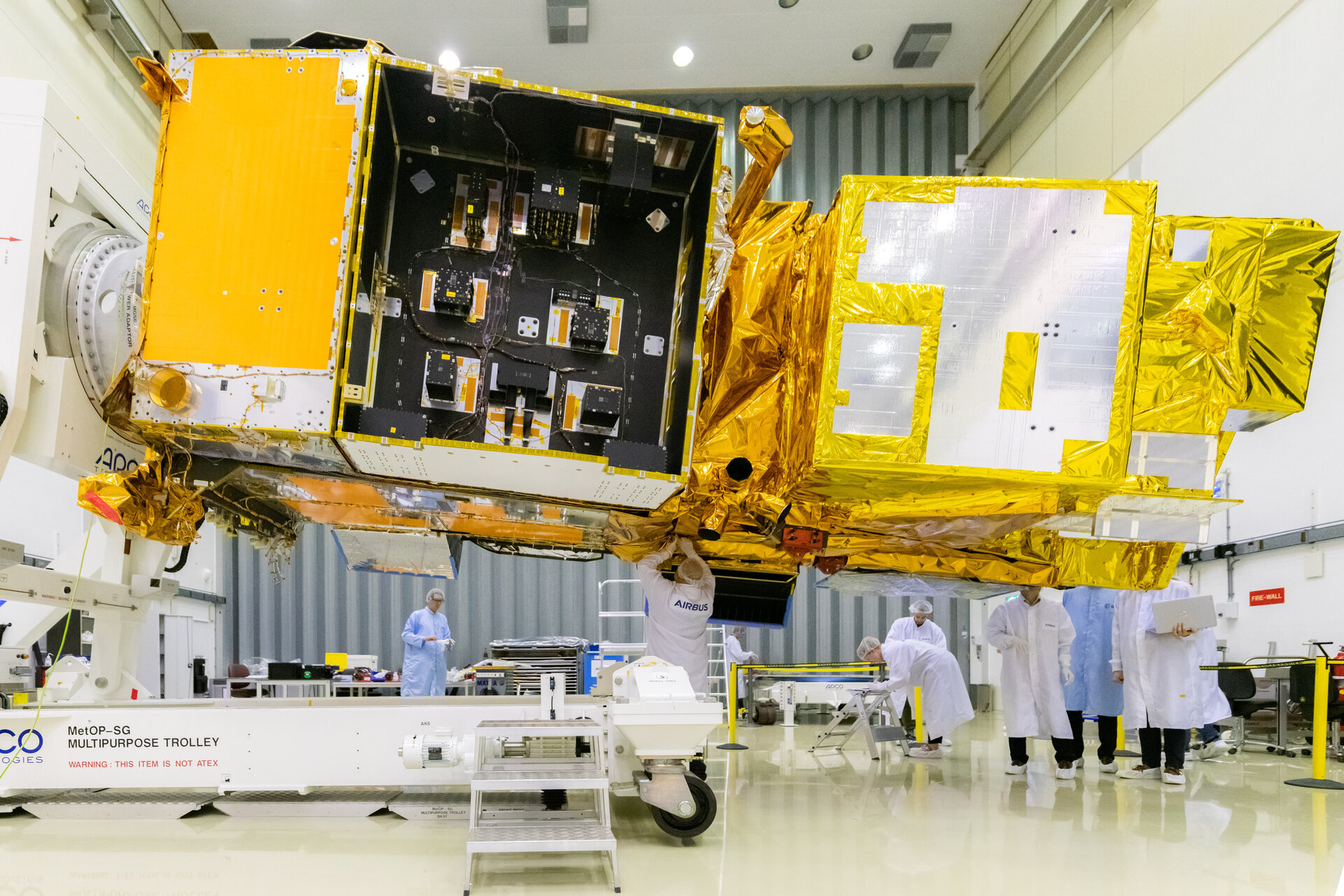 ESA’s ESTEC Test Centre in the Netherlands has completed its initial test campaign for the future of European weather forecasting – MetOp Second Generation.

MetOp Second Generation (MetOp-SG) is a follow-on system to the successful MetOp satellites, the last of which launched into its 800 km polar orbit in 2018.

MetOp-SG is Europe’s component of the Joint Polar System, which is a collaboration with the US.  Eumetsat, the European Organisation for the Exploitation of Meteorological Satellites, operates the MetOp satellites and is responsible for developing the ground segment of the system and delivering the meteorological data to the world-wide user community. ESA is responsible for designing and manufacturing the space segment of the system – the satellites themselves.

For this campaign the test item was not flight hardware but a prototype version specially built for initial testing, known as the ‘structural and thermal model’ (STM).

This initial MetOp-SG satellite, standing 6.5m high and weighing in at 4.4 tonnes including propellant, was shaken, shocked and placed in prolonged vacuum under simulated sunlight to demonstrate the design’s qualification for launch and readiness for space.

The MetOp Second Generation mission is actually made up of two different satellites each with different suites of instruments onboard.

“Our STM is actually a hybrid of these two satellite designs,” explains Nick Goody, the mission’s propulsion and assembly integration and testing engineer.

“The two satellites have a common platform, while the STM is equipped with the nadir-pointing instruments from satellite-A plus payload unit items from satellite-B, including amplifiers and power supplies.  This hybrid configuration results in the maximum mass and power dissipation for the STM testing, intended for mechanical and thermal qualification.  Those qualification objectives not covered by the STM will be addressed by the SAT-A and SAT-B proto-flight models.”

The test campaign began at the Toulouse facility of Airbus Defence and Space in December 2018, where dummy units, thermal hardware and electrical harness was integrated, together with the propulsion module supplied by Airbus’s facility in Stevenage, UK. This was followed by integration of test models of the instruments and the completion of its ‘harness’ – the maze of wiring connecting everything together – and its multi-layer insulation wrapping.

“A micro-vibration test campaign was performed to characterise the transfer functions between the instruments and other microvibration exporters such as the reaction wheels,” said MetOp-SG satellite engineering manager Enrico Corpaccioli.

“These measurements allow us to better analyse the effects of micro-vibrations on the instruments during the operation of the satellite when it is in orbit.  Alignment measurements were also performed to provide a reference before environmental testing began.”

Then, in June 2019, the STM was transported to the ESTEC Test Centre in Noordwijk. The largest satellite test site in Europe, the centre is equipped with facilities to simulate every aspect of the space environment under a single cleanroom roof.

Here it was unpacked for vibration testing.  It was then filled with 760 kg of demineralised water, in place of the hydrazine propellant it will be fuelled with before launch, for ‘sine’ testing along each axis – undergoing a progressive sweep of frequencies and amplitudes to hunt out any potentially harmful structural resonances.

“Qualification levels are applied to the STM structure,” adds Nick, “meaning that the amplitudes are significantly above the expected flight levels and the durations are longer in order to demonstrate the necessary margin in the design.”

A ‘quasi-static’ load test was also performed.  Satellites are exposed to simultaneous static and dynamic loads during the launch phase due to launcher acceleration and aerodynamics. This quasi-static load test combines static and dynamic loads into an equivalent load which is applied to the satellite in a high amplitude sine burst over a few seconds.

A rocket launch is an extremely noisy event, so MetOp-SG was then transferred to the Large European Acoustic Facility. Here nitrogen is passed through massive acoustic horns within a sealed chamber, recreating the sound of a launch.

The next step was a ‘fit check’ and separation test, involving mating the satellite with a launcher adapter provided by Arianespace, to guarantee the two designs fit together as intended and that the ring securing the satellite to the launcher – known as the clampband – operates correctly so that the separation can occur without any problem.

Next came the thermal test phase, which saw MetOp-SG moved into the Large Space Simulator, the largest vacuum chamber in Europe, equipped with a solar simulator based on an array of high power lamps.

A number of orbits were simulated in various hot and cold conditions until ‘thermal stability’ was achieved within set levels. The results from this test allows experimental correlation of the spacecraft mathematical thermal model, used to verify the thermal control design.

Testing concluded with further alignment testing – to check the model had endured its test regime without structural deformation – and a ‘leak check’ involving filling the propulsion module with helium gas.

“This test campaign has provided important qualification data,” adds Nick, “allowing correlation of the models with representative test data and confirming the analysis performed during the design stage. The structural thermal model has now been transported back to Toulouse in France, where the instrument models, propulsion module and dummy units are being removed.

“The satellite STM structure and propulsion module will be returned to their suppliers for refurbishment, as they are destined to be employed in MetOp SG-A’s second flight model.”

A tale of two MetOp-SGs

MetOp-SG is projected to enter service in 2023.