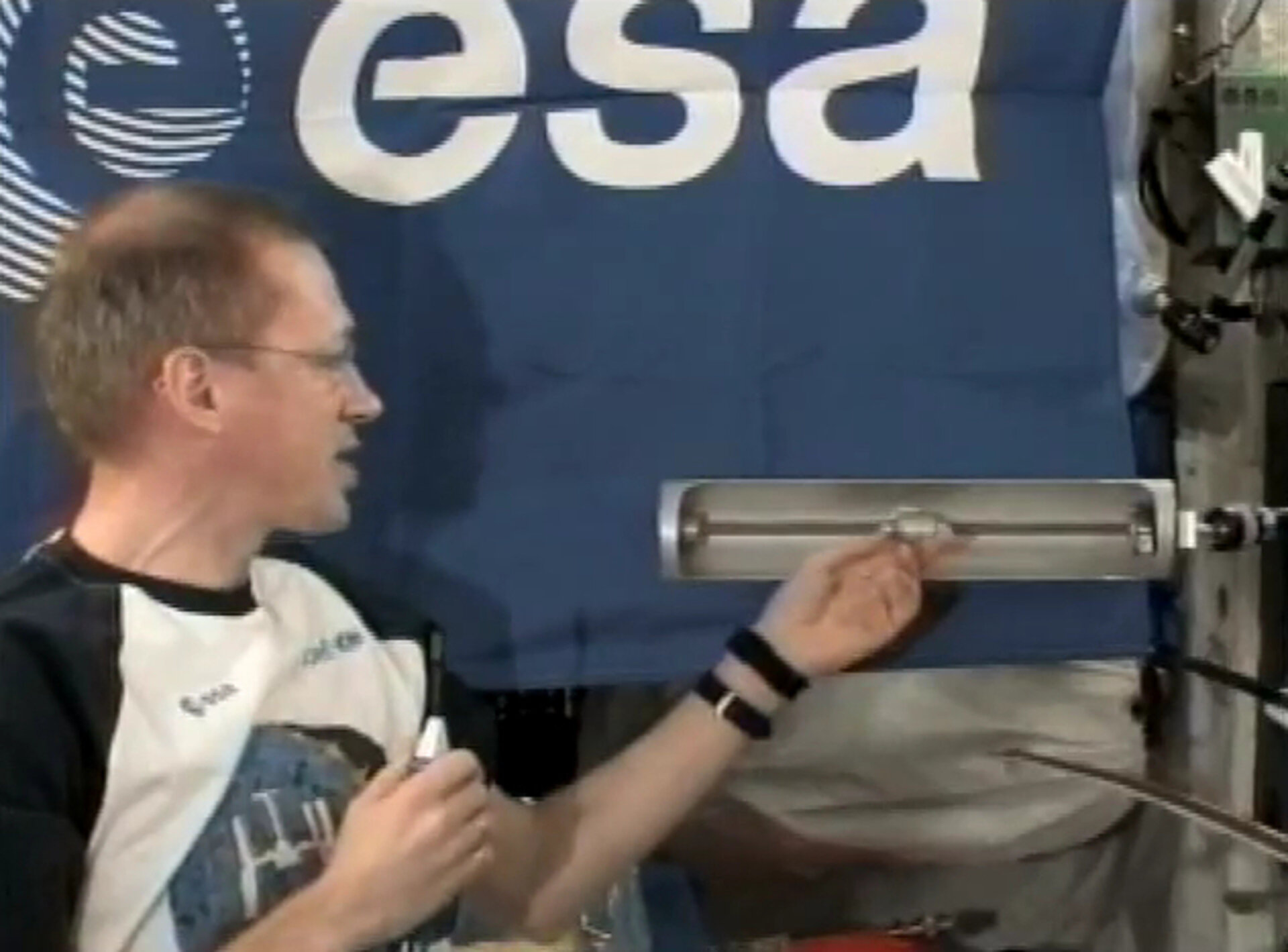 In space, many things work differently, but not always. Take the movement of liquid in fine tubes. Gravity has something to do with this capillary action, but what? Students using ESA’s 'Take Your Classroom into Space' kit can now find out.

Back in 2008, ESA invited European educators to come up with ideas that use the International Space Station (ISS) to illustrate the effects of weightlessness to students. The proposals had to meet ISS safety regulations and strict weight limits and be easy enough to conduct in space and in the classrooms by students at all levels, from primary to secondary school. Curriculum topics proposed ranged from physics and life sciences, through to arts and technology.

Two experiments were chosen and performed by ESA astronaut Frank De Winne during his 6-month stay on the Space Station in 2009.

The first experiment, proposed by Theodoros Pierratos of Greece, Anicet Cosialls from Spain and Mieke Recour in Belgium, looked at calculating the mass of an object in space by timing its oscillations on a spring. It was conducted in a live link from the ISS last September. The experiment clearly illustrated the difference between the concepts of weight and mass.

The second experiment, by Belgian teacher Jef Luyten and his Italian colleague Luigi Lombardo, was about capillarity. Here on Earth, the capillary effect can be seen in fine tubes containing liquid: surface tension pulls the liquid column up until there is a sufficient mass of liquid for gravity to overcome the intermolecular forces. As the mass of the liquid column is proportional to the square of the tube's diameter, a narrow tube will draw a liquid column higher than a wide tube.

The videos are a vital part of the 'Take Your Classroom into Space' activity, because Frank De Winne conducted the experiment using almost the identical standalone Education Kit that you can order now for your classroom.

The Kit can be ordered via the online form (see link on the right). It contains all the elements needed to perform the same demonstrations on the ground and allows European secondary school students (14 to 18 years) to compare their results with those obtained by De Winne on the ISS, helping students to learn about the conditions of free-fall.

The kits will be distributed for free to European teachers on a first-come, first-served basis, but the experiments are also easy to do even without it, with typical equipment used in physics lessons. The teaching guides, written by European teachers, can be downloaded from the links on the right. They are available in Dutch, English, French, German, Greek, Italian and Spanish.

The guide provides step-by-step instructions to help perform the demonstrations, exercises and questions, as well as an introduction to ESA, the ISS, and the free-fall environment – not exactly the same as zero gravity or weightlessness!

A video of the 'Do objects have weight in space?' experiment performed by De Winne on the ISS is available for direct download below (or view via link at right):