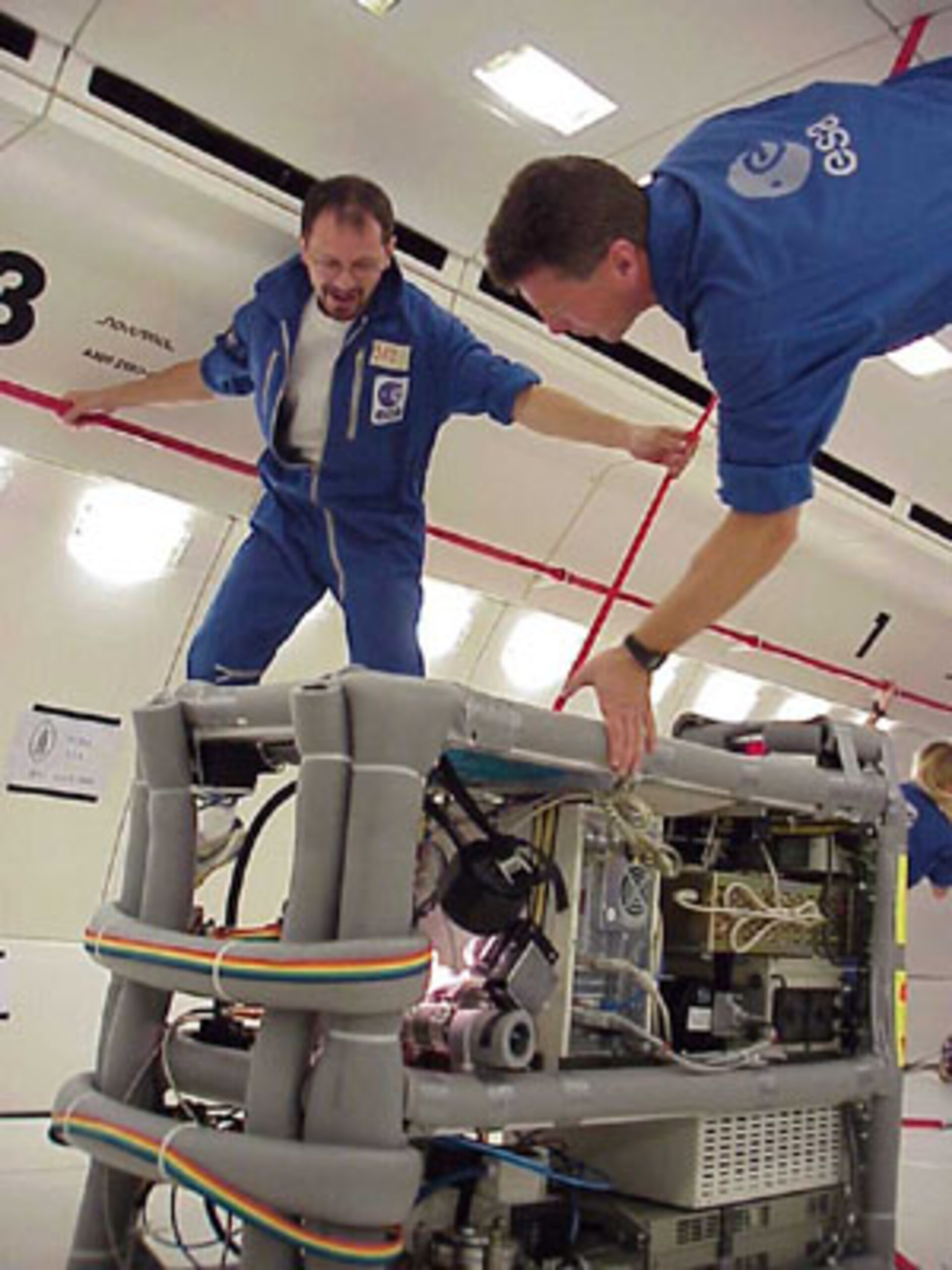 Freed from the grip of Earth's gravity, astronauts find themselves in a living physics textbook. The laws of motion eluded the best minds in the world for millennia until Isaac Newton discovered them in the seventeenth century. But in the weightlessness of orbit, those laws are glaringly obvious - and often very vexing.

Russian cosmonaut Yuri Gagarin, during his pioneering first orbit of the Earth in 1961, was the first to experience the practical effects. He put down his pencil while writing his log. Obeying Newton's first law - the same principle of uniform motion that keeps the planets moving around our Sun - the pencil floated out of reach: Gagarin had to complete his log by speaking into a tape recorder. Nowadays astronauts keep equipment in place with Velcro or bungee straps.

Newton's Second Law states that force is needed to accelerate or decelerate a body. In practice this means astronauts must learn how to push themselves carefully through their spacecraft, or else they will simply float around helplessly. And once astronauts get moving they have to remember to stop themselves as they near where they want to be. Otherwise they'll keep going until they hit something - or someone. First-timers tend to collect a lot of bruises. Some animals flown in space never get the hang of it - one set of new-born quails couldn't adapt to life aboard Russia's Mir space station and died after just a few days.

Newton's third law states that for every action there is an equal and opposite reaction. This, too, has very apparent consequences for astronauts: if they so much as try to turn a screw without anchoring themselves to a wall, they'll find themselves twisting instead. The reaction from even the mildest of actions - typing at a computer keyboard, say - will send an astronaut floating away. That's why workstations on the ISS are generously provided with restraining loops where the crew can anchor their feet.

It's not that the laws of motion are any different on Earth than in space. But Earth's gravitational field has such an overwhelming force it masks their precise effects. And gravity is integral to all sorts of phenomena that we take for granted. For example, the air in our homes circulates naturally: hot air rises because it is lighter than cool air, and convection currents form. In orbit, nothing is lighter than anything else, so ordinary convection currents can't exist. Without a ventilation fan, sleeping astronauts would suffocate in the carbon dioxide that accumulates around their faces.

Similarly, weightless flames behave very differently from their Earth-bound counterparts. Instead of a flickering column of hot gas, differentiated in colour and content by gravitational effects, a flame in orbit is a small blue sphere. (And it had best be confined to a laboratory experiment: an actual fire aboard a spacecraft is something all astronauts dread.)

The ISS itself, of course, is a perfect expression of the laws of motion. Struggling against centuries of intuition and common sense, Newton realised that a bullet shot from a gun ought to continue to move indefinitely. Of course, on Earth the force of gravity soon pulls it to the ground, and atmospheric friction would slow the projectile in any case. But the faster you can shoot the bullet, the farther it will travel before it hits the ground. And if you can accelerate your bullet - or more usefully, your spacecraft - to a speed of around 8 km/s, it will never finish its trajectory. Instead, it will orbit the Earth in a state of perpetual free fall. Its velocity exactly cancels the pull of the Earth's gravity: which creates the simultaneously vexing and exciting world that astronauts contend with and enjoy.