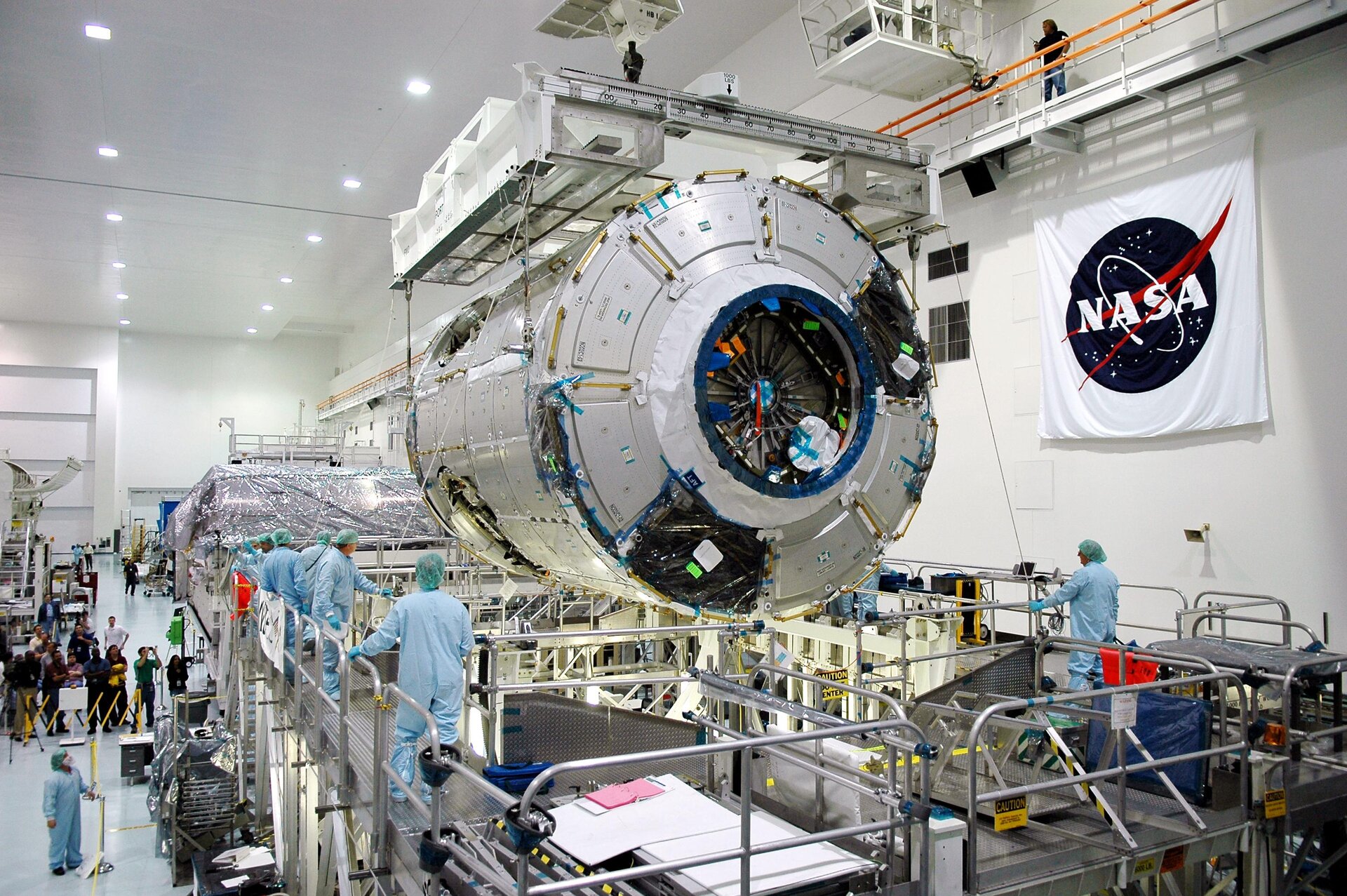 The European-built Node 2 is one of the three International Space Station Nodes. The Nodes are the interconnecting elements between the Station's pressurised modules.

The on-orbit resources that Node 2 provide include the distribution of electrical power and thermal and environmental control. Node 2 also provides a working base point for the Space Station’s robotic arm.

Node 2 consists of a pressurised cylindrical hull 4.6 metres in diameter with a shallow conical section enclosing each end. It is just over 7 metres long and weighed around 14 tonnes at launch. The pressurised shell of Node 2 was constructed from aluminium alloys. This was covered with a multi-layer insulation blanket for thermal stability and a further 98 sections of panelling to act as a protective shield against bombardment from space debris.

This panelling is also constructed of an aluminium alloy together with a layer of Kevlar and Nextel. Heat exchangers between the external panels and the pressurised shell of Node 2 help to disperse excess heat from its internal equipment and attached modules.

Node 2 can be considered in two halves. One half, with a single docking port where Node 2 docks with the International Space Station accommodates eight standard-sized racks, four of which will house systems, the other four of which can be used for either stowage or crew quarters.

The other half consists of an additional five docking ports one located on the other end section or cone and four arranged around the circumference of the cylindrical main body of Node 2. The docking mechanism on the end section will have a Pressurised Mating Adaptor attached to it to act as the principal docking port for the Space Shuttle.

On the cylindrical main section of Node 2, two of the docking ports can be used to accommodate the attachment of two permanent laboratories: the European Columbus laboratory, which was launched in February 2008 on the STS-122 mission with ESA astronauts Hans Schlegel and Léopold Eyharts; and the Japanese Experiment Module Kibo that was launched in March 2008. A third port can accommodate the European-built Multi-Purpose Logistics Modules (MPLMs) that traveled in the Shuttle's cargo bay, or the Japanese H-II Transfer Vehicle (HTV) a logistic supply craft similar to the European Automated Transfer Vehicle (ATV).

The fourth docking port on the main body of Node 2 has no permanent can be used as a backup port since the docking mechanism on a majority of the ports is the same. This port was be used on Space Station assembly flight 1J/A (STS-123) for temporarily docking the Japanese Experiment Logistics Module. This will be relocated on the Japanese Kibo laboratory when it is docked to Node 2 on ISS flight 1J (STS-124) in April 2008.

Node 2 has systems, which provide many different functions and resources to the attached laboratories and modules, and to itself, for maintaining a safe and ideal working and living environment onboard the International Space Station. These systems manage:

Two of the three Space Station Nodes (Node 2 and Node 3) were made under a contract in Europe, while Node 1, which has been in orbit since December 1998 was made under a NASA contract in the USA.

Nodes 2 and 3 are an evolution of Node 1. ASI and prime contractor Thales Alenia Space put forward a design for Nodes 2 and 3, deriving from the experience with the MPLMs, that took into account new habitability requirements, making permanent crew quarters possible for four astronauts with the capability to treat and recycle water, cater for personal hygiene and waste, jettison carbon dioxide and generate oxygen.