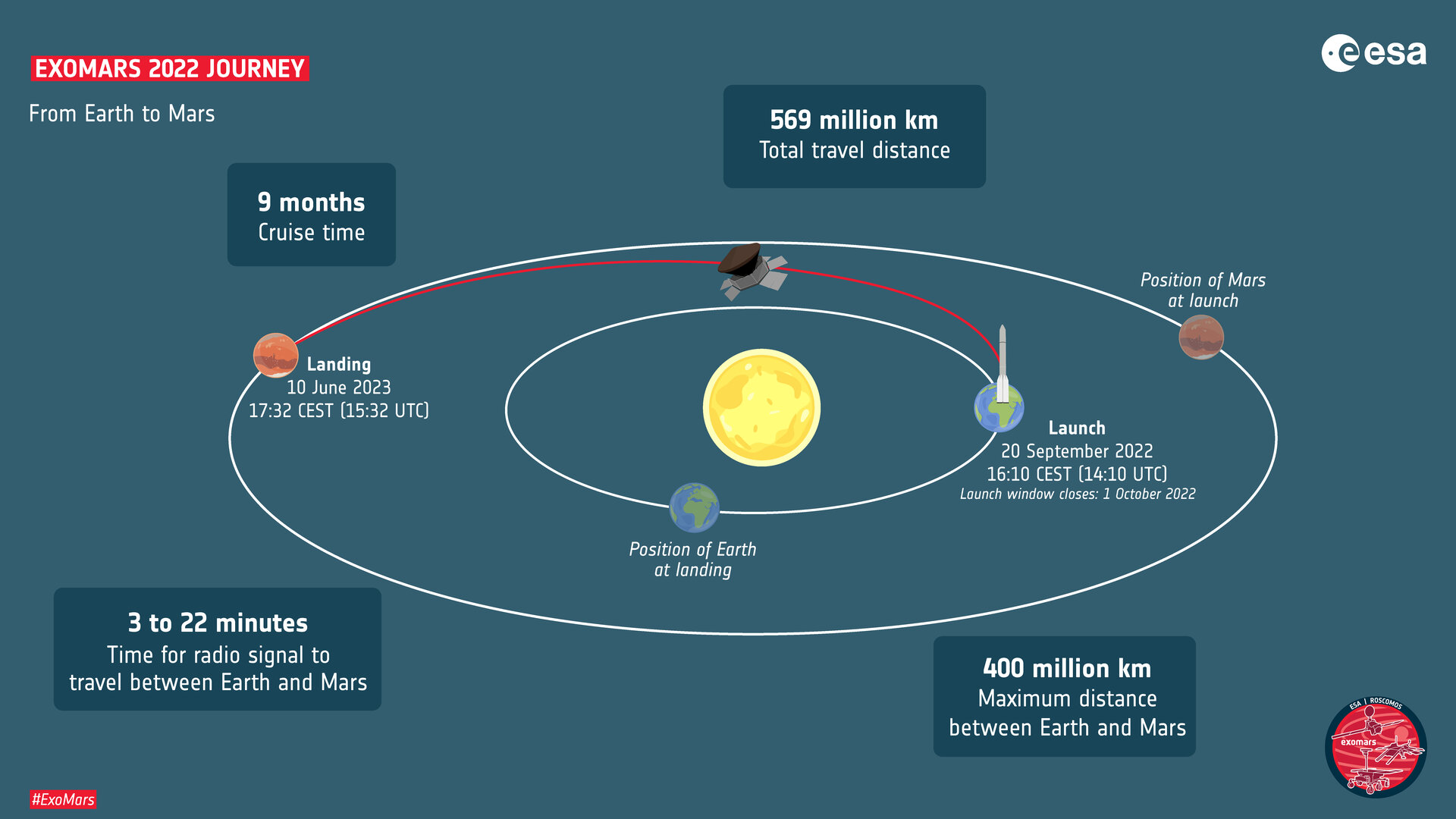 The path that ExoMars 2022 will follow to reach the Red Planet is set. The trajectory that will take the spacecraft from Earth to Mars in 264 days foresees a touchdown on the martian surface on 10 June 2023, at around 17:30 CEST (15:30 UTC).

The weather at Mars, the type of launcher and the laws of physics governing the planets determined a 12-day launch window starting on 20 September 2022.

Efficient orbital transfers, good communications and no large dust storms on the martian horizon make the chosen trajectory the fastest and safest choice.

When confronted with how to get to Mars, European and Russian teams have to juggle many factors. The mission analysis team at the European Space Operations Centre (ESOC) in Germany took into account the performance of Russia’s Proton launcher to identify a number of possible trajectories.

“We had several transfer trajectories to choose from and a spacecraft already built for the trip,” says Mattia Mercolino, ExoMars principal systems engineer. “These variables imposed on us constraints linked to power, temperature thresholds and orientation towards Earth during the first stages of the flight, among others.”

Being able to communicate with the spacecraft also played a major role.

“One of the alternatives had a longer launch window, but a worse connection with the spacecraft during the first days. This choice was too risky, especially when you want to have full control at the beginning of the mission,” explains Tiago Loureiro, ExoMars spacecraft operations manager.

The final trajectory takes a bit longer – one week more – and the launch sequence requires more manoeuvres, but this wasn’t only about earthly constraints. “We needed to understand the challenges unique to our destination. Mars orbital characteristics and dust storms were crucial to our decision,” says Tiago.

Riders on the storm

Dust storms are frequent on Mars, but also difficult to predict. Seasons play a role, with stormy weather more likely to happen during the spring and summer in the southern hemisphere. ExoMars landing site is Oxia Planum, located in the northern hemisphere.

Threatening global-scale dust storms tend to happen approximately every ten years. The most recent one was in 2018.

Although ExoMars will land outside the dust storm season, a build-up of dust on the solar panels will reduce power supply and could even force a temporary shutdown of ESA’s Rosalind Franklin rover and the Russian surface platform, dubbed Kazachok.

“We went through a number of studies and tests to ensure that all systems would survive with reduced sunlight upon the late afternoon landing, and during surface operations the following weeks,” adds Tiago. 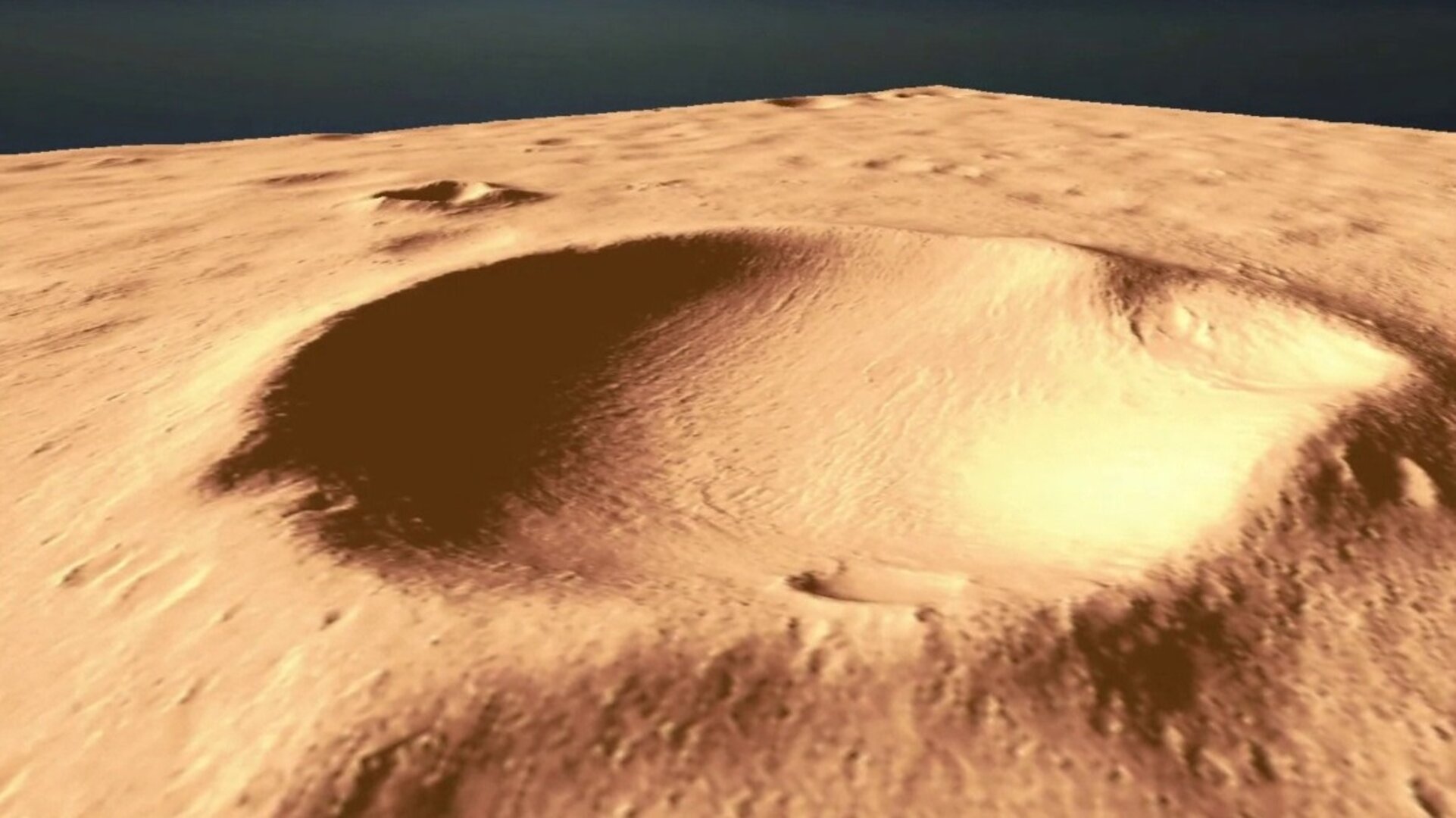 Fly over the ExoMars rover landing site
Access the video

European scientists want to operate the rover on Mars for as long as possible. Rosalind Franklin can cope with regional dust storms for a few days and with layers of fine dust covering its solar panels.

“A global dust storm that blankets the atmosphere for several months would most likely result in the death of the rover,” warns Jorge Vago, ESA’s ExoMars rover project scientist.

“That is why it is so important to achieve most of the mission objectives before the problematic dust season starts,” he adds.

It took the teams at ESOC a few months of work to narrow down the final launch date and trajectory to Mars. “The whole challenge is fantastic – I think I have the best job in the world,” says Tiago.

“Launching a spacecraft, shooting it across the Solar System, hoping it lands in one piece, deploying it, driving it on Mars… And we will do all of this without the luxury of interacting with the spacecraft or the rover in real time,” he explains.

Sending the first European rover to Mars requires true teamwork. Each and every command has been carefully planned together with the Russian partners, involving several control centres and countries.

ESA will control the communications between Rosalind Franklin and the Kazachok surface platform during their first days on Mars. As part of the ExoMars programme, the Trace Gas Orbiter, which has been circling Mars for nearly four years, will serve as a data relay platform to support communications.

A few weeks after landing, and only when the surface platform is safe and able to operate independently, ESA will hand over the control of Kazachok to Roscosmos.

The ExoMars programme is a joint endeavour between the Roscosmos State Corporation and ESA. Apart from the 2022 mission, it includes the Trace Gas Orbiter (TGO) launched in 2016. The TGO is already both delivering important scientific results obtained by its own Russian and European science instruments and relaying data from NASA’s Curiosity Mars rover and InSight lander. The module will also relay the data from the ExoMars 2022 mission once it arrives on Mars.