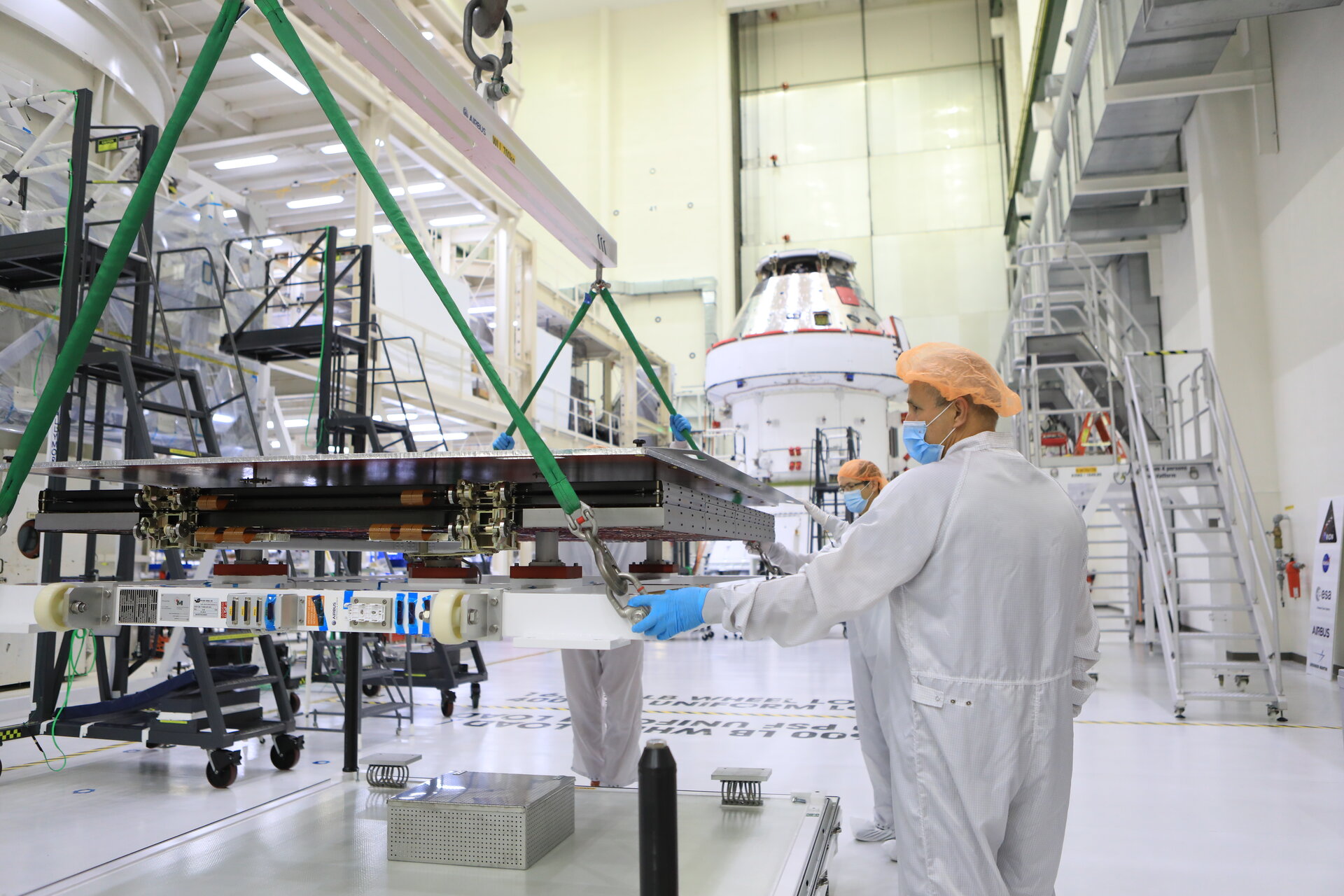 After two years of non-stop work at NASA’s Kennedy Space Center, Florida, and a trip to Plum Brook, Ohio, for testing, the next human-rated spacecraft to head to the Moon in over half a century is nearing completion. European and US technicians celebrated attaching the solar wings to the European Service Module that will power Orion on its first Artemis mission next year around the Moon.

With this operation the spacecraft is practically complete with most of the red “remove before flight” items now removed. These include the large red covers that are protecting the solar panels, the covers for the 33 engines that will propel and orient Orion around the Moon as well as sensors for navigation.

After 10 days of work  on the critical solar wings installation, the teams of NASA, ESA and Airbus contractors  completed installation and testing of  the four solar array wings.

“Orion has its four wings and is good to fly,” said Airbus integration and test director Rachid Amekrane, “It was tough work, but it was also fun - congratulations to all the teams!”

“The first Orion spacecraft is now practically ready for launch with all hardware in place,” explains Daniel Paris, ESA Assembly, Integration and testing manager, “The next phase will be the launch preparation phase that includes servicing  activities to fill the tanks.”

Richard Chase, ESA European Service Module Product Assurance Manager adds, “We will be pumping fuel, helium, nitrogen and ammonia for the cooling system and other consumables into the tanks, and later on conduct checkouts. The vehicle will then get prepared for launch on the SLS rocket.”

The European Service Module will be covered by the protective rocket fairing. From this point it will be difficult to access for viewing and it will be handed over to NASA’s ground operations team in the run-up to launch.

The Artemis I mission is set to launch next year on the Space Launch Systems rocket. Artemis II in 2023 will be the first flight test with a crew. In 2024, the first woman and next man will fly to the surface of the Moon on the Artemis III mission, and begin the establishment of sustainable exploration by the end of the decade.

Meanwhile back in Europe…

The countdown to the Moon starts in Europe with 16 companies in ten countries supplying the components that make up humankind’s next generation spacecraft for exploration.