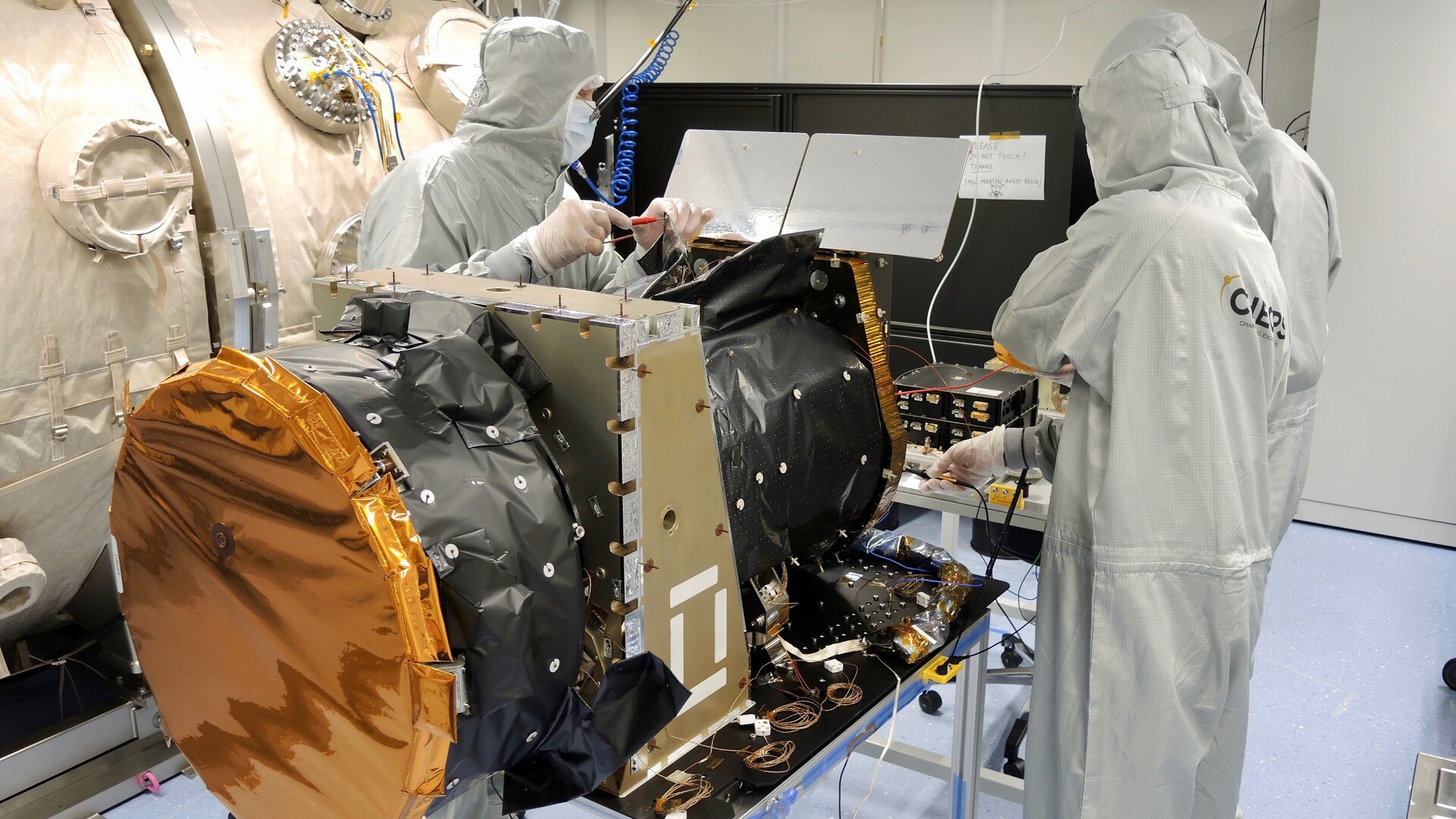 The design of Cheops was driven by the need to precisely measure the ‘signal’ from exoplanet host stars.

Precision is of particular importance because the transit signal can be extremely tiny for the smallest planets, and noise from the instrument itself can potentially obscure the transit. The instrument therefore needs to be as stable as possible, both in terms of keeping jitter to a minimum while observing the star in ‘stare and track’ mode, and in keeping cool to avoid thermally-induced noise.

Cheops has a single instrument: a high precision photometer with a 300 mm effective aperture telescope and a single charge-coupled device (CCD) detector covering visible to near-infrared wavelengths. A number of key elements of the Cheops instrument are designed to keep stray light, such as from the Earth and Moon, from entering the telescope. These include a large external baffle, a smaller internal one and vanes inside the telescope. Much as street lights make it harder for us to see the stars, stray light would reduce the observation ability of the telescope. The baffle has a cover to protect the optics from dust and contamination on the ground and during launch. This will be opened once it is in Earth orbit with the telescope pointing away from the Sun.

A sunshield keeps the instrument shaded, protecting the two instrument radiators that provide cooling to the detector and electronics. The sunshield also doubles as the structure carrying three solar panels, which are orientated in such a way as to provide sufficient power to operate the spacecraft in the planned pointing direction.

In order to improve pointing stability and minimise misalignment effects, the two spacecraft star trackers are mounted directly onto the instrument. The stability of the spacecraft pointing over time is further improved by feeding back information on the actual position of the target star that is being measured by the Cheops instrument to the spacecraft attitude and orbit control system – the platform system that controls the satellite pointing.

ESA is the mission architect, responsible for procurement and testing of the satellite. The prime contractor for the design and construction of the spacecraft is Airbus Defence and Space in Spain. A Consortium of 11 ESA Member States led by Switzerland provided essential elements of the mission. Of them, six countries were involved in building the instrument: the mechanical structure was built in Switzerland, the focal plane assembly in Germany, the baffle in Belgium, the optics in Italy, the data processing unit in Austria and the radiators in Hungary. ESA also contributed to the instrument development by procuring the focal plane detector (CCD).