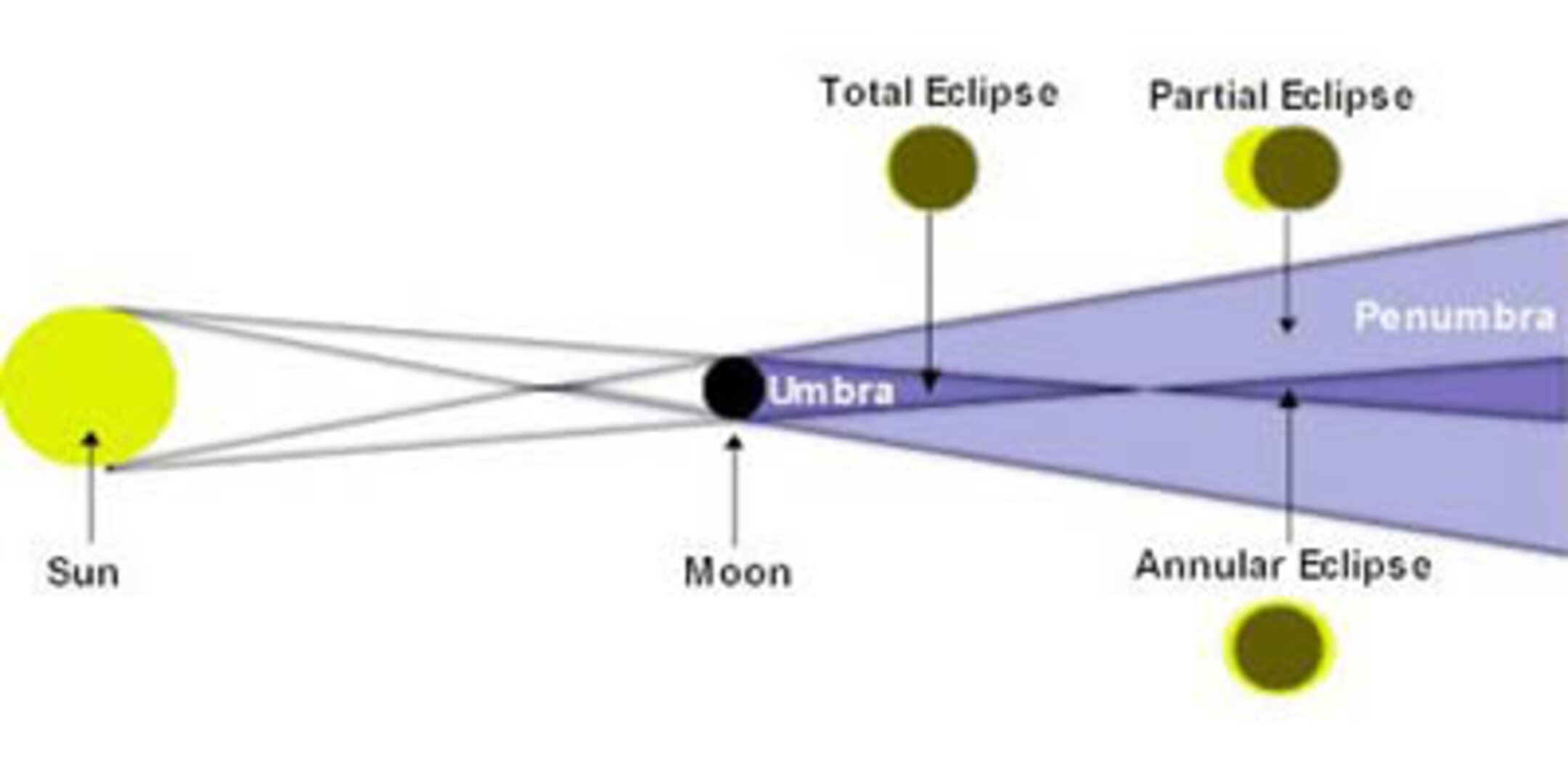 Solar eclipses
A solar eclipse occurs when the Moon comes between the Sun and the observer. This happens when the shadow cone of the Moon intersects the surface of the Earth, and is observable by anyone within this shadow zone.

Two conditions have to be met for a solar eclipse to occur. The first concerns the relationship between the orbits of Earth and the Moon, which are not in the same plane, but are inclined at around 5 degrees (5 degrees 8' 43") to each other. The Moon crosses the plane of Earth's orbit twice in each complete orbit. For an eclipse to occur the Moon must be near one of these intersection points (or nodes).

The second condition is that the Sun, Earth and the Moon must also be lined up, corresponding to the phase of the New Moon.

The Moon's shadow consists of two cone-shaped areas (see Figure 1), known as the umbra (externally tangent to the Sun and Moon) and the penumbra (internally tangent to the Sun and Moon). For an observer standing between the Moon and the umbra cone summit the eclipse is total. If the observer is beyond the cone summit, the eclipse is annular (ring-like): the apparent diameter of the Moon is too small to mask the whole solar disk. For an observer standing in the penumbra, only a part of the Sun is masked: the eclipse is partial.

The most favourable conditions for a total eclipse are when the Moon is at its perigee, Earth is farthest from the Sun (around July) and when the Sun is observed near zenith. When these conditions are all met, one can have a totality duration of more than seven minutes.

What is a lunar eclipse?

A lunar eclipse occurs when Earth comes between the Sun and the Moon. This phenomenon can be seen by any observer on Earth for whom the Moon is above the horizon, and so is much more frequent. Lunar eclipses occur at the time of a Full Moon, and when the Moon is near one of the nodes of intersection between its orbit and the ecliptic plane.

In practice, the lunar eclipse conditions are modified due to the refraction of the Sun's rays by Earth's atmosphere. This refraction (of 35 minutes of arc) allows some light to penetrate the cone of geometric umbra. So even during total lunar eclipse, the lunar disk is not completely dark. This grazing light is more absorbed by Earth's atmosphere in the blue and yellow portions of the spectrum, giving a particular reddish light during total lunar eclipse.