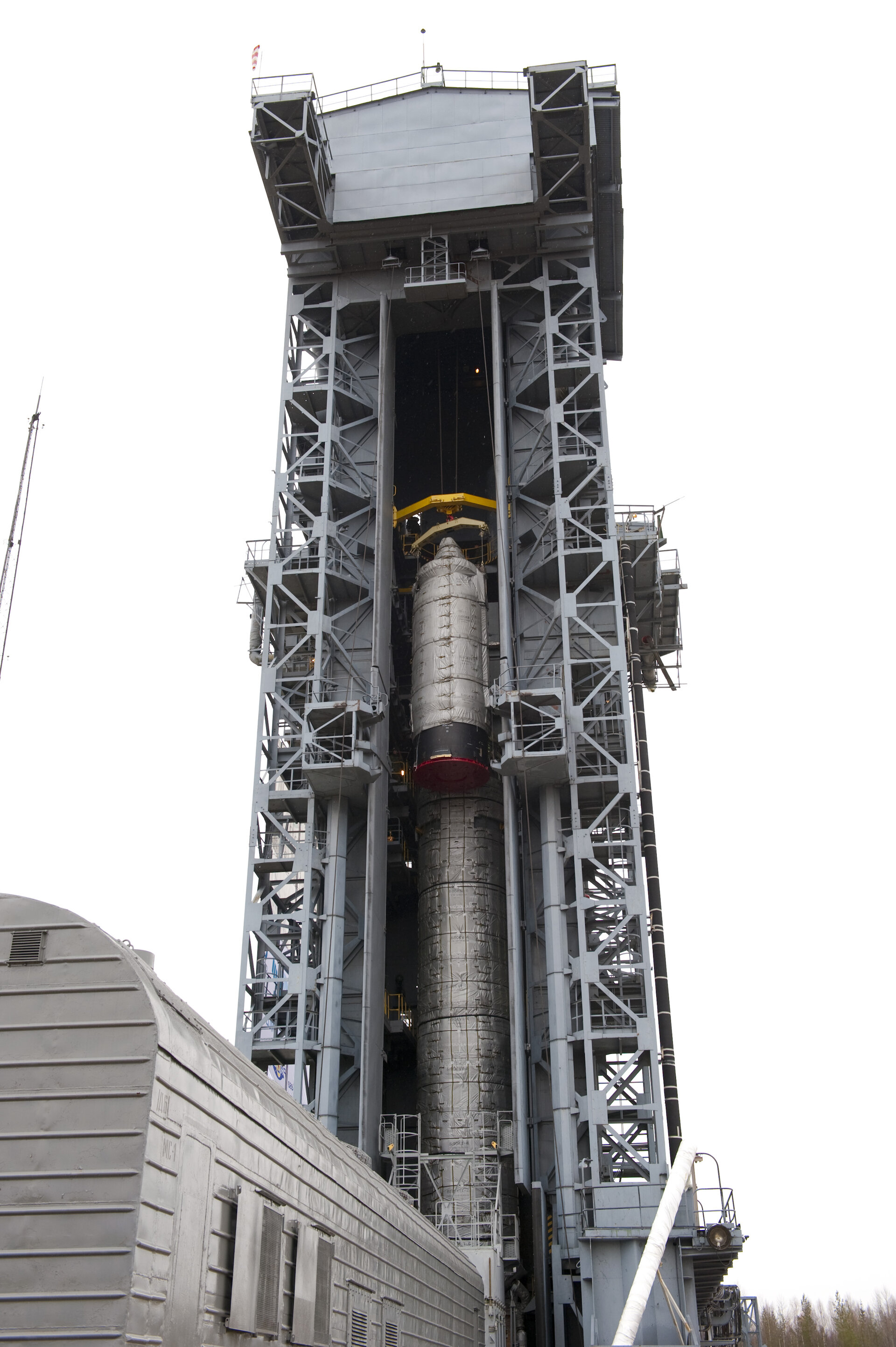 In readiness for launch on ESA’s SMOS and Proba-2 satellites – encapsulated in the launcher fairing – have been transported from the cleanroom and installed in the launch tower at the Plesetsk Cosmodrome in northern Russia.

This morning, the ‘upper composite’ of satellites joined to the Breeze-KM upper stage and sealed within the fairing was transported by rail from the cleanroom in the integration facilities to the launch pad. It took around four hours for the train to make the 5 km journey.

Protected by a thermal cover, the upper composite arrived safely at the pad. With snow now falling, winter has already arrived in Plesetsk. The next step hoisted the upper composite to the top of the service tower and onto the lower stages of the Rockot launcher.

Achim Hahne, ESA’s Project Manager for SMOS, said, “My whole team has been working very hard, hand in hand with industry, to get to this point and I thank everyone, both here in Plesetsk and in western Europe. I have just arrived in Plesetsk, so I am very happy to be here and share in this milestone moment with the launch team.”

Karsten Stauch, ESA’s Proba-2 Project Manager, who is also in Plesetsk at the moment, added, “We are very excited that we have reached another milestone in the Proba-2 launch campaign today with the rollout of the upper composite to the launch pad.”

The SMOS and Proba-2 satellites have been undergoing preparations for launch since September, including a range of mechanical and electrical tests, mating to the Breeze-KM upper stage and encapsulation in the fairing. Now the satellites are safely in the launch tower, the next step is to rehearse all the operations and communications procedures for the day of launch.

The Russian State Commission should give the green light to fuel the rocket on Friday 30 October for launch at 02:50 CET (01:50 UT) on 2 November.

ESA’s Earth Explorer SMOS satellite will make global observations of soil moisture and ocean salinity. The data will result in a better understanding of the water cycle and, in particular, the exchange processes between Earth’s surfaces and the atmosphere.

Launching with SMOS, Proba-2 is the second in ESA’s Project for Onboard Autonomy series. Although it is less than a cubic metre, it incorporates a total of 17 technology developments and four scientific experiments that focus on solar and space weather.