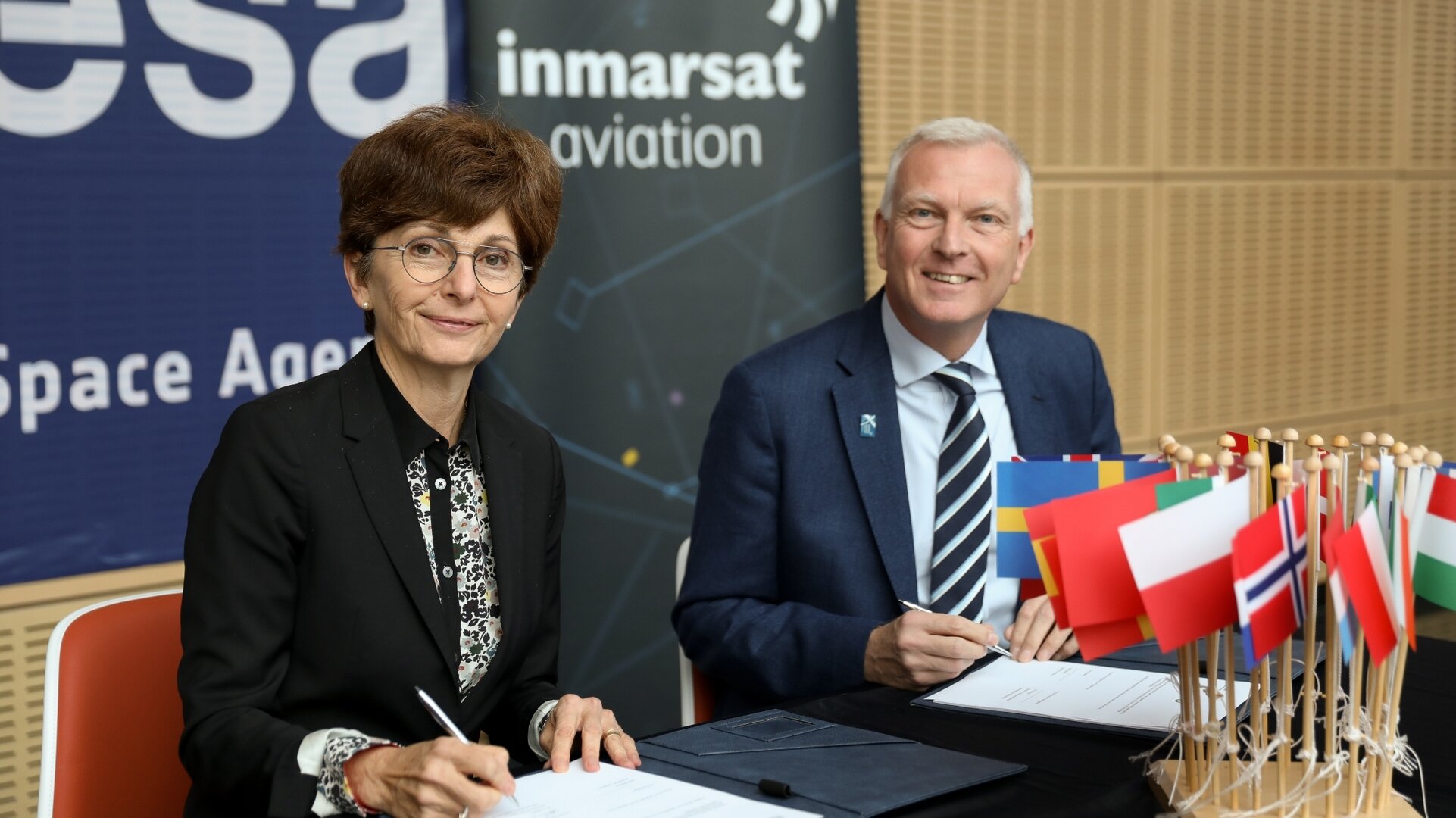 Air travel is set to become safer, swifter and more environmentally friendly thanks to the introduction of space-based technologies.

ESA has just signed a deal with Inmarsat, a global satellite communications company, to put satellite-based data communication links terminals on up to 20 aircraft flying commercial services across continental Europe.

The Iris terminals are designed to help pilots and air traffic controllers to use the shortest and fastest routes, boosting productivity, saving fuel and reducing environmental pollution.

The VHF radio channels that pilots currently use are already congested. With the number of flights projected to nearly double to 7.2 billion by 2035, these channels are expected to reach capacity limits for voice and data links in less than a decade.

The Iris system will help to relieve pressure on these terrestrial channels by supplementing them with a much larger pipe for digital information relayed via satellites. The system enables European air traffic managers accelerate the transition from a largely voice-based to digital-based exchanges.

Satellite communication systems such as Iris are among the essential enablers supporting the next generation air traffic management in Europe, in line with the Single European Sky Air Traffic Management Research (SESAR) programme, under the leadership of the European Commission.

Iris permits flight plans to be continually updated during the flight to maintain an optimal trajectory towards the destination. This allows air traffic controllers to schedule landings well in advance, maximising airspace and airport capacity, while minimising the fuel burned and the carbon dioxide emitted.

Satellites provide safe, secure, reliable and resilient connectivity, thanks to their high capacity and high availability in situations where security and service availability are paramount.

Iris data-link connection is protected by advanced firewalls and by the segregation of systems that adhere to the latest software security standards. This protects the integrity of the data by keeping each system functioning independently.

Satellites have been used to track aircraft over oceans and remote areas for decades. The technology has now been upgraded and is poised for deployment to serve continental airspace, starting with Europe and extending globally.

To deliver Iris, ESA is working with Inmarsat and a consortium of air navigation service providers, avionics manufacturers and ground segment providers, in full coordination and cooperation with the SESAR programme for its validation.

John Broughton, Vice President, Operational and Safety Services at Inmarsat Aviation, said: “We are very excited to embark on the next phase of Iris with all of our partners. Important progress has already been made on various critical elements and, as a result of strong industry-wide interest, several important agreements have been signed with major European air navigation service providers, aircraft manufacturers and airlines.

“Today’s agreement brings us another step closer to delivering the Iris programme.”

Magali Vaissiere, Director of Telecommunications and Integrated Applications at ESA, said: “Flying this technology for six months on some 20 aircraft brings years of research and preparation closer to fruition. We are a step closer to making real the highly anticipated idea of a modern air traffic management system over Europe.

“We look forward to seeing the results of the commercial flight demonstrations, and the environmental and operational benefits that Iris will bring to Europe’s congested airspace.”