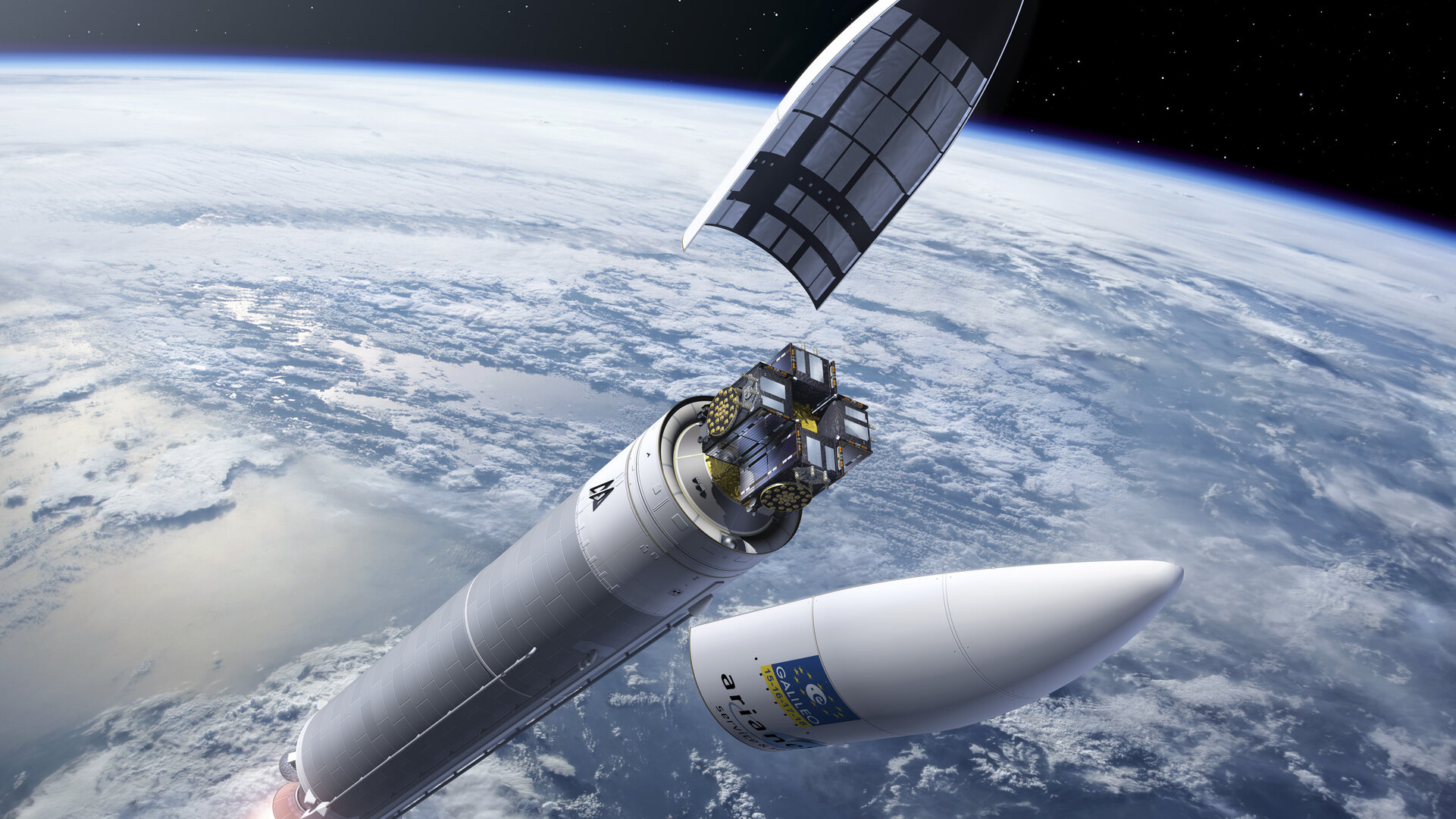 This month, a single Ariane 5 rocket is set to propel four Galileo satellites into orbit for the navigation constellation’s first-ever quadruple launch. Mission controllers are training intensively for the complex space delivery.

On 17 November, an Ariane 5 will use a new payload dispenser to release four identical satellites into orbit in one go.

This will be the eighth Galileo launch, and will bring the number of satellites in space to 18. Once complete, the system will sport 24 operational satellites and a ground network to provide positioning, navigation and timing services.

To date, Soyuz rockets have carried two satellites at a time. This quadruple launch presents several technical challenges, including the new dispenser and the need to establish control over four independent satellites almost simultaneously.

The ascent into the medium-altitude orbit will take three and a half hours. Then, after the satellites separate, a combined team from ESA and France’s CNES space agency will take over, establishing control and shepherding them through their early orbits, lasting nine days for one pair and 13 days for the other.

“At the time that the four satellites separate two by two, we’ll have two shifts of the mission team working in the control room at the CNES centre in Toulouse, France, each shift managing two satellites – so it will be an intense period,” says Liviu Stefanov, co-flight director from ESA.

“This is the same team who conducted the previous Galileo early orbit phases, so we’re familiar with the satellites themselves,” says Hélène Cottet, lead flight director from CNES.

“What’s different this time is managing four satellites, sometimes in sequence and sometimes in parallel. We have concentrated a lot of effort on planning and training for the first few hours in space.”

Since 2011, the joint team have conducted the Galileo initial flight operations alternately from ESA’s centre in Darmstadt, Germany, and the CNES centre in Toulouse.

Separation will mark the start of a set of critical activities and manoeuvres to ensure the four are ready for handover to the Galileo Control Centre in Oberpfaffenhofen, Germany for the rest of their mission.

This includes ensuring that each have opened their solar wings and are ‘power positive’, establishing a data link via a set of ground stations, conducting extensive health checks and then switching the craft into a stable Earth-pointing mode, ready for subsequent manoeuvres.

Each must make three engine firings at roughly one-day intervals to get onto their ‘drift’ orbits, after which control will be passed from the joint team to the Galileo Control Centre.

“After a few days, we expect things to settle down, and we’ll be able to concentrate on manoeuvring two satellites while babysitting the other two,” says ESA’s Tom Cowell, one of four spacecraft operations managers.

“After handover of the first pair to Oberpfaffenhofen, we can manoeuvre the other two just as we’ve done for previous dual launches.”

Even after handover, specialists will continue determining the orbits and computing manoeuvres to position the satellites in their final orbits at around 23 200 km, expected early in 2017.

Since summer, everyone involved in this Galileo launch has worked through multiple simulations, mostly focused on preparing for if things go wrong.

This week, the training will end with an intensive three-day live simulation in Toulouse.

After a network countdown practice on 14 November, the live network countdown for the actual launch will start a couple of hours after midnight on 17 November, with lift off from the European Spaceport in Kourou, French Guiana, set for the same day at 13:06 GMT (14:06 CET).

“It will be a challenge, but having already taken 14 Galileo satellites into orbit, our joint teams are confident of our abilities and skills,” says Hervé Côme, co-flight director from ESA.

“We know we can rely on teamwork and expertise, and we’re looking forward to a smooth lift off for Galileo’s first quad launch.”