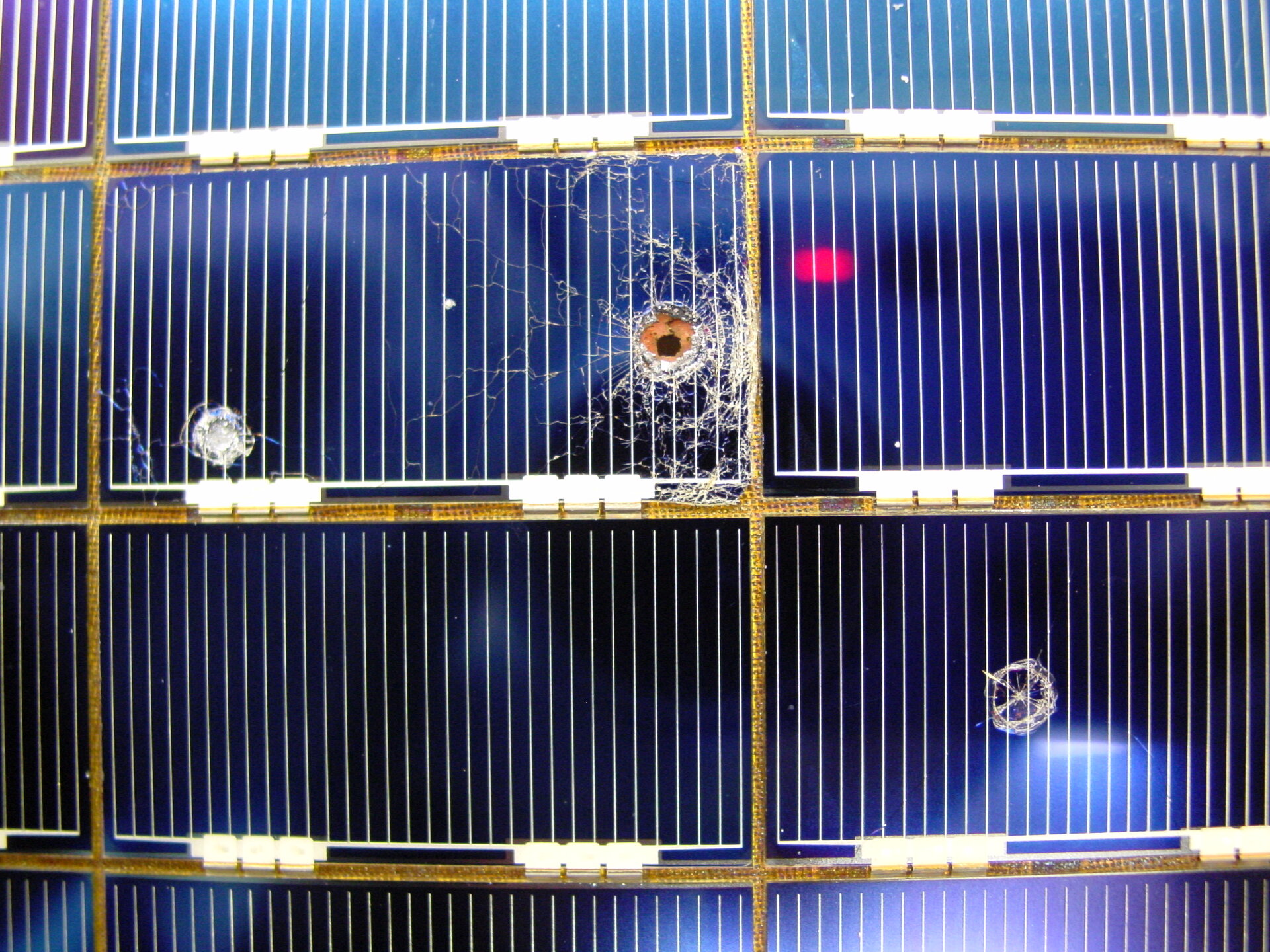 Solar cells are made from the same kind of semiconductor materials as integrated circuits. Trace impurities are added to a semiconductor to alter its electrical properties – a process known as 'doping'. Differing doping ingredients are used on either side of a semiconductor junction to create an electrical potential. Incoming sunlight generates an electric current which then flows across the junction.

Silicon was once the semiconductor of choice but it is increasingly supplanted by gallium arsenide (GaAs) –based semiconductors which reach higher power levels.

These allow the placing of multiple junctions on top of one another, each tuned to different segments of the overall light spectrum. Forming a single overall structure, these layers are stacked in series based on their sensitivity: the topmost junction reacts to highest-energy blue light while letting other light through; the middle layer absorbs medium-energy green light then the bottom layer makes its contribution from the remaining lowest-energy red light.

The resulting leap in efficiency from single to triple junction cells is on the order of ten percentage points, although designing and building them is hard. "In practice each triple-junction solar cell has about 30 individual film layers," says Mr Gerlach. "They are all needed to monolithically integrate the three power-generating junctions and to ensure that the maximum amount of light enters the solar cell and is not reflected at the surface. And each of these layers needs to be closely aligned to achieve an optimal cell."

Designing the connections between cell junctions therefore requires a great deal of expertise and innovation, he adds: "All layers must be matched regarding the current flowing through the cells to avoid efficiency losses, even though the junctions have different current density capabilities, and which change over time because space radiation degrades the individual junctions at a different rate.

"The trick is to find the right combination of materials and doping levels to ensure all junctions are perfectly matched at the end of the satellite's life. Through such design strategies, current solar cells on geostationary satellites still retain 88% of their original performance after 15 years resulting in an absolute end-of-life efficiency of 24.6%."

To minimise the harmful effects of space radiation – mainly energetic electrons and protons – all solar cells are covered by cover glass, typically just 100 micrometres (0.1 mm) thick. If a bare cell was exposed to the space environment it would degrade as much within a few days as a protected cell does in 15 years. All GaAs-based multi-junction cells are also vulnerable to so-called 'reverse voltage bias' – when part of the array is covered by shadow, as might occur during a manoeuvre or a particular orbital season then electric surges can damage the array. To guard against this, by-pass diodes need to be integrated into the solar cell.

Novel solar cells to give satellites a new lease of life

For handling and process reasons, standard triple-junction solar cells are grown on a 140 micrometre (0.14 mm) thick germanium (Ge) foundation material or 'substrate'. To generate power this thickness is not needed, and since Ge is a rare expensive material – amounting to around 30% of cell cost – research teams are working on a technique to remove and recyle this substrate. The result would be a 20-micrometre thin-film solar cell with an efficiency equivalent to a standard 'thick' cell.

"This would cut costs but more importantly reduce solar cell mass by something of the order of a kilogram per square metre," explains Mr Gerlach. "Some of the really big bird telecommunication satellites have arrays of 100 square metres or more so this would be a really significant mass saving."

Space missions would also gain increased power and performance without having to go through the extensive and expensive process testing of a new design with solar arrays having to be qualified for space.

Alternatively, if greater solar cell efficiency can be reached then smaller arrays could be flown, which would increase the satellite's working lifetime. Decreasing its surface area reduces the amount of attitude control manoeuvres required to compensate for the perturbing effects of solar radiation pressure.

Most solar cell experts agree that in practical terms the technological limit of the current concept has almost been reached, and efficiencies higher than 30% are unlikely. New ideas are therefore being considered to enable future efficiency improvements: