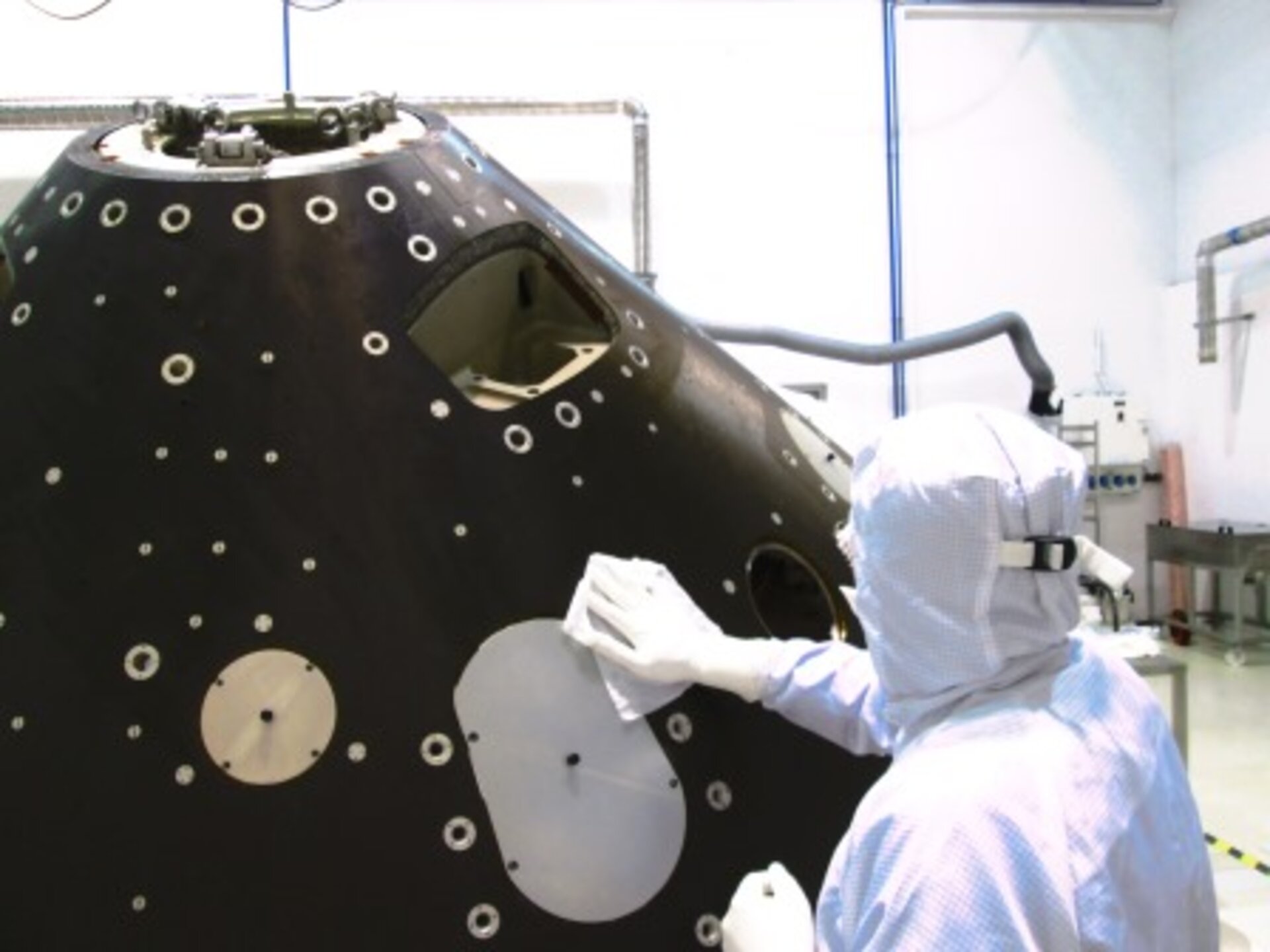 While astronauts might dream of discovering unknown life one day in their future career, ESA’s Planetary Protection Officer oversees activities that achieve it on a regular basis.

As part of the Agency’s efforts to prevent microbial lifeforms hitching a ride on missions to other planets and moons in our Solar System, teams regularly scour cleanrooms and launch facilities, on the hunt for any microbial inhabitants.

The sites used to prepare certain types of space hardware are among the cleanest places on Earth, cleaner than a standard hospital operating theatre thanks to filtered air, application of rigorous cleanliness procedures and workers who – as they enter through air-showers into the bioburden-controlled cleanrooms – remain fully shrouded within ‘bunny suits’.

“We have a long-term programme at ESA – and also NASA – to regularly monitor and evaluate biological contamination in cleanrooms and on certain type of spacecraft,” explains Gerhard Kminek, ESA’s Planetary Protection Officer.

“That includes launch facilities at Kourou in French Guiana and Baikonur in Kazakhstan, and cleanrooms at ESA’s ESTEC technical centre in the Netherlands and of our industrial partners.

“The work is done under ESA contract by the Astrobiology Research Group of the DLR German Aerospace Center, with participation from the Institute for Microbiology at the University of Regensburg, and the German Collection of Microorganisms and Cell Cultures (DSMZ).

“The aim is to quantify the amount of biological contamination, to determine its diversity – finding out what is there using gene sequence analysis, and to provide long-term cold storage of selected samples.”

Samples are acquired in various ways: air samplers collect a certain amount of air on a filter, while wipes dampened with ultra-pure water are run across space hardware or cleanroom surfaces. Swabs are used to sample smaller items such as payloads or electronics.

To quantify the biological contamination, the samples are then filtered onto culture plates and incubated for between seven hours and three days depending on the specific method used, to see how much turns up. Statistical analysis is used to assess the overall cleanroom or flight hardware ‘bioburden’, and check whether it falls within the required standard or if further measures are needed to reduce it.

Any lifeform hardy enough to endure the hostile, largely nutrient-free cleanroom environment is potentially interesting to science in its own right, so further investigation is actively encouraged.

“We end up with hundreds of ‘isolates’ but we simply cannot scientifically investigate them to a comprehensive enough level,” adds Gerhard. “So we do the critical ones and leave the rest to the scientific community. We have a website and every scientist who is interested can look at it and order some of these isolates to investigate them in more detail.”

Last November this effort made the headlines after a paper was published in the International Journal of Systematic and Evolutionary Microbiology.

It concerned a new type of bacteria first found in NASA’s Kennedy Space Center Payload Hazardous Servicing Facility as the Mars Phoenix Lander was prepared for launch in 2007 and later at the Kourou Space Centre Final Assembly Building during the  Herschel and Planck observatories launch campaign in 2009.

Dubbed Tersicoccus phoenicis, the bacterium turned out to be very different from existing species, not just a new species but actually a new genus – the next taxonomic category up – and so far isolated solely in cleanrooms.

On the Agency side, the main operational interest is knowing how much bioburden there is, rather than identifying its component microbes.

“But every couple of years or at critical events we need to check whether our bioburden reduction and control procedures are still good enough,” Gerhard explains.

“If, for instance, we turned up a certain biological contamination that is very resistant to heat, we might end up reviewing our cleanroom control procedures or the heat sterilisation process, potentially increasing the time and temperatures of application.”

Despite all the precautions taken, some microbes will always make it in, along with human beings, the air and the hardware itself transitioning in from the outside environment representing the main ‘contamination vectors’.

But the bioburden reduction achieved is quite striking, Gerhard says: ‘For a typical spacecraft assembled under bioburden controlled conditions, the biological contamination is about 10 000 times lower compared to a regular flight hardware manufacturing environment and shows a drastically reduced biological diversity. Some critical elements on certain spacecraft are even cleaner and for all practical purpose sterile.”

Microbial surveys are only one element of ESA’s multi-faceted Planetary Protection effort, which increased a decade ago as the Agency turned its attention of interplanetary missions to possible abodes of alien life.

“In principle we deal with all missions leaving Earth orbit – or coming back,” says Gerhard.

Limits are set for both biological contamination and the impact probability on a planet or moon for all planetary landers, and orbiters and spacecraft performing gravity-assist manoeuvres.

“In some cases we also perform an analysis of the spacecraft’s response to atmospheric heating during any end-of-life entry event, to see if this process can be used to reduce its biological contamination.”

Evaluating impact probabilities – in plain words, the likelihood of crashing – involves evaluating the mission’s operational reliability, flight hardware reliability and effects of the natural space environment such as micrometeoroids or atmospheric variations.

If the resulting probability of impact ends up being unacceptably high, then various mission modifications to the flight path, operating rules, back-up hardware or additional shielding may need to be implemented.

The Planetary Protection Officer ensures requirements are followed by taking part in reviews, performing audits and inspections and by verification assays on the spacecraft during assembly and launch operations.

Such microbial hunts are the most visible element of planetary protection. For instance, NASA’s Mars Science Laboratory team had to perform on the order of 4500 samplings during the flight system assembly, testing and launch operations.

The expected number of samplings for ESA’s ExoMars missions are of the same order but due to a set of new procedures validated in a joint ESA–NASA effort over recent years, the downstream processing effort of these assays and the time until the results are available are substantially reduced.

However, controlling the biological contamination of spacecraft exploring the Solar System is only one element covered under the umbrella of planetary protection. Another element is to prevent inadvertent contamination of the terrestrial biosphere by spacecraft returning with samples from other planets or moons.

For an envisaged Mars Sample Return mission, ESA has already invested a substantial effort developing a suitable flight and ground containment system that would keep alien samples isolated as well as pristine for subsequent scientific analysis, including an assessment of their hazardous potential.

Every two years, ESA together with other space agencies and the scientific community meet at the international Committee on Space Research, COSPAR, to review existing regulations based on the latest scientific findings about the limits of life and the environmental conditions of planets and moons in our Solar System.

“Planetary Protection is not about green goals for space, which is one of the popular misconceptions,” Gerhard concludes.

“These regulations have been put in place by scientists about half a century ago, to prevent any trace of alien life – or its absence – being accidentally and irreversibly contaminated, jeopardising the chance of meaningful scientific work related to the origin and distribution of life, its precursors or remnants. In addition, the regulations ensure that Earth is protected from potential hazards posed by extraterrestrial matter carried by a spacecraft returning from an interplanetary mission.

“In that sense, Planetary Protection measures protect our investment in space science and exploration.

“ESAs commitment to Planetary Protection is also reflected in the Agenda 2015 knowledge theme of understanding the origin of life, and part of implementing clean, responsible and sustainable space activities.”