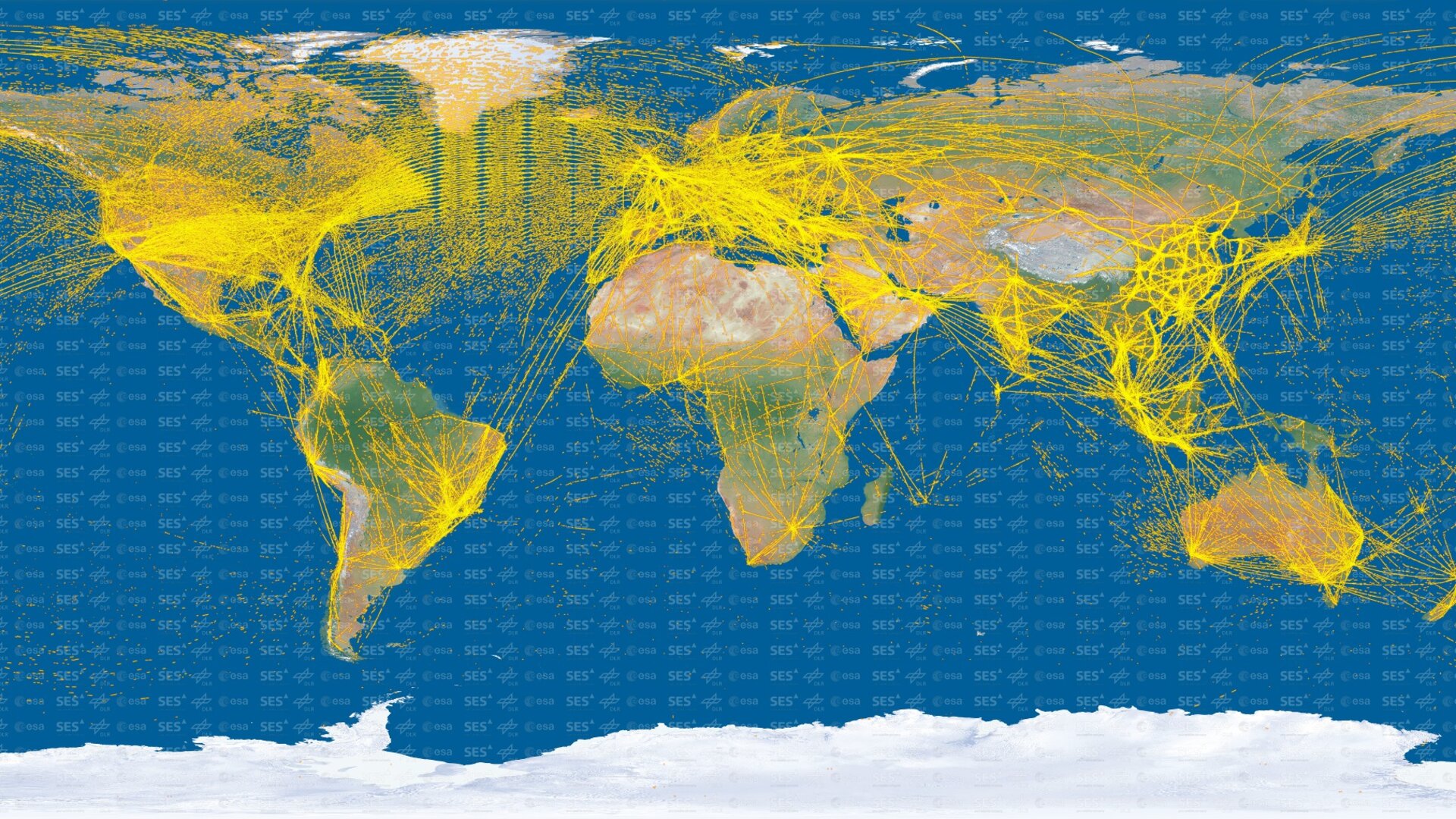 As ESA’s Proba-V works quietly on its main task of monitoring vegetation growth across Earth, the minisatellite is also picking up something from a little higher: signals from thousands of aircraft.

Launched two years ago today, Proba-V has picked up upwards of 25 million positions from more than 15 000 separate aircraft.

This is a technical world-first, demonstrating the feasibility of follow-on orbital constellations now being readied for operational aircraft monitoring.

“We’ve shown that detection of aircraft can work from space with no showstoppers, despite the fact that these signals were never designed to be picked up from so far away.

“In fact, the signals are beamed sideways from their host aircraft rather than omidirectionally, making them harder to detect from orbit.

“With a single satellite, our detection footprint is relatively small – about 1500 x 750 km – but for an operational service a constellation of satellites is envisaged to provide worldwide coverage.”

Smaller than a cubic metre, Proba-V is nonetheless carrying several technology experiments as well as its main wide-swath Vegetation camera, which tracks changes in plant growth across the entire planet every two days.

These signals are regularly broadcast from aircraft, giving flight information such as speed, position and altitude. All aircraft entering European airspace are envisaged to carry ADS-B in the coming years.

DLR contributed the receiver carried aboard Proba-V, while SES has provided the experiment's ground segment, encompassing the processing needed to decode the signals, including compensating for factors such as frequency-shifting caused by the motion of Proba-V relative to the aircraft.

“The focus of the experiment is on the large parts of the world without radar and less dense air traffic,” adds Toni.

“In the event, we have also had very good detections in the much more densely trafficked airspace of the US, Western Europe and Southeast Asia.”

In those parts of the world with radar coverage, air traffic controllers can shepherd aircraft very precisely, with separation distances down to 5.5–9 km.

However in the rest of the world, such as over the Atlantic, minimum separation distance goes up by a factor of 10, to 93 km.

DLR and SES are working with national air navigation service providers in Australia, Iceland, Portugal and Namibia to check Proba-V observations against the facts on the ground.

“We are still working to improve the system, with ongoing software upgrades, and investigating anomalies,” Toni adds. “Right now, some makes of aircraft are more easily detected than others, which typically comes down to the age and make of their ADS-B systems.”

An operational ADS-B detection system is being hosted on the IridumNEXT constellation, while SES is working with ESA to determine the market for a European version.

“If ADS-B from space is going to enter use on an operational, internationally certified basis, then we will certainly need a minimum of two systems,” Toni concludes.

“We couldn’t have a situation where the sole service suddenly goes down, and aircraft in the middle of the ocean need to spread out.”