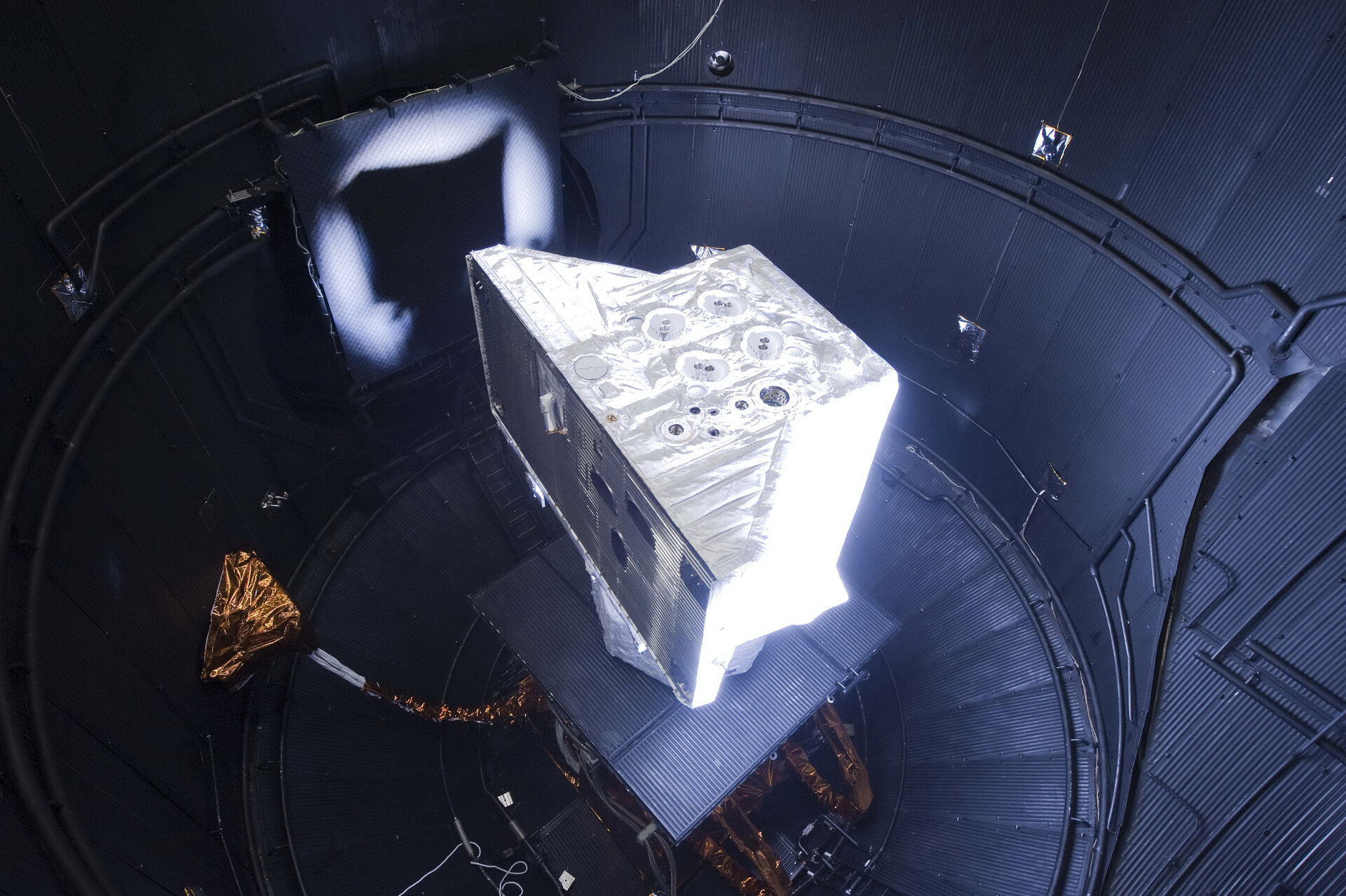 The Large Space Simulator is Europe's single largest vacuum chamber. It is a cylindrical container standing 15m high and 10m wide. The Simulator is used to test full-size spacecraft in representative space conditions.

The Simulator's high-performance pumps can achieve a vacuum a billion times lower than standard sea level atmosphere, while liquid nitrogen circulated around the Simulator approximates the cryogenic temperatures of space.

An array of powerful xenon lamps can reproduce the unfiltered sunlight encountered in Earth orbit, or turned up even higher to duplicate the energy intensity experienced closer to the Sun. Hardware can also be rotated in order to reproduce characteristic orbital motion as testing proceeds.

What kind of testing does it carry out?

The Large Space Simulator's close simulation of in-orbit environmental conditions allow a broad range of tests to be carried out in support of design optimisation and verification of spacecraft and payloads.

The Simulator is used for both thermal and mechanical testing. Thermal control designers work to define fixed temperature limits for space structures – if a satellite gets too hot or too cold then mission performance could be affected. Infrared thermography can be used to map hardware temperature patterns, with thermal tests in the Simulator can continue for weeks at a time to ensure that the test item stays within its forecast temperature range.

Extreme temperatures can also cause expansion or contraction of spacecraft materials, defined by their 'coefficient of thermal expansion'. This can cause disruption to the satellite platform and subsystems, and induce micro-vibrations and even stress fractures.

For mechanical testing, the deployment of complete large structures such as folded antennas or solar arrays can be performed in representative space conditions – vacuum and temperature extremes having the potential to interfere with such manoeuvres. 'Dynamic balancing' testing is also performed, where a satellite can be spun around its axis.

The Large Space Simulator has an overall volume of 2300 cubic metres. It consists of:

Since first becoming operational in 1986, the Large Space Simulator has proved to be a unique facility that has set new standards in space simulation techniques.

Its exceptional test volume makes it an excellent tool for testing large satellites and systems under conditions very close to those found in orbit. The Simulator has performed thermal and mechanical testing for many of ESA's largest missions including Envisat, XMM, ERA, Herschel and the Automated Transfer Vehicle (ATV).