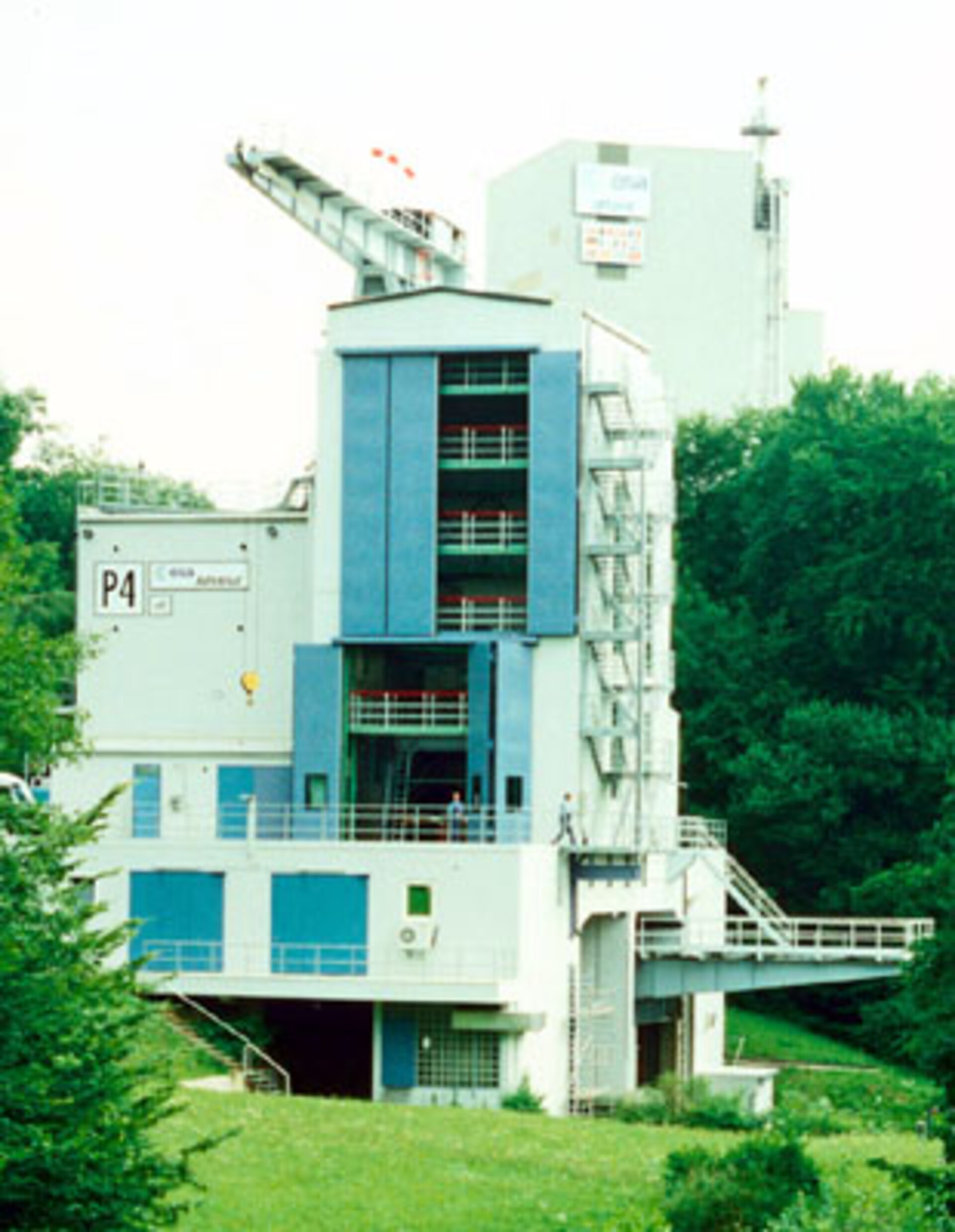 It is literally full steam ahead at the P4 rocket engine test stand at the German Aerospace Centre (DLR) in Lampolshausen, Germany. It is here that the upper stage engines of launchers and the engines used to place satellites and space probes into the correct orbit are tested.

These engines have to ignite in space, more than 120 km above the Earth, where the atmosphere is virtually non-existent. In order to test upper stage engines DLR have constructed special test stands to recreate, as near as possible, the conditions found in space. DLR has two test facilities: P4.1 and P4.2.

This was originally used for testing under sea level conditions and for testing the Ariane-4 liquid strap-on boosters. Now it is being transformed to test Vinci, the cryogenic upper-stage engine of the new Ariane 5 ESC-B launcher. Once in use this will be the most powerful of the Ariane launchers and will be capable of putting dual payloads of up to 12 tonnes into orbit.

In order to test the Vinci engine the P4.1 facilities have been enlarged to accommodate the systems needed to carry out cryogenic tests, these include a vacuum test cell for the new engine. The steam ejector system has also been enlarged to cope with testing this powerful engine.

The first Vinci engine tests are planned for the end of 2002. Once these are completed P4.1 will again be modified to accommodate the entire cryogenic upper stage of ESC-B, which is scheduled to come into operation at the end of 2005.

At the beginning of the year an extremely powerful pump and steam ejector system was installed and the facilities were upgraded. This is fortunate as the P4.2 test stand has been extremely busy in recent months testing and retesting the ignition of the Aestus engine which is used for the upper stage of the Ariane 5.

The Inquiry Board set up to examine why Ariane 5 flight 142 failed to put its satellites into the correct orbits, identified a combustion instability during the Aestus engine’s ignition as the cause of the failure.

Altogether more than 60 hot firing tests of the Ariane-5 storable-propellant Aestus engine have been carried out under vacuum conditions similar to those found in space. At the same time, the phenomena that occur during the critical ignition phase have been modelled and the data used to determine a new ‘softer’ ignition sequence to provide sufficient margins for all possible ignition modes.

According to Jacques Gigou, Chief of Ariane Operations and Installations, “the new ignition parameters will be tested and validated during November”. Once this is completed preparations will begin for the next Ariane 5 launch, scheduled for January 2002. This will be the first time that an Ariane 5 launcher places a satellite in sun-synchronous orbit. A historic event for more than one reason as the satellite in question is Envisat, ESA’s new Earth observation satellite.