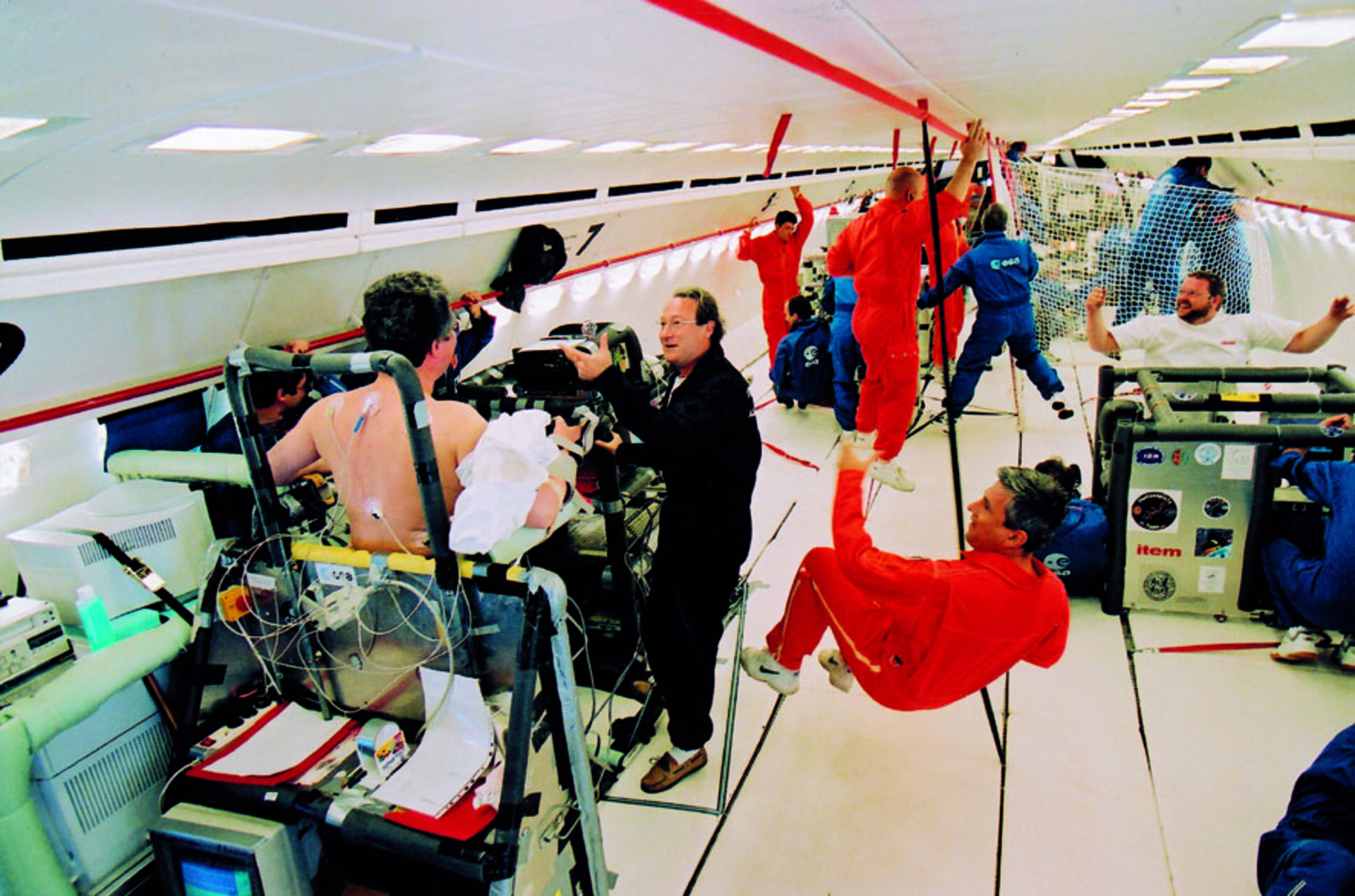 Fourteen European science teams have just concluded experimental sessions in a microgravity environment - without expensive trips to orbit or even rocket launches. They all took part in ESA's 30th Parabolic Flight Campaign at Bordeaux-Merignac Airport, and they flew their experiments aboard the special "Zero-G" Airbus A300 owned by Novespace.

The aircraft follows a precisely-calculated flight path that almost exactly matches the parabolic curve traced out by any object falling freely - a thrown stone, for example. While it is on that parabolic trajectory, the aircraft and everything inside it - in this case, people and their experiments - are weightless.

Since aeroplanes are not usually designed to behave like free-falling rocks, the whole procedure requires some very accurate flying. The pilots first bring the Airbus to near-maximum speed - more than 800 km/h - in level flight at 6,000 metres. Next, they haul the machine into a gut-churning 45-degree climb, and throttle back the engines to provide just enough power to match air resistance. Nudging the flight controls as required, the crew let their aircraft "fall" upwards for around 2,000 metres, over the top of the parabolic curve - with airspeed down to just 390 km/h - and down again to its starting altitude. Then they put full power back on and pull the machine abruptly from its dive back into level flight.

During the 20 seconds between climb and pull-out, its scientist-passengers - who may well include some trainee European astronauts; ESA's André Kuipers was on board during the May campaign - can check out their near-weightless experiments. In the course of a single Zero-G Airbus flight, they can expect to repeat the experience up to 30 times.

The mission can be very hard on stomachs, not so much from the weightless spells as from the fierce 1.8-g accelerations when the Airbus climbs into and pulls out of its parabola. (The equivalent NASA aircraft has the well-earned nickname "Vomit Comit".) But everyone on board considers the flight well worth risking the loss of a breakfast.

Those brief interludes of weightlessness are invaluable preludes for much more expensive trips into microgravity - perhaps aboard the International Space Station. Thanks to their trip aboard the Airbus, scientists can be confident that the effects they want to observe really occur, and that the apparatus they have designed will work properly.

The 14 experiments on this campaign - ESA's busiest ever - included eight in physical sciences and three in life sciences. There were also three student experiments that had already flown on the Zero-g Airbus: they were the most successful of 30 projects aboard the aircraft in last October's Student Parabolic Flight Campaign.

Among the professional experiments were an investigation into metallic foam formation and aluminium welding in microgravity, and a very practical test of heat exchangers designed for Refrigerator-Freezer racks on the ISS. The life science experiments included a test of bone-monitoring equipment that could also one day fly aboard the ISS, where long-term bone loss is a health problem for astronauts. You can find a full list of all 14 experiments here.

The next ESA Parabolic Flight Campaign is scheduled for October 2001. Most of the experiment slots on board are already filled, but there ís also a limited amount of room on the aircraft for media representatives interested in microgravity science. Journalists wishing to apply are invited to do so by sending an e-mail to contactesa@esa.int.