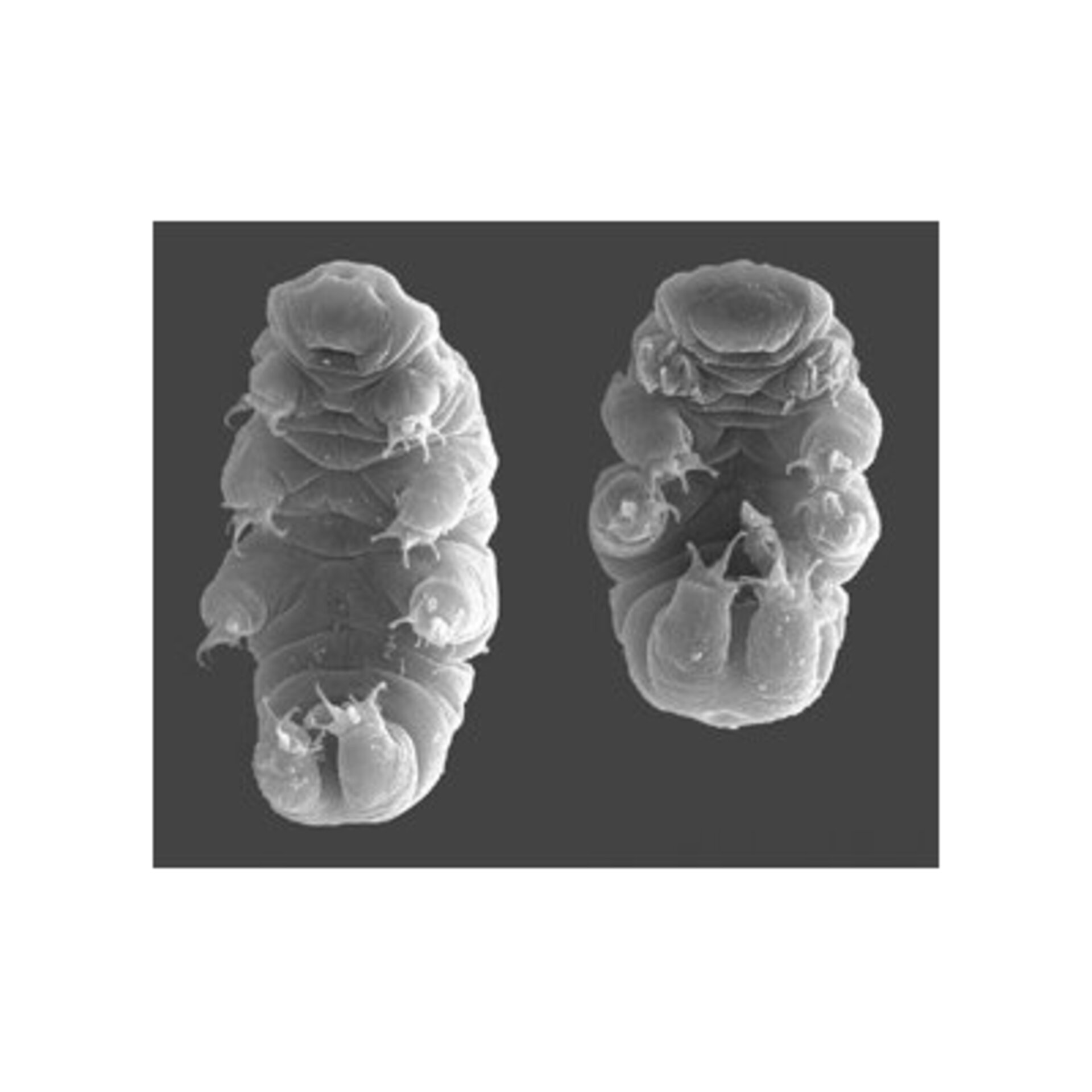 Scientists recently revealed that tiny creatures called water bears are the first animals to survive exposure to space. Sending water bears into space is one of several ESA experiments looking at organisms which can survive longer periods in open space.

Water bears, also known as tardigrades, are very small, segmented animals. The largest species is just over one millimetre in length. Water bears live in temporary ponds and droplets of water in soil and on moist plants. They are known to survive under conditions that would kill most organisms – they can withstand temperatures ranging from -272 deg C to +150 deg C, they can be without water for a period of 10 years, and they are extremely resistant to radiation.

Knowing them to be so hardy, the Swedish and German scientists behind the ‘Tardigrades in space’ (TARDIS) experiment wanted to find out how the water bears would fare in the harsh space environment. For 12 days in September 2007, some 3000 water bears hitched a ride into space on ESA’s orbital Foton-M3 mission.

“Our principle finding is that the space vacuum, which entails extreme dehydration and cosmic radiation, were not a problem for water bears,” says TARDIS project leader Ingemar Jönsson, from the University of Kristianstad in Sweden.

That the water bears survived, shows just how robust they are. The next step will be to understand what mechanism makes this possible. Jönsson: “How do their cells stabilise the membrane and DNA when they dry out for example?” Understanding these mechanisms can open the door to many insights both in space bioscience and in other areas.

The tardigrades join a fairly select group of organisms which are able to cope with the extreme conditions in space. Over the past 10 years, other ESA experiments have shown that lettuce seeds and lichen were also able to survive exposure to space. If shaded from direct sunlight, bacterial spores are also known to survive for many years under space conditions.

“The water bears are something new. Nobody knew about that capability” says René Demets, ESA project biologist. “The question is why are terrestrial organisms prepared to survive exposure to space conditions? Is there a rationale? Nobody knows at the moment.”

Survival in space is often linked to a much wider theory about how life originated here on Earth. “Perhaps the starting point for life was not even here on Earth,” says Demets. “Could life as we know it have started elsewhere, to be carried later for instance on a meteorite and delivered here on Earth? Favourable conditions meant that it could further propagate, develop, grow and live on. Now we have actually found some organisms that can survive under harsh space conditions.”

If these organisms were to travel on board a meteorite, they would also have to survive the entry through Earth’s atmosphere. ESA’s series of Stone experiments, also conducted on the Foton missions, show that in the upper layer of the meteorite, up to 2 cm depth, nothing could survive the atmospheric entry because of the high temperature and pressure. Only an organism that could live inside deeper cracks or pores in the rock could perhaps survive.

These space exposure experiments have so far been limited to one or two weeks in mission duration. ESA is now also testing longer duration exposure with an suite of experiments on the International Space Station called Expose. Several trays filled with terrestrial organisms are already installed on the outside of the European Columbus laboratory as one of the nine payloads of the European Technology Exposure Facility (EuTEF). Another Expose unit, scheduled for launch on a Russian Progress cargo carrier in November, will be attached to the Russian segment of the Space Station.

“After about one and a half years we will get the Expose trays back and see what the situation is after long duration exposure,” explains Martin Zell, Head of ESA's ISS Utilisation Department. “We could have a brilliant result with survival of the organisms as we have seen with the water bears, or we could have a quite negative result and know for sure that long-duration exposure will never work. With these experiments we are probing the alterations of organisms in space and their ultimate limits of survival.”