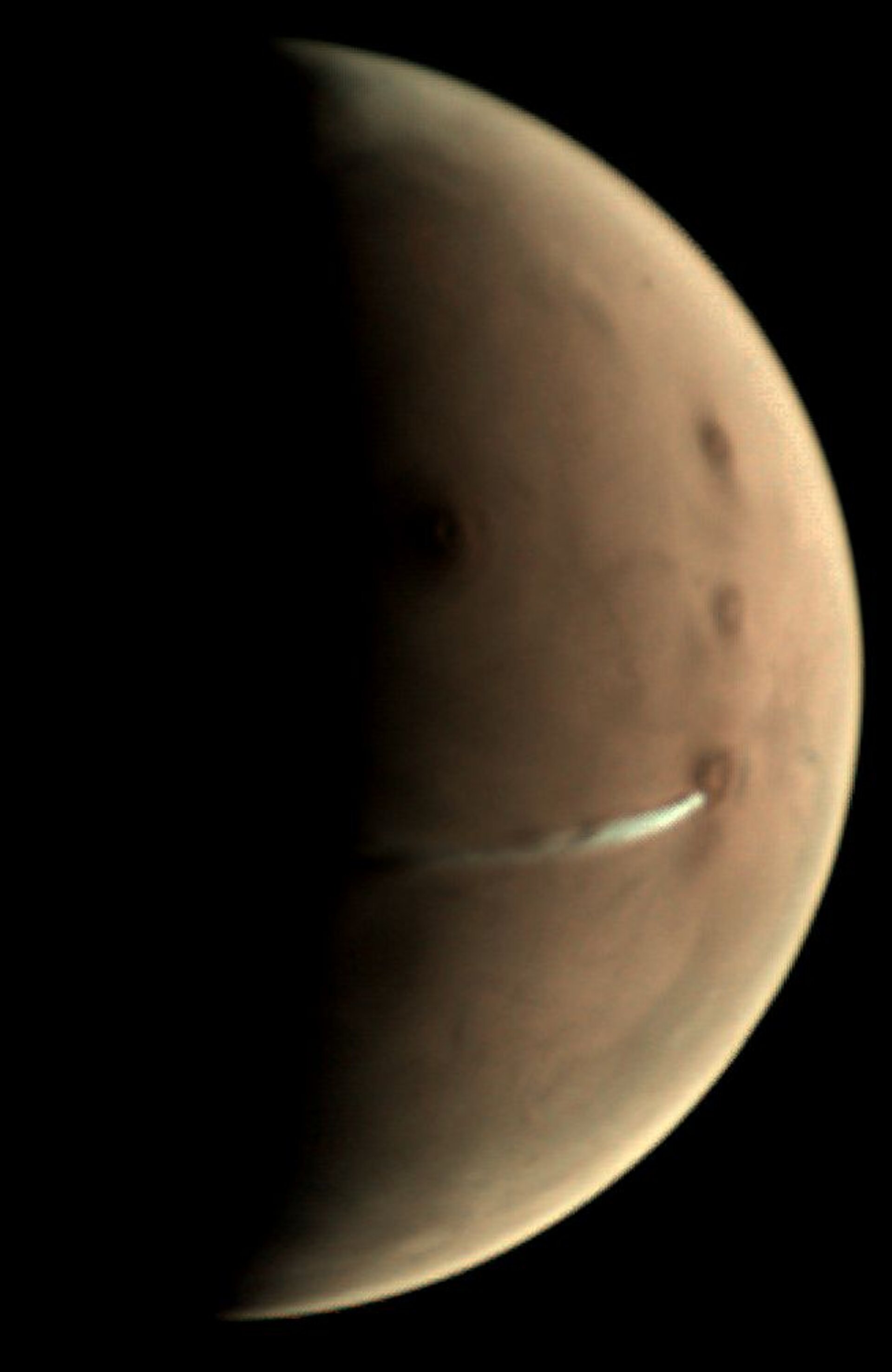 Since 13 September, ESA’s Mars Express has been observing the evolution of an elongated cloud formation hovering in the vicinity of the 20 km-high Arsia Mons volcano, close to the planet’s equator.

In spite of its location, this atmospheric feature is not linked to volcanic activity but is rather a water ice cloud driven by the influence of the volcano’s leeward slope on the air flow – something that scientists call an orographic or lee cloud – and a regular phenomenon in this region.

The cloud can be seen in this view taken on 10 October by the Visual Monitoring Camera (VMC) on Mars Express – which has imaged it hundreds of times over the past few weeks – as the white, elongated feature extending 1500 km westward of Arsia Mons. As a comparison, the cone-shaped volcano has a diameter of about 250 km; a view of the region with labels is provided here.

Mars just experienced its northern hemisphere winter solstice on 16 October. In the months leading up to the solstice, most cloud activity disappears over big volcanoes like Arsia Mons; its summit is covered with clouds throughout the rest of the martian year.

However, a seasonally recurrent water ice cloud, like the one shown in this image, is known to form along the southwest flank of this volcano – it was previously observed by Mars Express and other missions in 2009, 2012 and 2015.

The cloud’s appearance varies throughout the martian day, growing in length during local morning downwind of the volcano, almost parallel to the equator, and reaching such an impressive size that could make it visible even to telescopes on Earth.

The formation of water ice clouds is sensitive to the amount of dust present in the atmosphere. These images, obtained after the major dust storm that engulfed the entire planet in June and July, will provide important information on the effect of dust on the cloud development and on its variability throughout the year.

The elongated cloud hovering near Arsia Mons this year was also observed with the visible and near-infrared mapping spectrometer, OMEGA, and the High Resolution Stereo Camera (HRSC) on Mars Express, providing scientists with a variety of different data to study this phenomenon.

Follow the development of this cloud via the daily images sent by the VMC:
https://www.flickr.com/photos/esa_marswebcam/