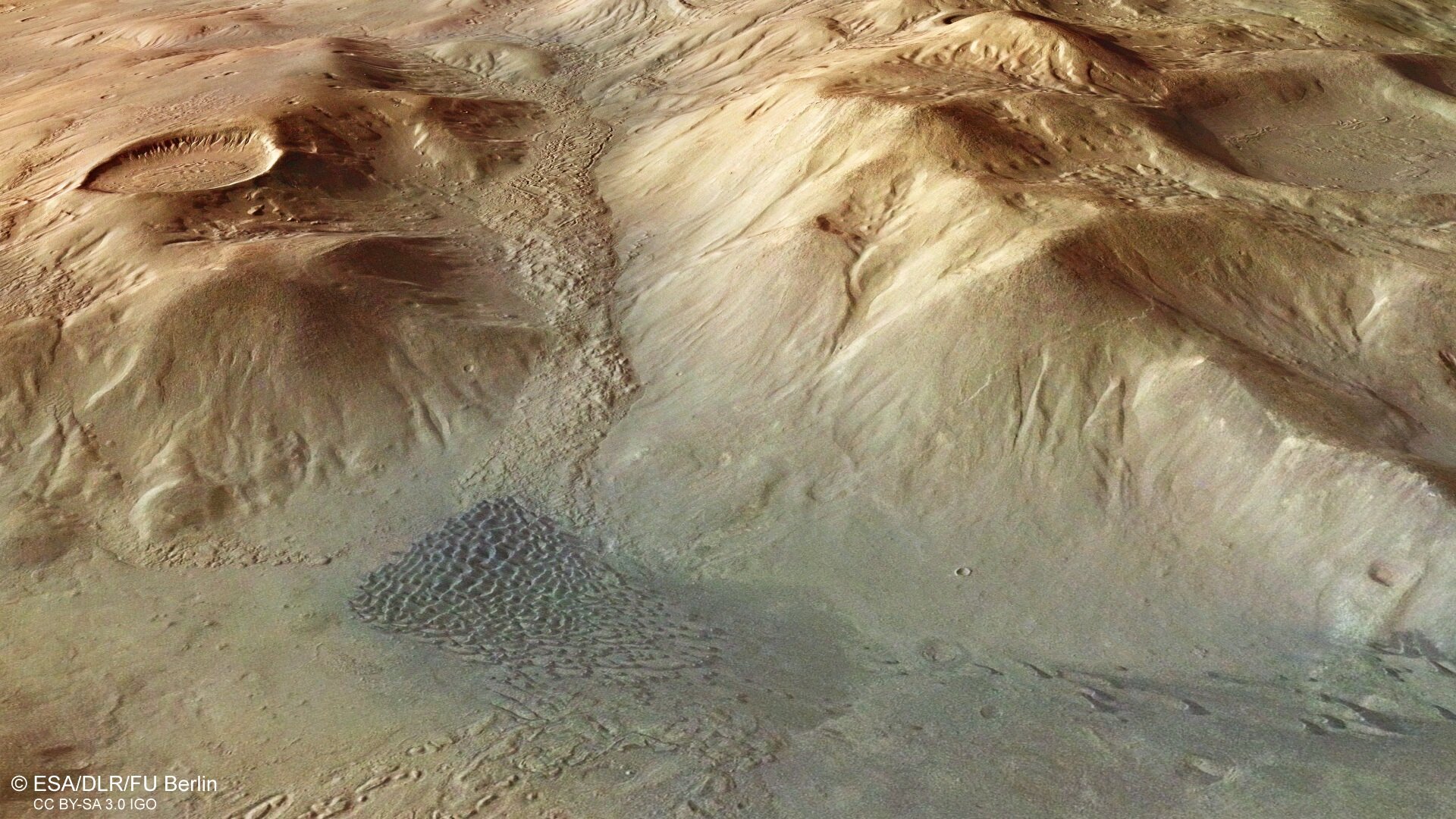 Newly processed images from ESA’s venerable Mars Express orbiter reveal detailed marks of geological processes that have shaped the Nereidum Mountain Range in the southern hemisphere of Mars over billions of years.

The true-colour images, captured by the High Resolution Stereo Camera (HRSC) in 2015, show the surface of the region north of the Argyre impact basin, one of the largest impact structures on Mars, with a resolution of 15 meters per pixel.

The Nereidum range stretches for more than 1 100 km and forms the northern rim of the Argyre impact basin. The range arose together with the basin when an asteroid or comet, some 50 kilometres in diameter, hit the region about 4 billion years ago.

In the true-colour image, one can see the branch-like structures of valleys carved into the slopes either by the melting snow and ice or runoff from rain in the early period of Mars’ evolution when the planet had abundant water resources.

Inside the craters in the image, one can see deposits, in some cases concentric, probably created by the sublimation of ice that used to cover the region in the past. Scientists believe water ice might still be present in the region deep under the surface.

Mass wasting deposits clearly visible in the canyons captured in this image are also a result of glacial processes that had taken place in the area in the past.

The dark brown streak on the left-hand side of the image represents dune fields created by the effects of wind as it transports sand grains over large distances on the surface of Mars. On the north-facing slope of the ridge between the northern part of the dune field and the large filled crater towards the south, one can clearly see recently created alcoves and gullies. These structures are often linked to the melting of ground ice and could also point to still existing water ice deposits in the subsurface.

The three-dimensional rendering shows a section of the image capturing the dune field and the two large craters and the canyon between them viewed from the west. The rendering was generated by the combination of data from the Mars digital terrain model (DTM), the nadir (downward-looking) channel and the colour channels of the HRSC instrument.

The stereoscopic image provides a three-dimensional experience when viewed using red-green or red-blue glasses. The image was derived from data acquired by the nadir channel and the stereo channels of the HRSC camera aboard Mars Express.

The color-coded topographic view is based on a digital terrain model (DTM) of the region, from which the topography of the landscape can be derived. The reference body for the HRSC-DTM is a Mars equipotential surface (Areoid).

This image shows the location of the imaged region with respect to the wider geography of the Argyre Impact Basin. Some 370 km to the southeast is the large Hooke crater. Sumgin crater is located to the north. The image, centered around 312° E, 5° S, was acquired during Mars Express orbit 14709.

The HRSC instrument was developed and is operated by the German Aerospace Center DLR and launched aboard ESA’s Mars Express mission in June 2003. It has been imaging the surface of Mars since late 2003.