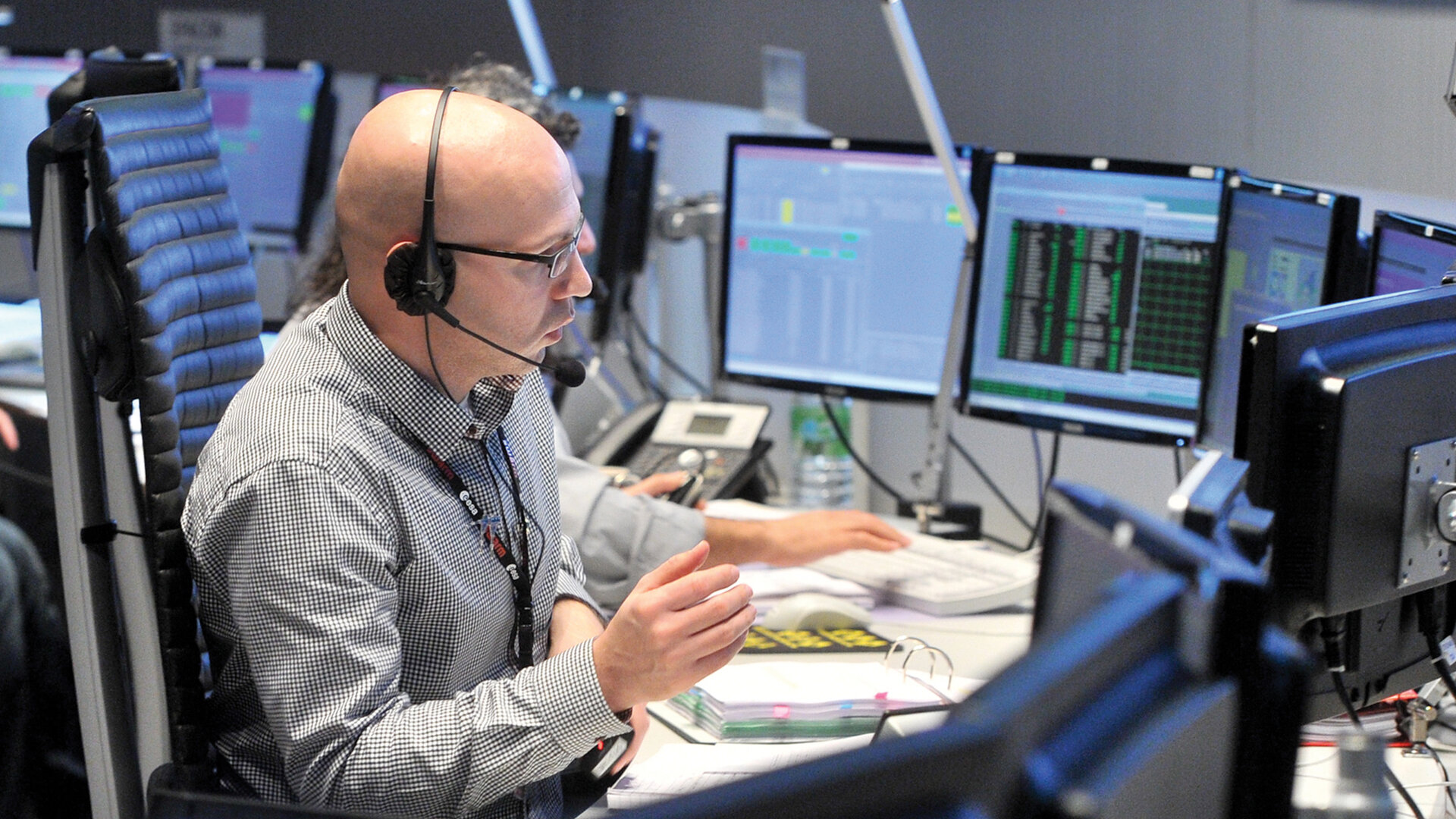 While the satellite is being built by industry, and subsequently integrated and tested at ESTEC, teams at ESOC begin building and configuring the ground segment systems, centred on the Mission Control System, and preparing teams for flight operations.

The Mission Data Systems (MDS) is a ‘system of systems’ comprising multiple sub-systems, including the Mission Control System (MCS), the flight dynamics system, a specially designed spacecraft simulator and the mission planning system.

These work together to enable engineers at ESOC to process satellite telemetry – information sent from the spacecraft reporting on its health and status – and prepare the telecommands that must be sent up to effect daily operations. These include commands instructing the satellite where it should point itself, when to turn its thrusters on or off, when on-board platform and payload systems should function, and when to download the mission’s precious scientific data.

A typical scientific satellite has over 20 000 control parameters (similar to the number required to control a modern jet aircraft) that control on-board systems, functions and settings. Each must be carefully configured to enable the satellite to perform its scientific investigations at each phase of the mission.

To ensure the success of what might be a billion-euro mission, the Mission Data Systems must provide high reliability, quick response, clarity of information and guaranteed availability of data – with all activities conducted in an unforgiving, real-time environment.

While the Mission Data Systems are the heart of the ground segment, many other teams, facilities and systems are needed to successfully carry out mission operations.

The ground tracking stations and communication networks have to be configured and tested for the specific needs of the mission, and any necessary additional capability or functionality must be developed, tested and integrated. Also, in its role at the Operations Control Centre (OCC), specialised control rooms, computer facilities and local area networks must be established at ESOC for the mission and these must be integrated with all other systems.

Finally, all systems together must be validated in a realistic, end-to-end (i.e. spacecraft-to-ground) testing campaign.

This is achieved through a series of System Validation Tests (SVT), which make use of the actual spacecraft while it is located on ground at the assembly and integration site. The actual satellite is connected remotely to ESOC via dedicated communication lines.

For each of ESA’s planetary, observatory and solar missions, the Science Operations Centre (SOC) is usually located at ESAC, ESA’s European Space Astronomy Centre, near Madrid, Spain. For the Agency’s Earth missions, the Payload Data Ground Segment (PDGS) is generally located at ESRIN, ESA’s Centre for Earth Observation, near Rome, Italy. Sometimes, these instrument control facilities are located at cooperating agencies or at research, academic or scientific institutes

During the pre-launch period, an experienced Spacecraft Operations Manager (SOM) is appointed to lead the Flight Control Team, and serve as the central figure responsible for leadership, technical management and mission operations success.

The team typically comprises from six to as many as fifteen experienced system engineers, analysts and other experts (depending on the complexity of the spacecraft and the mission) provided from within ESA or by industrial contractors. The team begins training, studying the spacecraft, its systems and its scientific goals, learning in immense detail how every step of the mission should proceed.

In space, teamwork is crucial to success. The stakes are high, missions can be valued in the billions of euro and the scientific data may be literally irreplaceable. The Spacecraft Operations Manager builds a team and assumes responsibility – and when problems happen, time is critical and solutions unobvious, it's the SOM and his or her team who take the lead.

Based on the operations concept and the scientific goals, the Flight Control Team develops a series of detailed flight control procedures and flight ‘rules’. These cover every aspect of the mission’s operations, and will serve as primary reference throughout the satellite’s life in space.

Engineers from the Flight Control Team meet with the Project Team from ESTEC and with the satellite manufacturer on numerous occasions as the mission progress through various stages of readiness. These include a series of technical reviews of the satellite, the ground segment and the flight teams’ preparations.

The costs for the lifetime operation of a satellite mission typically comprise no more than 8% of the overall mission budget (most of the budget is allocated to manufacturing and testing the satellite and procuring the launch).

Of the mission’s operations budget, the majority flows to European industry, which