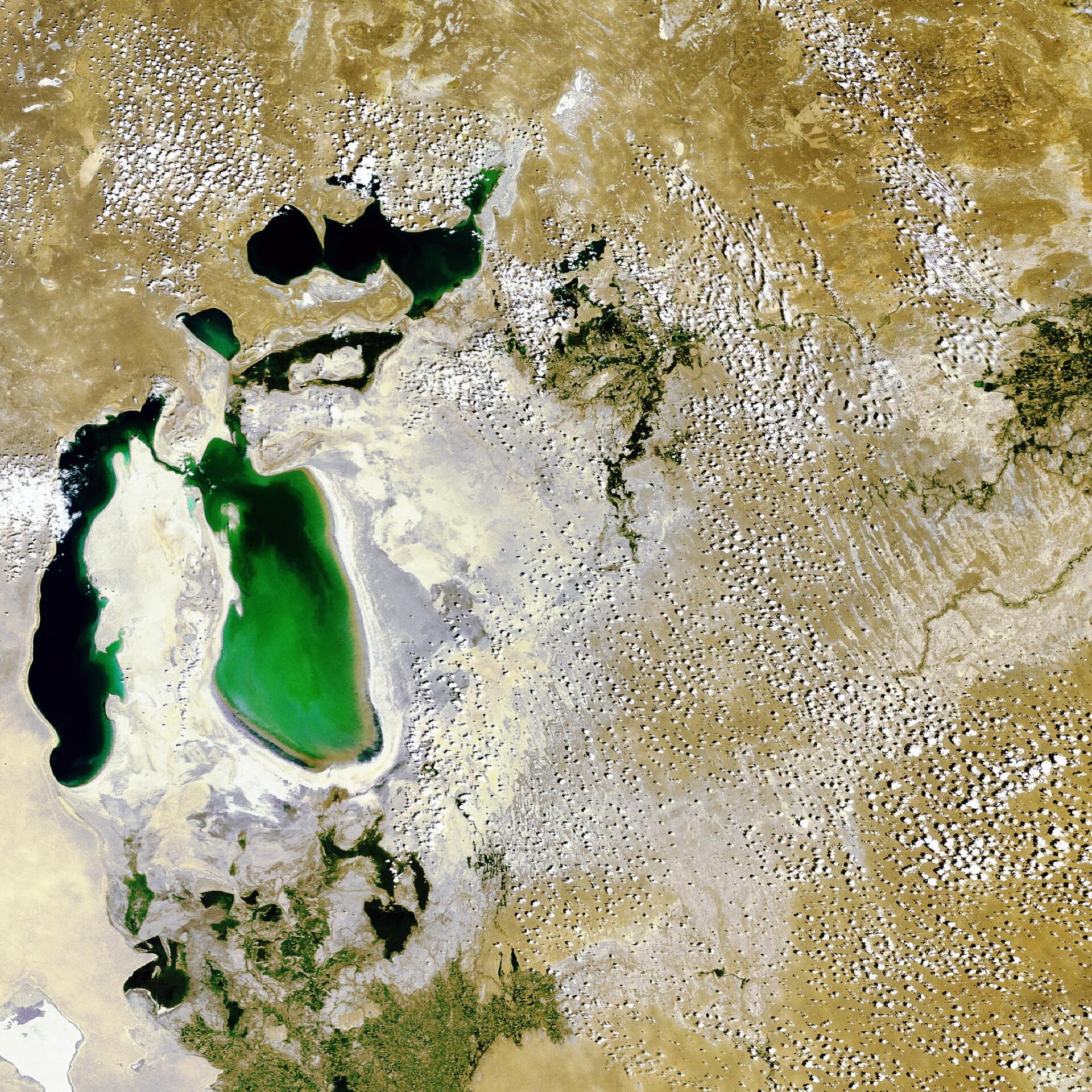 The Aral Sea in Central Asia is shown in this Envisat image. The Aral Sea, located on the border between Kazakhstan and Uzbekistan (to the south), is actually a lake rather than a sea. Over the last 40 years, the Aral Sea, once the fourth largest lake in the world, has evaporated to half its original surface area and a quarter its initial volume, leaving roughly a 36 000 square kilometre zone of dry white-coloured salt terrain now called the Aralkum Desert.

As its water level has dropped 13 metres since the 1960s, the Aral Sea has actually split into two – the larger horseshoe-shaped body of water and a smaller almost unconnected lake to its north. This Small Aral Sea is the focus of international preservation efforts, but the Large Aral Sea has been judged beyond saving (the shallowness of its eastern section is clear in the image). It is expected to dry out completely by 2020.

The Small Aral Sea is still thought to be saveable, and several dikes have been constructed to cut it off from the Large Aral Sea – preventing water loss and salt contamination - but shifting water levels have so far defeated these efforts. The channel connecting the two should soon dry up, preserving at least the Small Aral Sea. Meanwhile researchers are studying the salty Aralkum Desert to see how best to promote plant growth and stabilise the dusty dry lakebed.

Located about 200 kilometres east of the Aral Sea is the Baikonur Cosmodrome – the Russian-operated space launch facility located in the south-central part of Kazakhstan. Built in 1955, the Cosmodrome, which is still the world’s largest space launch facility, covers 6 717 square kilometres and extends 75 kilometres from north to south and 90 kilometres from east to west. The base contains dozens of launch pads, five tracking-control centres, nine tracking stations and a 1500-kilometre rocket test range.

Although the name of the launch facility is Baikonur, the Cosmodrome is not actually located there but near the town of Tyuratam. The former Soviet Union, which Kazakhstan was part of prior to gaining its independence in 1991, intentionally gave it the misleading name of Baikonur, which is a mining town located about 300 kilometres northeast of the space centre, to conceal the actual location of the site.

Envisat acquired this image on 14 July 2006 with its Medium Resolution Imaging Spectrometer (MERIS) instrument while working in Full Resolution Mode to provide a spatial resolution of 300 metres. The image has a width of 545 kilometres.