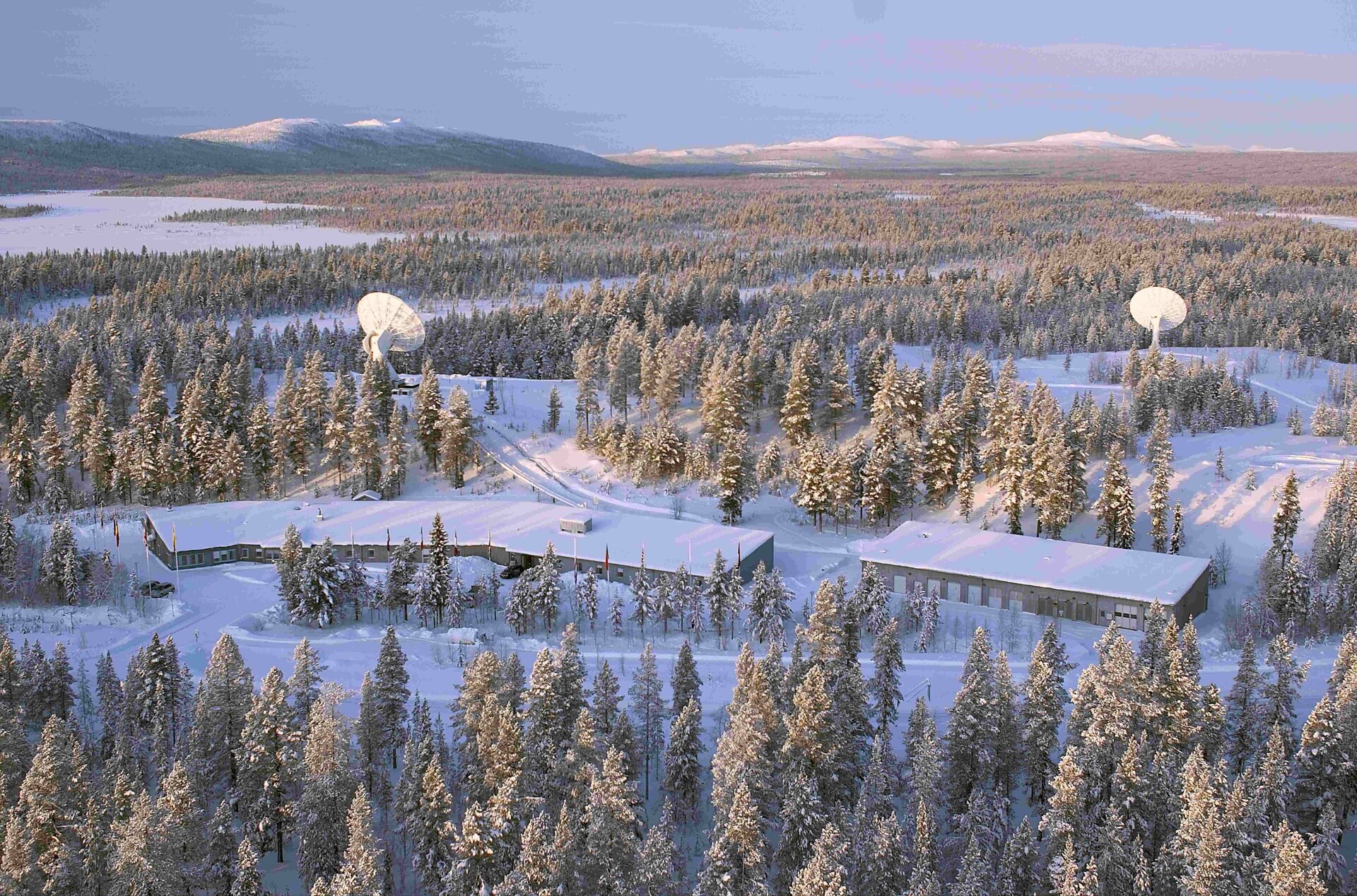 North of Sweden and the Arctic Circle, ESA’s Kiruna ground station is celebrating 30 years looking skyward, connecting us to many of our beloved and most pioneering space explorers.

The station, equipped with two dish antennas 15 m and 13 m in diameter, is a crucial space gateway, bringing data down to Earth that lets us study our planet's oceans, water and atmosphere, understand weather patterns and the rapid advance of climate change.

In 1986, ESA and Sweden agreed to establish satellite tracking facilities near the top of the world, in the region of Salmijärvi. Here, on a 20-hectare site some 38 kilometres east of Kiruna town and just 10km from the ESRANGE launch site, the Station was sited.

In September 1990, His Majesty The King of Sweden accompanied by ESA’s then Director General Reimar Lüst pressed the button that triggered the antennas first track, inaugurating the station and marking the start of its operational life.

Situated above the Arctic Circle at 67.9 deg latitude, Kiruna is the northernmost station in ESA's Estrack network, an optimal geographical location to track polar-orbiting satellites. As such, the station is mainly devoted to the support of Earth Observation missions, bringing home data from some of ESA’s renowned windows on the world.

In July 1991, the station began routine support to ESA's then-new ERS-1 mission, with an on-site staff of some 25 engineers. A few years later in 1994, the station's systems got their first upgrade, meaning the station could also support the follow-on ERS-2 mission, launched the following year. The two radar missions could then be operated on a tandem basis, marking a first for Europe.

In 2002, Kiruna took on communication responsibility for ESA's Envisat mission, the largest civilian Earth Observation satellite ever flown. As the 8-tonne satellite and its 10 onboard instruments would be producing large quantities of data it was again necessary to upgrade the station. A second, 13-metre dish antenna was installed to deliver high-data-rate capability in X-Band.

Kiruna's antennas and station systems are normally operated remotely from ESA's Network Operations Centre, located at the Agency’s mission control in Darmstadt, Germany. Here, operators are on duty 24 hours a day, all year round.

For maintenance and day-to-day troubleshooting on site, Kiruna relies on a local team of engineers. These specialists also work 'on console' if direct intervention is needed during critical spacecraft manoeuvres or launch activities.

Over the course of 30 years Kiruna station has established an enviable record providing reliable communication links with dozens of Europe's most important and renowned missions like the gravity-measuring GOCE.

From its remote polar location, Kiruna today supports a wide range of European missions including Integral, an orbiting gamma-ray telescope, and Cluster, a set of four identical satellites flying in a tetrahedral formation to gather data on the plasma environment between the Sun and Earth.

In a typical month, more than 700 hours of communication link-ups are made between Kiruna’s two terminals and passing satellites, up to 15 different spacecraft in all.

This means the station is working around the clock, providing tracking support for 23 hours and 20 minutes each day with an average service performance success of 99.8%. These communication ‘passes’ enable the station to download vital science data and upload fresh commands for the coming orbits.

Ever evolving, Kiruna eyes the future

Three decades have passed since Kiruna’s royal inauguration, and in that time the ground station has cemented itself as one of Europe’s most important space facilities both for ESA and its partner agencies.

In those years the station has undergone continuous development and expansion, driven by the increasing technical and scientific needs of the missions it has supported.

Happy birthday, Kiruna! We look forward to the next 30 years.