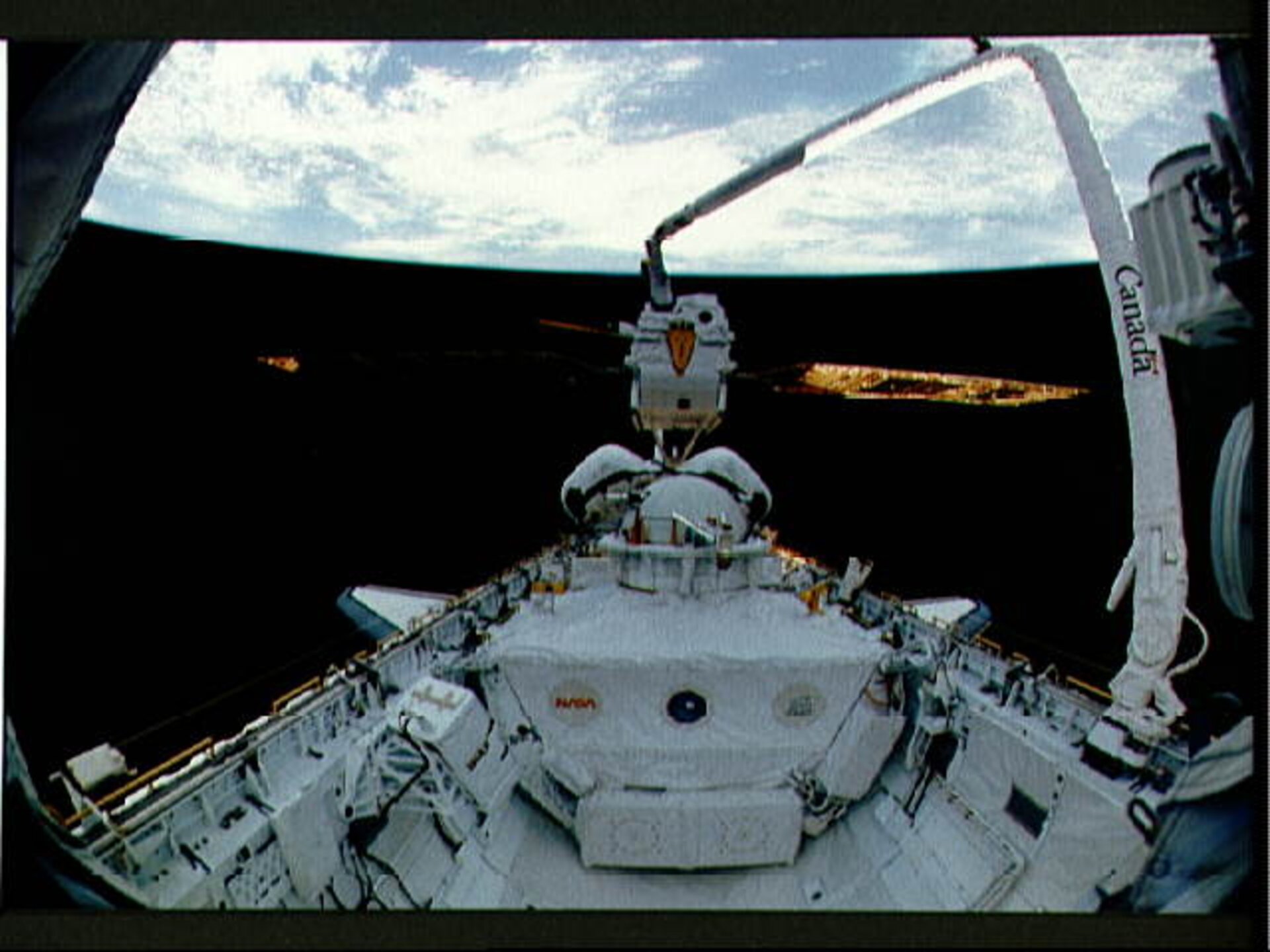 An historic Spacelab Pallet was handed over to the Swiss Museum of Transport today. The Pallet, nick-named 'Elvis', was a critical component of the ESA/NASA Spacelab programme and was used during a Space Shuttle mission in 1992 when Europe's Eureca and TSS-1 payloads were deployed.

The Pallet, once used to support experiments flown in the vacuum of space, was formally handed over by ESA's Bob Chesson, Head of the Human Spaceflight Operations Department, at a ceremony attended by retired ESA astronaut Claude Nicollier.

The museum, in Lucerne, Switzerland, also houses the Eureca platform, which was retrieved from orbit on 1 July 1993 by Shuttle Endeavour.

"I am really delighted to find such a prestigious home for this great piece of Europe's human spaceflight history, and on behalf of the European Space Agency I would like to sincerely thank the Swiss Museum of Transport for taking over the pallet and making it available for education and public display," said Mr Chesson.

Europe's Spacelab was designed to fly in the Space Shuttle cargo bay and enabled scientists to perform a wide range of experiments in microgravity.

The Spacelab system comprised two laboratory modules in short and long versions with airlocks and optical windows, a tunnel and five separate pallets, which could be mounted separate from the Spacelab and exposed experiments to the space environment.

The Spacelab system was used on 25 Shuttle flights until 1998, when the laboratories were retired after in-orbit scientific work was transferred to the International Space Station.

Several pallets were recommissioned for use later in the 2000s, notably for deploying the 3485-kg Canadarm 'Dextre' on Shuttle mission STS-123 in March 2008.

"On STS-46, the Eureca deployment and Tethered Satellite operations were challenging, but could be completed with total success for Eureca, and at least partial success for the satellite 'on a leash' thanks to excellent teamwork within the multinational team," said Dr Nicollier.

He added that, "The Spacelab Pallet worked perfectly and provided the expected services to the Tethered Satellite System. Adding this very well-used pallet to the museum's collection will help educate future generations on the benefits of space science and exploration."

With the winding up of the Shuttle programme, the pallets will no longer be used, and this particular model was transferred to ESA by NASA under a long-term loan agreement.

The Swiss Museum of Transport agreed to take over the terms and conditions of the loan, which stipulates that the Pallet must be used for education and public display purposes.

About the Spacelab Pallet

Europe's first journey into the world of human spaceflight started in August 1973 when ESA's predecessor organisation ESRO and NASA signed a Memorandum of Understanding committing Europe to build a science laboratory for use with the Space Shuttle. Construction of Spacelab started in 1974 with ERNO (now part of EADS Astrium) as prime contractor. Major subcontractors included Matra (France), Aeritalia (Italy) and Dornier Systems (Germany). The Spacelab system comprised laboratory modules in short and long versions with airlocks and optical windows, a tunnel, the pallets and an igloo, as well as ground support equipment.

Spacelab included five external pallets for experiments to be carried out in vacuum, built by Hawker Siddeley Dynamics (then British Aerospace, now BAE Systems). The first set of Spacelab equipment was given to NASA free of charge by ESA in exchange for flight opportunities for European astronauts. A second module was bought from ERNO by NASA for its own use. This is now on display in the Bremenhalle exhibition in Bremen Airport, Germany.

The Spacelab elements were used on 25 shuttle flights, but were decommissioned in 1998 due to the shift of microgravity research from the Shuttle to the International Space Station. A Spacelab Pallet was recommissioned in 2002 for flight on STS-99, the Shuttle Radar Topography Mission (scientific instruments were mounted on the Pallet) and on later flights to transport equipment to and from the ISS. Canada's Dextre Special Purpose Dextrous Manipulator was launched on STS-123 in 2008.

The Pallet was a very versatile piece of equipment. It could carry 3 tonnes of payload, particularly large instruments, experiments requiring exposure to space, and instruments requiring a large field of view, such as telescopes and other optical devices.

The Pallet could be used in single configuration or stacked end-to-end in double or triple configurations, with up to five pallets configured in the Space Shuttle cargo bay.