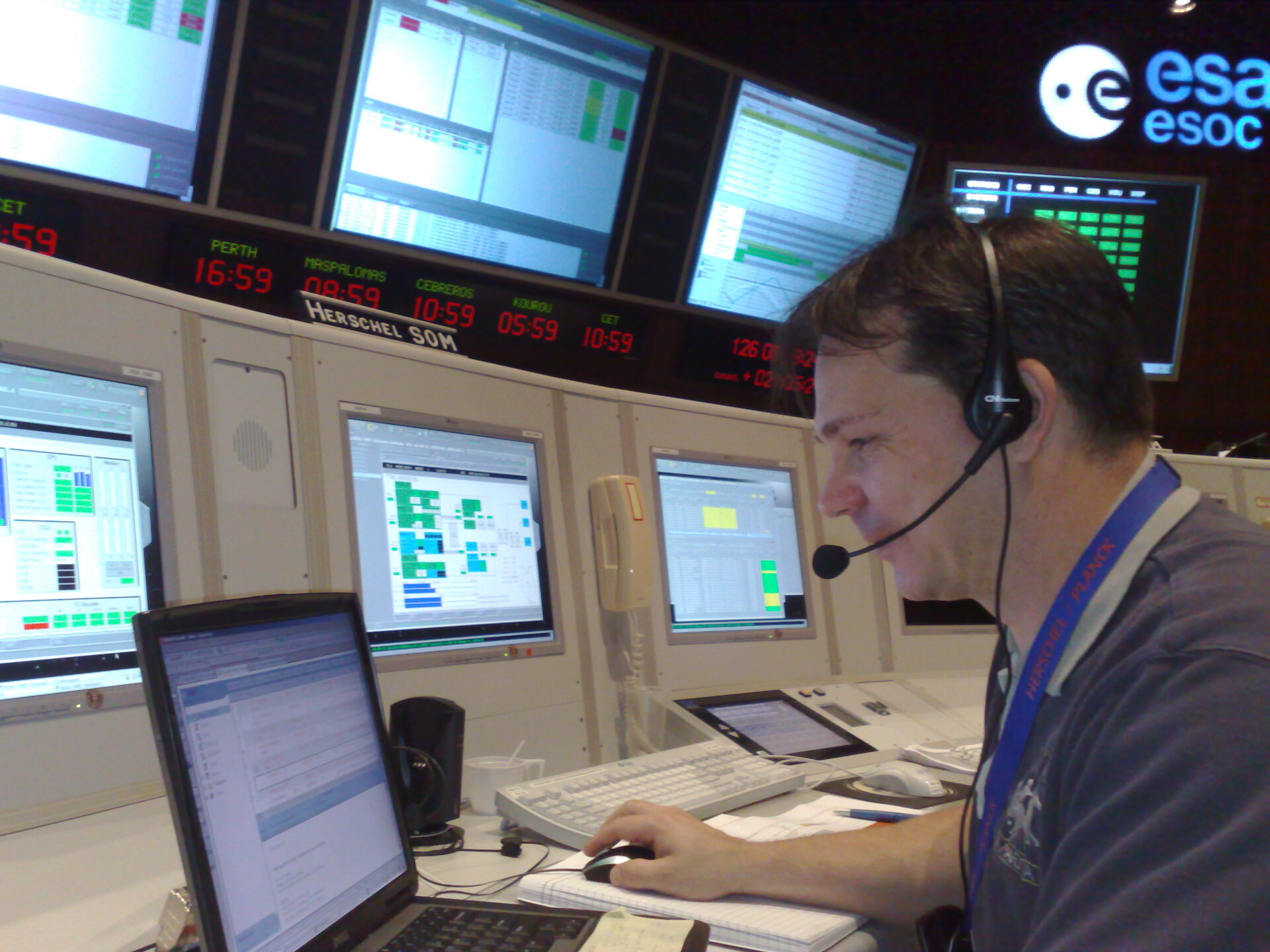 On 14 May, a 'team of teams' will be poised and waiting at ESOC, the European Space Operations Centre, to take over control of Herschel and Planck once they separate from their launcher, Ariane 5 flight V188. Here's a brief look at who's who 'on console' at ESOC.

For liftoff on 14 May, the Ariane launcher with satellites on board will be under control of the experts at ESA's Spaceport at Kourou, French Guiana.

Simultaneously, the Mission Control Team in the Main Control Room (MCR) at ESOC, Darmstadt, Germany, will closely monitor launch progress, ready to take over control of the two satellites upon separation.

Over many months, more than 200 scientists and engineers responsible for operating the two missions or providing infrastructure support have been paced through an exhaustive series of simulations and training sessions - 35 in total as of last week.

Those working on the missions comprise a 'team of teams', organised into an overall Mission Control Team, which is broken down into two separate Flight Control Teams, one per satellite, plus a number of supporting teams. These include Ground Operations, Software Support, Project Support and Flight Dynamics, which in turn are supported by extended sub-teams.

Throughout ESOC, engineers are located in the MCR, the Flight Dynamics Room, the ESTRACK Control Centre and several other specialised support rooms.

On launch day, controllers will be tense but calm, waiting for liftoff of the Ariane 5 launcher from Kourou, French Guiana. Six hours prior to the scheduled 15:12 CEST launch, ESOC will conduct its own 'network countdown', during which proper operation of the 'ground segment' - the software and systems on the ground that support mission operations - will be verified one last time.

Some 55 minutes prior to launch, the Flight Operations Director will conduct the GO/NO-GO roll call over the internal voice intercom, or 'loop'. During the roll call, all supporting teams will verbally confirm their readiness to support the launch.

The roll call is a traditional practise that gives everyone a chance to report any last-minute problems; in addition, the entire Mission Control Team will have taken part in a thorough preflight briefing review to be held on 13 May, so the probability of any undetected issue suddenly appearing is very low.

At L-30 minutes, the Flight Director will report ESOC's readiness for launch via voice loop to the Launch Control Centre in Kourou. And then the waiting begins.

After liftoff: acquisition of signal from the satellites

After liftoff, the satellites will be boosted into orbit and will separate from the launcher at 25:58 (min:sec) for Herschel, followed by Planck at 28:29.

Some 37 minutes after launch, ESA's ESTRACK stations at Perth and New Norcia, located on the west coast of Australia, will intently scan the sky toward the North-West to acquire the first signals from the two satellites as they rise over the horizon above Africa.

In addition to Perth and New Norcia, ESTRACK stations at Cebreros and Maspalomas, Spain, and Kourou, French Guiana, will support the missions during the Launch and Early Orbit Phase (LEOP) - the critical first steps in the satellite's lives beginning after separation from the launcher and continues for several days.

The Herschel and Planck launch is particularly complex, since most of the console positions will be double-staffed since they are two separate missions being operated in parallel. During LEOP many positions in ESOC's control rooms will be staffed 24 hours/day.

In addition to the teams mentioned earlier, other dedicated support teams will be on call at ESOC throughout LEOP, including engineers in the Network Control Centre and engineers responsible for IT and PC support, telecommunications, and others.

In the ESTRACK Control Room (ECC)

In the Flight Dynamics Room (FDR)