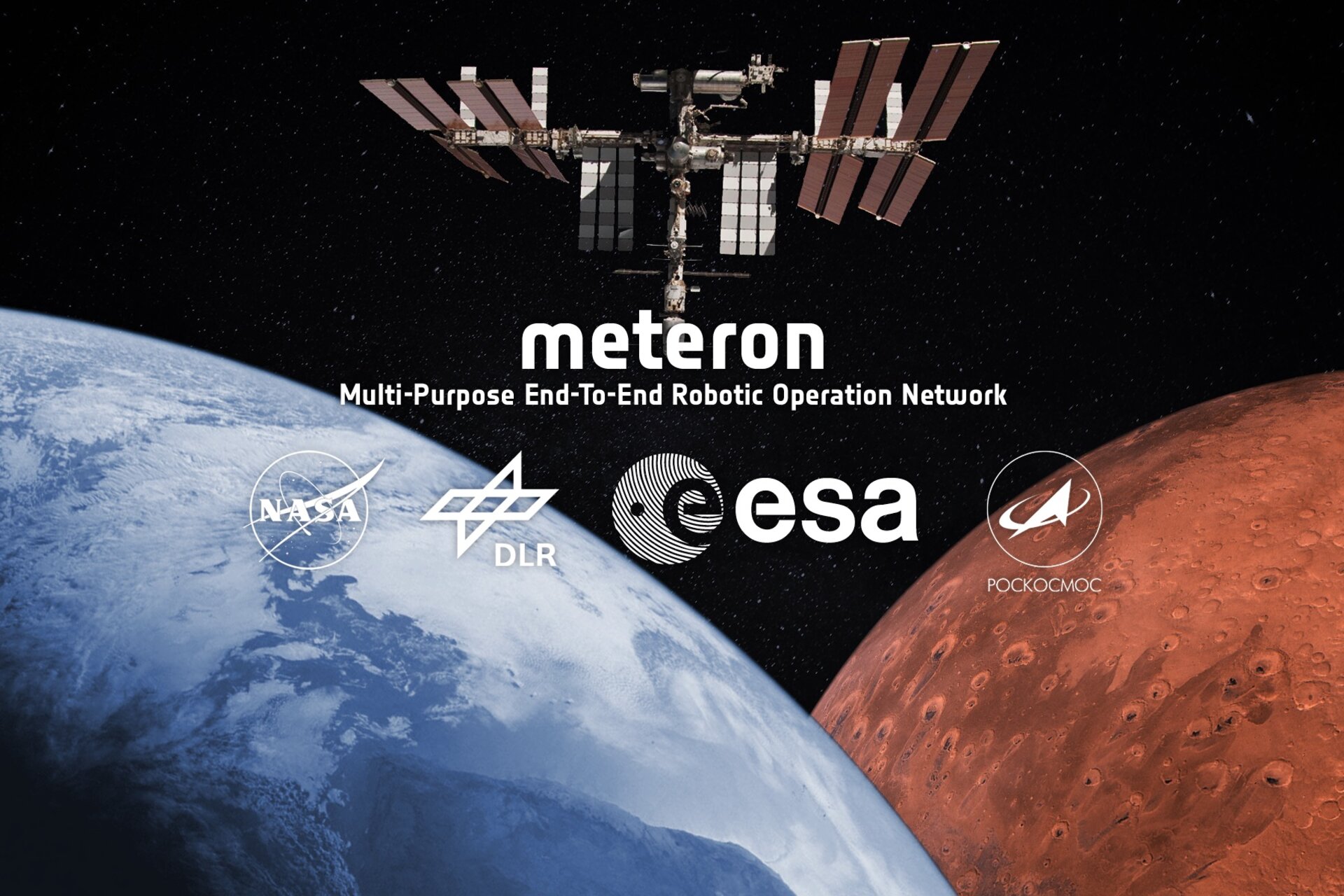 An intermediate step in the human exploration of the Solar System, before landing on the surface, will have humans orbiting around the Moon and Mars. They will be directing robots to explore and build infrastructures on the surface.
This exploration step will allow to further the knowledge of these remote worlds and prepare for human arrival, without paying for the huge cost of landing humans and returning them to orbit.

METERON is a suite of experiments addressing validation of technologies needed to operate robotic assets on the surface of the Moon or Mars from a Lunar/Martian orbital station.
In METERON the International Space Station (ISS) is being used as an analog of future Lunar/Martian orbital stations. Hence METERON is an international endeavour, led by ESA with participation of the German Aerospace Laboratory (DLR), the American National Aeronautics and Space Administration (NASA) and the Russian Space Agency (ROSCOSMOS).

To test the feasibility and effectiveness of operating robots from space, robots on Earth are being controlled from the interior of the ISS by means of force reflecting joysticks and arm exoskeletons enabling haptic feedback and high situational awareness.

In particular the  goals of METERON are:

ESA's Automation and Robotics Section HRI lab has been responsible for the definition, implementation and conduction of the experiments and in particular for the development of the haptic devices, the controllers and the full on-board control station for ISS.
HRI lab collaborates with DLR (Institute of Robotics & Mechatronics), NASA (Johnson Space Centre, AMES Research Centre, Jet Propulsion Laboratory) and Roscosmos with Russian partners (RTC Institute St. Petersburg, Energia).

Haptics-1 is the first of a series of in-flight haptic experiments. Using a single degree of freedom force reflective joystick, an extensive set of physiological data is collected from the astronaut that will help to determine design requirements for the design of haptic devices to be used in Space in the future. Up to now, such data is still not available. It is believed that in micro-Gravity, the perception thresholds might change. In addition, tests will show in which way this type of joystick can be used best, whether wall-mounted or in body-mounted configuration, where the joystick is directly 'strapped' onto the crew's body.

Haptics-2 is an experiment in which teleoperation from space to ground is performed in two protocols. In the first protocol, a connection is made between a haptics joystick on earth and the joystick on the ISS. After a set of small checks are performed, the astronaut and the operator on ground share a handshake through force-feedback. In the second protocol, the astronaut is presented with a remote stiffness discrimination task. The astronaut will probe different stiffness's to examine how their tactile perception has been impacted from exposure to sustained micro-gravity.  To connect with earth, Haptics-2 makes use of a geosynchronous satellite constellation to demonstrate for the first time that bilateral control with force-feedback is feasible, with time delays, in the order of 820 milliseconds. The force signals in Haptics-2 travel for more than 92000 km in a round-trip between the two joysticks that link the operators together.

During the ESA Short Duration Mission a full robotic vehicle equipped with two lightweight manipulators and a camera system was remotely controlled by ESA Astronaut Andreas Mogensen, to perform a sub-millimeter precision task from Space. The experiment is a unique demonstration of technology, highlighting advanced robotic capabilities that can be used in Space and on Earth where human dexterity is required in places that are dangerous or difficult to access. Commanding is performed through a geosynchronous satellite at 36000 km altitude, resulting in communication delays as long as 0.8 seconds. In addition, Interact included precision-tests related to analysing the astronaut’s capability to discriminate stiffness of various objects on Earth. Interact is a pathfinder for human robot interaction and telerobotics in Space as well as on Earth.