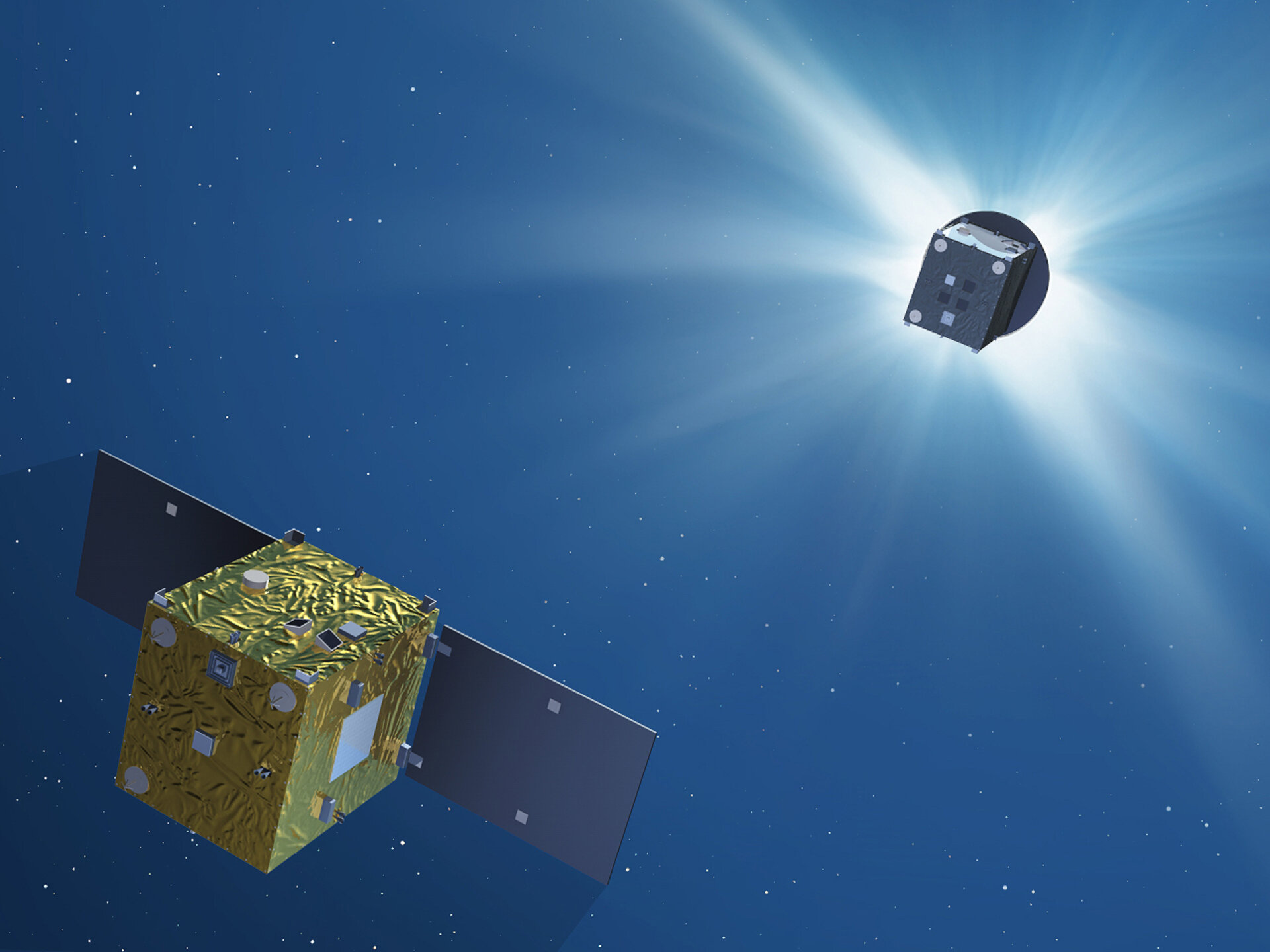 Bring together a small group of highly motivated researchers, grant them full access to laboratory and production facilities, remove all administrative distractions, and let them work intensively for four to six months. That’s what ‘StarTiger’ is all about!

It is a different approach to conducting research and development that aims to demonstrate the feasibility of a new and promising technology within a very short time scale.

Within this initiative, ESA is running a six-month crash effort to design an instrument to operate between a pair of satellites flying in formation. One will cast a precisely-controlled shadow across the other to produce a perpetual solar eclipse, revealing parts of the Sun’s corona usually hidden in sunlight.

ESA's latest StarTiger project is to create a complete working model of such a ‘giant external coronagraph’. The effort began on 15 September, with a core team of seven multidisciplinary experts from France, Belgium, Greece and Italy based at the Laboratoire d’Astrophysique de Marseille (LAM) in France, plus a 20-strong support team. Project hardware is being designed and manufactured, with testing due to begin early next year.

“StarTiger is an initiative within the Agency’s Basic Technology Research Programme (TRP), aimed at facilitating breakthrough innovation,” said Peter de Maagt, the project's manager. “It is innovative not just in terms of technology but also by changing the way research and development is done.”

Eike Kircher, Head of ESA’s TRP, added: “Researchers work together face-to-face, participating in a very dynamic design flow on a rapid turn-around basis. They also work against the clock, because at the end of the process they produce a complete instrument from scratch.”

Closing in on the Sun’s corona

The Sun is a million times brighter than the faint corona around it. The best way of seeing the corona is during a solar eclipse, when the Moon perfectly covers the solar disc. Eclipses are rare however, and last only a few minutes.

Such brief glimpses have left scientists with unanswered questions, including how the corona comes to have a temperature millions of degrees higher than the Sun’s surface, and how ‘coronal loops’ are connected to solar flares and coronal mass ejections.

“Sun-observing satellites such as ESA’s SOHO incorporate internal Sun-shading ‘occulters’ for coronal monitoring,” commented Dominic Doyle of ESA’s Optics Laboratory. “But stray light can spill over the occulter’s edge into the instrument, a phenomenon called ‘diffraction’. So SOHO, for example, can observe only the corona from two solar radii distant from the Sun’s centre, missing the crucial inner zone close to the Sun’s surface.”

StarTiger is developing a method of flying an occulter on a separate spacecraft to minimise diffraction and bring more of the corona into view. The occulter would fly 150 metres away from the observing spacecraft, the two vehicles remaining lined up with the Sun and each other to an accuracy of just a few millimetres.

The StarTiger team is using a large LAM cleanroom to construct and test a scale-model ‘breadboard’ of the coronagraph – which will be capable of spectroscopy as well as high-resolution imaging. Photosensors around the coronagraph’s entrance will monitor the occulter’s shadow, while an LED array on the occulter will let the observing spacecraft track it.

“The demonstrator is being fully developed before our six months is up,” said Sebastien Vives of LAM, leading the StarTiger team. “Such an approach requires a strong commitment from everyone involved, but all of us are very motivated and excited about this project.”

This StarTiger should pave the way for the actual flight of a two-spacecraft coronagraph on ESA’s next-decade Proba-3 mission. The systems and techniques it delivers could also have other formation flying uses.

StarTiger stands for ‘Space Technology Advancements by Resourceful, Targeted and Innovative Groups of Experts and Researchers’.

The initial StarTiger in 2002 resulted in the development of a compact colour terahertz imager. The spin-off ThruVision company went on to market the technology commercially for applications such as airport security. A short-term StarTiger also contributed to the Herschel mission, pinpointing reasons for telescope performance anomalies during cryogenic testing.