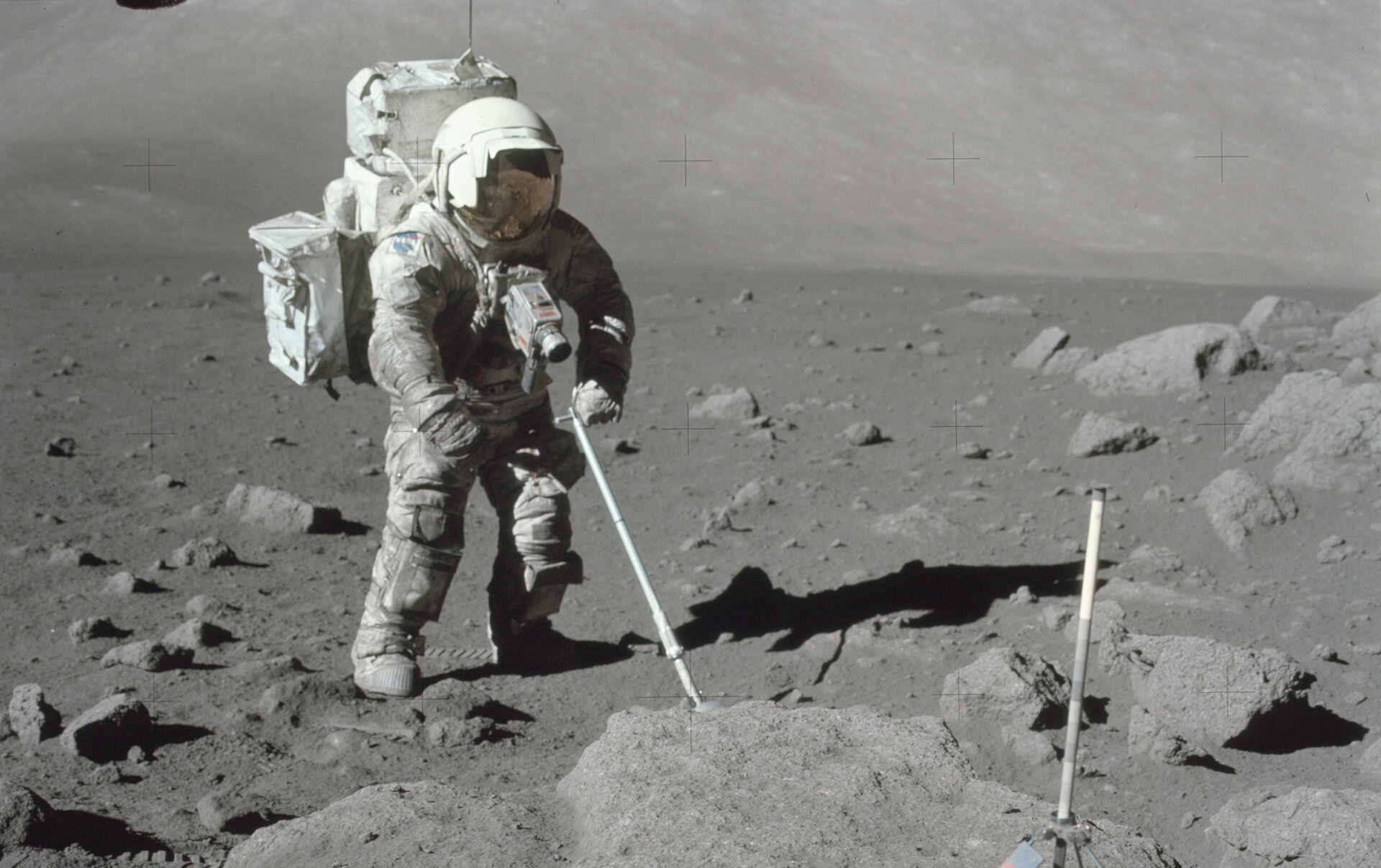 When humans return to the Moon they’ll have formidable challenge lying in wait: lunar dust. The talcum-like lunar regolith is considered the biggest operational problem facing Moon colonists. Within a few days of dust exposure, Apollo spacesuits suffered obscured visors, clogged mechanisms and eroded suit layers. So an ESA team is looking into novel material options to serve as the basis of future spacesuits or protect rovers or fixed infrastructure.

“The idea came up that as ESA’s going back to the Moon we should look into harnessing the many innovations in the materials field since the Apollo spacesuits were designed, more than half a century ago,” remarks ESA materials and processes engineer Malgorzata Holynska.

“So while we are not developing a new spacesuit at this time, we are looking into selecting candidate materials such a suit might use – as well as protective covers for rovers or fixed machinery and infrastructure – and performing some state-of-the-art testing to see how they stand up against simulated lunar conditions, particularly lunar dust.”

As Apollo 12 Commander Pete Conrad noted: “I think probably one of the most aggravating, restricting facets of lunar surface exploration is the dust and its adherence to everything no matter what kind of material, whether it be skin, suit material, metal, no matter what it be and its restrictive friction-like action to everything it gets on.”

That turned out to include spacesuits: “Suit integrities did stay good, but there’s no doubt in my mind that with a couple more EVA’s something could have ground to a halt. In the area where the lunar boots fitted on the suits, we wore through the outer garment and were beginning to wear through the Mylar.”

More recently, China’s Yutu-1 rover is believed to have been immobilised during its second day on the Moon by lunar dust clogging its moving parts.

Lunar dust is present all across the Moon, created by the steady bombardment of micrometeorites smashes the rocky surface into fine particles. Unlike terrestrial dust it has never been weathered by water or wind, so that even microscopic particles still maintain edges of razor sharpness. And the unfiltered energy of lunar sunshine can impart the dust with serious static cling.

“Depending on its area of origin the dust might have very different chemical and abrasive characteristics, with its precise properties depending on the selected landing site – which is another factor of concern,” notes ESA structural engineer Shumit Das.

“One of the key findings from Apollo was that the abrasion effects of the lunar regolith would be the major limiting factor in returning to the Moon. We want to overcome that and enable spacesuits that could be used for many more spacewalks than the few performed per Apollo landing – up to 2 500 hours of surface activities is our assumption.”

ESA’s is overseeing the project, partnering with French human factors specialist Comex, the German Institutes for Textile and Fiber Research and citizen science organisation the Austrian Space Forum, which has a focus on spacesuit research.

A workshop was organised last year to meet with different materials providers, to gain insight into promising options based on the most recent advances.

“No one material can really do the job,” adds Malgorzata. “Instead the concept is to have a layered solution, and define which combination of functional layers works best, in terms of physical and chemical interactions with regolith, and how to best connect them.

“We are then testing these different stacks against criteria contributed by our colleagues from ESA’s Directorate of Robotic and Human Exploration. The challenge here is to make the testing as robust as possible, to come up with credible results to guide our choice of trade-offs and downselection.”

The German Institutes for Textile and Fiber Research is performing the bulk of project testing.

“For instance, one abrasion test involves placing the test material into a tumbler with bricks of simulated lunar material, to see how it lasts over time – which has been adapted from an existing textile test standard,” adds Shumit.

“Classic permeability tests are also being undertaken, where a high-pressure fluid is applied to a material to see if it goes through. And a test chamber is in development intended for ‘thermal cycling’ – exposing material to repeated temperature extremes during vacuum condition.”

From spacewalks to storage

The test regime is looking at the entire life cycle of any future spacesuits, also including storage time between spacewalks. Shumit explains: “Future suits would typically be stored on the Gateway in lunar orbit between surface EVAs. We need to know that suit seals, rubber or other elements would not be degraded by their time in storage, so that also include accelerated ageing tests, including moisture and radiation exposure.”

Supported through ESA’s Technology Development Element for promising new ideas, the project has been featured in the Advanced Materials Technologies journal.