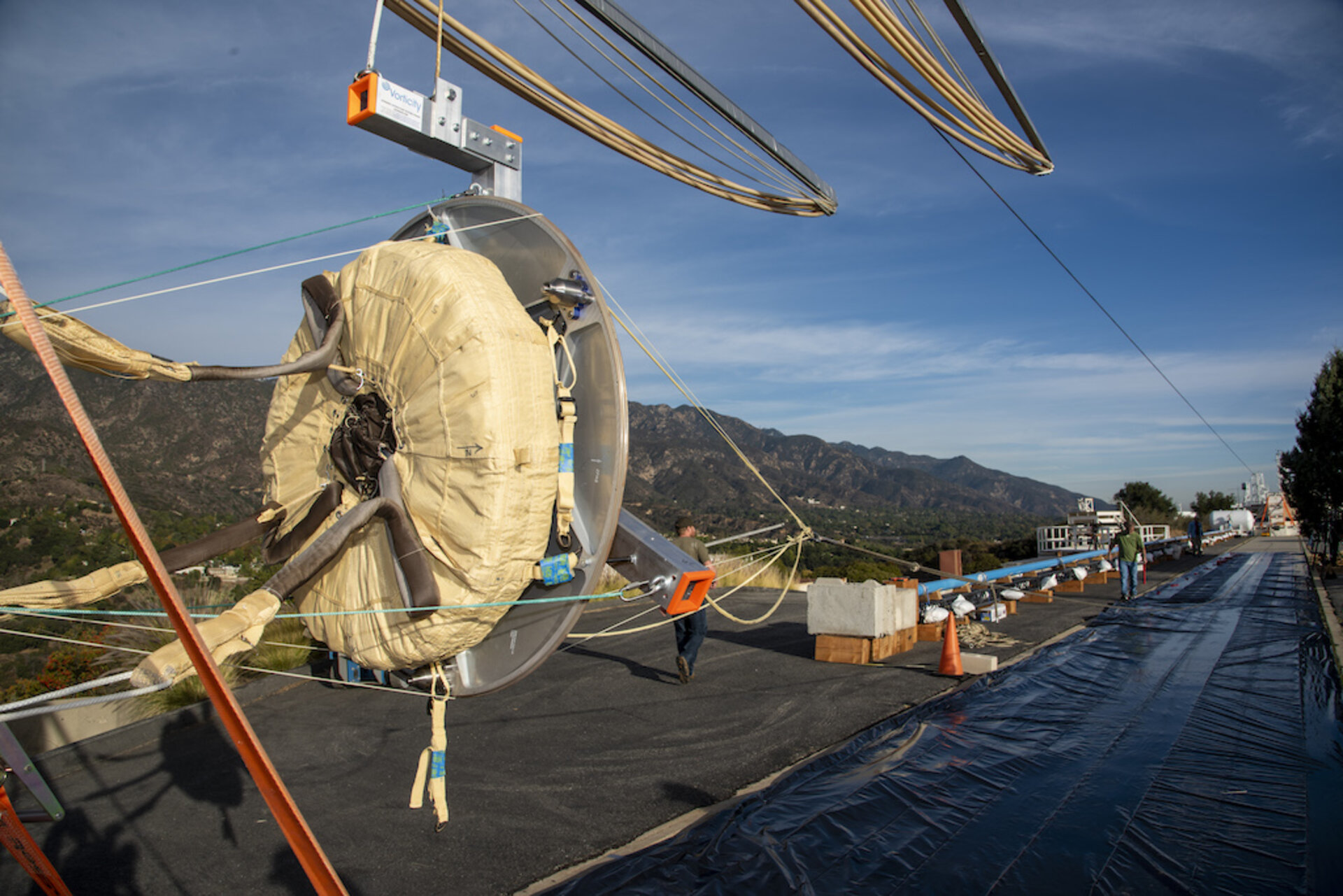 A series of ground-based tests designed to check the extraction of the ExoMars 2020 mission’s parachutes from their bags have started successfully with promising results to keep the mission on track for next year’s launch.

Landing on Mars is a high-risk endeavour with no room for error. In just six minutes, a descent module with its precious cargo cocooned inside has to slow from around 21 000 km/h at the top of the planet’s atmosphere, to a soft landing at the surface controlled by the lander’s propulsion system.

A key element of reaching the surface safely is based around a parachute system.

For ExoMars 2020, which comprises the Rosalind Franklin rover to explore the planet for signs of life, and the Kazachok surface platform to monitor the local environment at the landing site, a two-parachute system is used, each with its own pilot chute for extraction. The first main parachute has a diameter of 15 m and will be deployed while the descent module is still travelling at supersonic speeds, while the second main parachute has a 35 m diameter, the largest to ever fly on Mars.

Earlier this year, during two high-altitude drop tests, damage to both parachute canopies was observed. Intensive investigations revealed that the main issues concerned the parachute bags, and not the parachutes themselves. Thanks to support from NASA to benefit from their hands-on parachute experience, ESA has made modifications to the way the parachutes are released from the bags, to ease the extraction and avoid frictional damage. 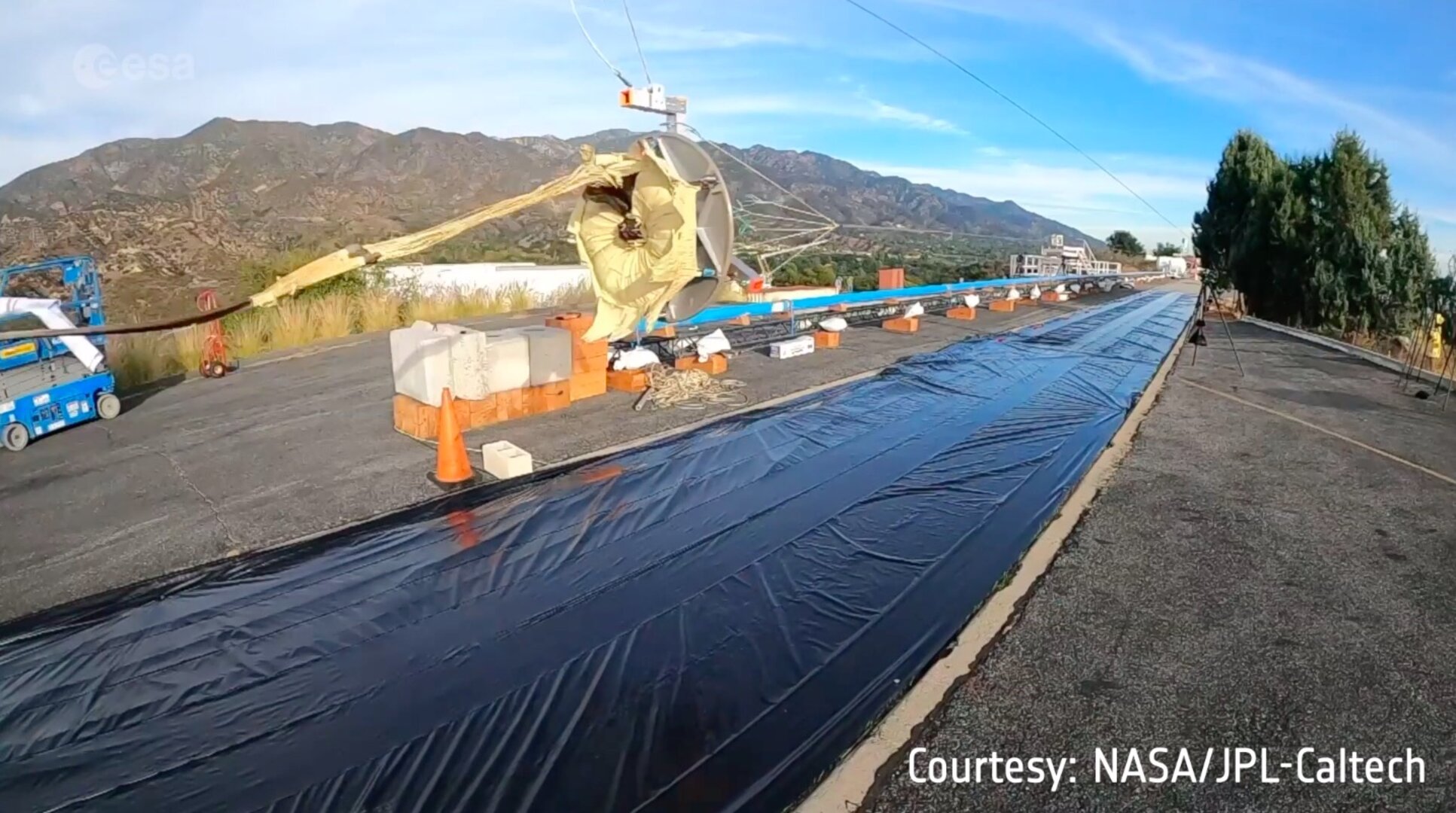 The cooperation with NASA has also provided access to special test equipment at NASA’s Jet Propulsion Laboratory that is enabling ESA to conduct multiple dynamic extraction tests on the ground to validate the new design adaptations prior to the upcoming high-altitude drop tests. The ground tests mimic the high speeds at which the parachutes will be pulled from their bags during the descent phase at Mars.

Calibration tests, including low-speed extraction tests at around 120 km/h on both main parachutes and the first high-speed extraction test at a targeted speed of just over 200 km/h on the first main parachute, have already been completed. The low-speed tests were crucial to verify the stability of the new parachute bag design, while the high-speed tests mimic that at which the parachutes will be pulled from their bags during the descent phase at Mars.

Real-time observations of these initial tests showed a clean and correct release of the parachutes from their bags, with no damages seen in either the parachute system or the bag.

“Landing on Mars is difficult and we cannot afford to have any loose ends,” says Thierry Blancquaert, ExoMars Spacecraft Systems Engineering Team Leader.  “After many hurdles, the parachute system modifications are moving forward, and these preliminary tests show very promising results that pave the way for the next qualification tests.”

To save time and resources, and to quickly test the proof of concept of the new parachute bags, the initial tests were carried out using the repaired parachutes from the high-altitude drop tests. Given the positive results of the first tests, and following the completion of the high-speed tests, the extractions will be repeated using the existing parachute ‘spares’, which have not been previously damaged or undergone repairs.

Importantly, unlike the high-altitude drop tests which require complex logistics and strict weather conditions, making them difficult to schedule, the ground tests can be repeated on a quick turnaround, buying significantly more time in the test campaign and reducing risk by allowing more tests to be conducted on a short time frame.

Further high-speed tests are planned in the coming weeks to confirm the results of the preliminary tests. Then the parachute systems will be tested again in two high-altitude drop tests in Oregon, US, in February and March 2020. The tests have to be completed prior to the ExoMars project’s ‘qualification and acceptance review’ planned for the end of April in order to meet the 2020 launch window (26 July–11 August).

In the meantime, the rover is nearing completion of its environmental test campaign at Airbus, Toulouse, France. At the same time, the flight model spacecraft that will transport the mission from Earth to Mars, and which contains the carrier module coupled with the Russian descent module, is at Thales Alenia Space, Cannes, France, where it underwent thermal environment tests. The scientific instruments of the surface platform are now being integrated by the Russian Academy of Sciences (IKI). The rover is expected in Cannes in late January, with the integration into the lander foreseen end February.

The mission will launch on a Proton-M rocket with a Breeze-M upper stage from Baikonur, Kazakhstan. Once landed safely in the Oxia Planum region of Mars on 19 March 2021, the rover will drive off the surface platform, seeking out geologically interesting sites to drill below the surface, to determine if life ever existed on our neighbour planet.

All parachute system qualification activities are managed and conducted by a joint team involving the ESA project (supported by Directorate of Technology, Engineering and Quality expertise), TAS-I (prime contractor, in Turin), TAS-F (PAS lead, in Cannes), Vorticity (parachute design and test analysis, in Oxford) and Arescosmo (parachute and bags manufacturing, in Aprilia). NASA/JPL-Caltech has provided engineering consultancy, access to the dynamic extraction test facility, and on-site support. The extraction tests are supported through an engineering support contract with Airborne Systems, who also provide NASA’s Mars 2020 parachutes, and by Free Flight Enterprises for the provision of parachute folding and packing facilities.

The ExoMars programme is a joint endeavour between ESA and Roscosmos. In addition to the 2020 mission, it also includes the Trace Gas Orbiter (TGO) launched in 2016. The TGO is already both delivering important scientific results of its own and relaying data from NASA’s Curiosity Mars rover and InSight lander. It will also relay the data from the ExoMars 2020 mission once it arrives at Mars in March 2021.