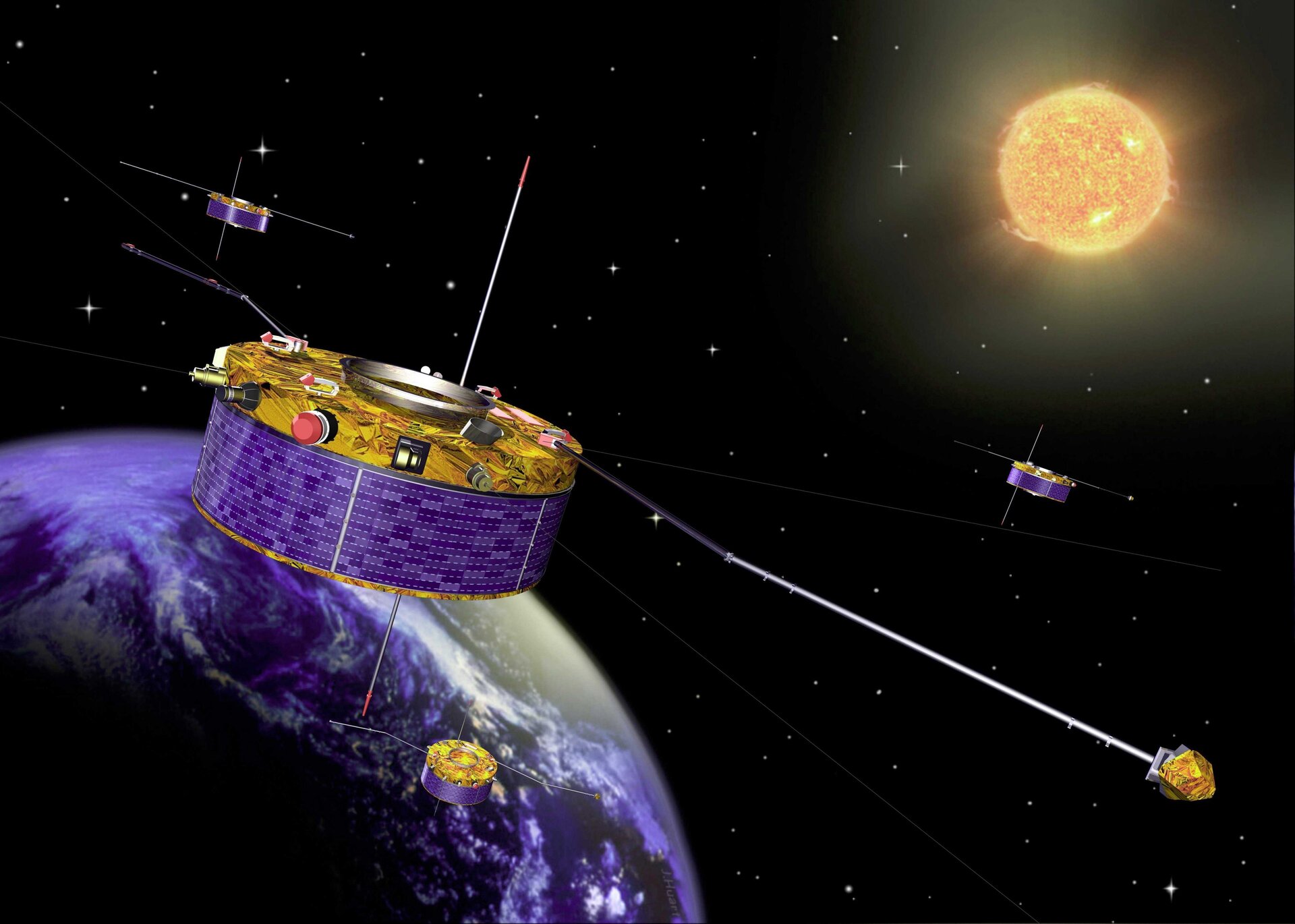 After weeks of manoeuvres, Samba and Tango, two of ESA’s four Cluster satellites are now orbiting in formation, separated by only 17 km. This is the closest two ESA satellites have ever been in routine operations and will enable new scientific discoveries.

Cluster, ESA’s mission comprising four identical satellites, relays the most detailed information ever about how the solar wind affects our planet, and is the first mission to study the Sun-Earth connection in 3D.

This is done by studying the behaviour of near-Earth plasma, an extremely variable state of matter, composed of ions and electrons but electrically neutral, spread over large distances. A key to understanding it and studying complex geophysical processes in different regions is to have space-based, multi-point observations and to be able to vary the distances between spacecraft, as these processes operate at different scales in nature.

This is why the four Cluster satellites - Salsa, Tango, Rumba and Samba - are not always at the same distance from each other. The inter-spacecraft distances are varied depending on the type of phenomena under study. Close manoeuvring is required to boost the timing and spatial resolution of scientific observations.

The 17 km separation between Samba and Tango, reached on 20 June 2007, may seem safe enough, but is a mere whisker in operational terms. The two spacecraft are travelling at approximately 6 km/s with respect to Earth and now, almost seven years after launch, the batteries on both spacecraft are well beyond their nominal lifetime. Unpredictable battery anomalies have already lead to unplanned velocity changes three times in the past.

Before the current manoeuvre campaign, Samba and Tango were separated by a distance of 450 km, following each other around the Earth in a polar elliptical orbit from roughly to in altitude, every 57 hours.

In this initial configuration Rumba, Salsa and the closer Samba-Tango pair formed an isosceles triangle in space across. This was oriented roughly perpendicularly to the so-called ‘neutral sheet’. This is an area of Earth’s magnetosphere consisting of a thin electrical current sheet located within the magnetotail on the night side. The study of the physics of the current sheet is one of the main goals of Cluster.

At the request of the Cluster scientific community and through a series of very delicate manoeuvres to avoid collisions, ESA’s missions controllers modified this orientation and reduced the distance between Samba and Tango to 17 km. They eventually positioned the triangle of satellites roughly parallel to the equator inside the neutral sheet.

“The inter spacecraft distance of 17 km is approaching the limits of what can be attained with Cluster, where the four spacecraft are operated independently,” says Detlef Sieg, flight dynamics engineer at ESOC. “Future missions will need inter-satellite communication systems to achieve even smaller distances.”

In the words of Philippe Escoubet, ESA’s Cluster and Double Star Project Scientist, “This space ballet is another major achievement of the Cluster flight control team at ESOC. Their contribution is key to the on-going scientific success of the Cluster mission”.