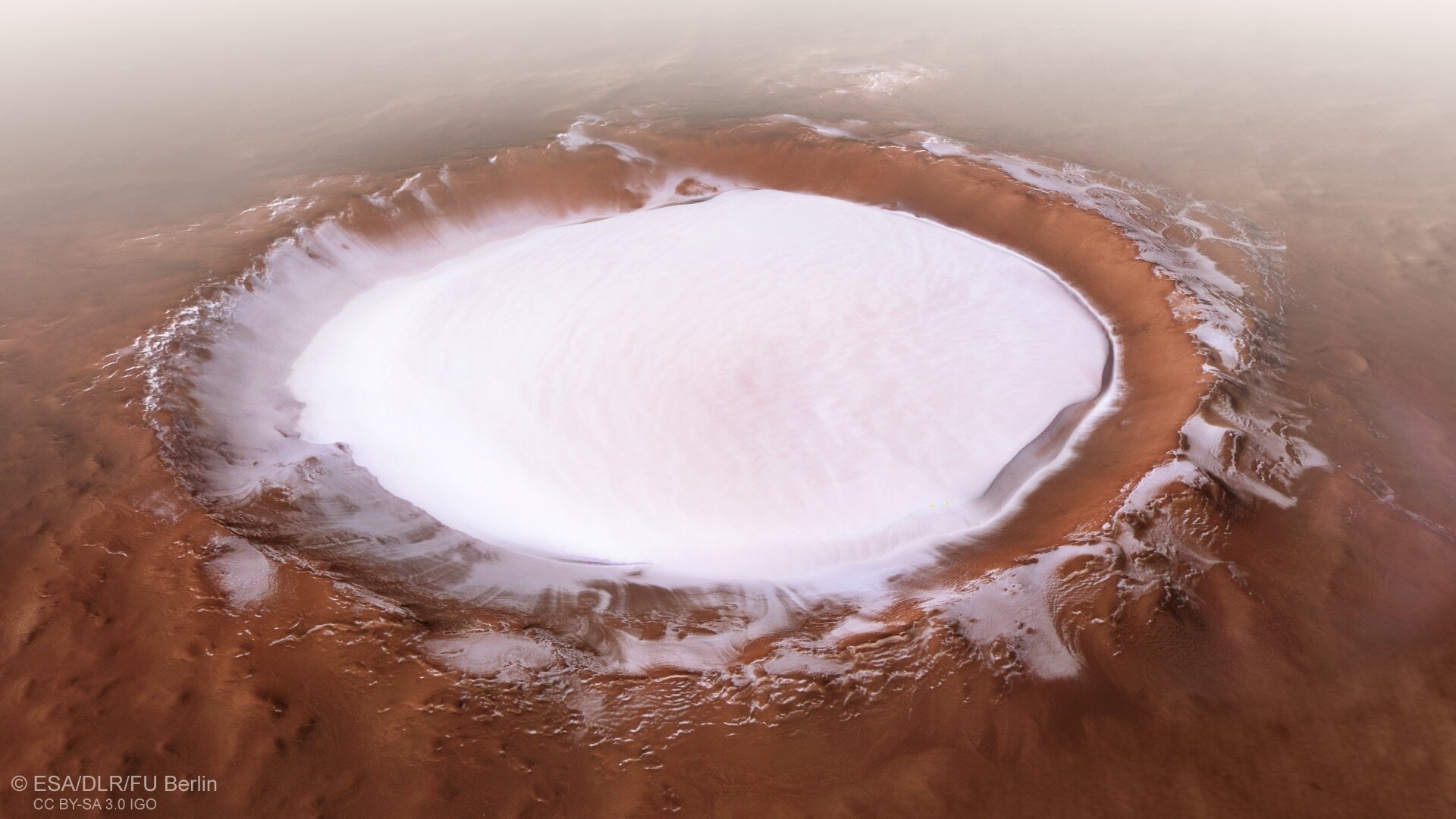 This image shows what appears to be a large patch of fresh, untrodden snow – a dream for any lover of the holiday season. However, it’s a little too distant for a last-minute winter getaway: this feature, known as Korolev crater, is found on Mars, and is shown here in beautiful detail as seen by Mars Express.

ESA’s Mars Express mission launched on 2 June 2003, and reached Mars six months later. The satellite fired its main engine and entered orbit around the Red Planet on 25 December, making this month the 15-year anniversary of the spacecraft’s orbit insertion and the beginning of its science programme.

These images are an excellent celebration of such a milestone. Taken by the Mars Express High Resolution Stereo Camera (HRSC), this view of Korolev crater comprises five different ‘strips’ that have been combined to form a single image, with each strip gathered over a different orbit. The crater is also shown in perspective, context, and topographic views, all of which offer a more complete view of the terrain in and around the crater.

Korolev crater is 82 kilometres across and found in the northern lowlands of Mars, just south of a large patch of dune-filled terrain that encircles part of the planet’s northern polar cap (known as Olympia Undae). It is an especially well-preserved example of a martian crater and is filled not by snow but ice, with its centre hosting a mound of water ice some 1.8 kilometres thick all year round.

This ever-icy presence is due to an interesting phenomenon known as a ‘cold trap’, which occurs as the name suggests. The crater’s floor is deep, lying some two kilometres vertically beneath its rim.

The very deepest parts of Korolev crater, those containing ice, act as a natural cold trap: the air moving over the deposit of ice cools down and sinks, creating a layer of cold air that sits directly above the ice itself.

Behaving as a shield, this layer helps the ice remain stable and stops it from heating up and disappearing. Air is a poor conductor of heat, exacerbating this effect and keeping Korolev crater permanently icy.


The crater is named after chief rocket engineer and spacecraft designer Sergei Korolev, dubbed the father of Soviet space technology.

Korolev worked on a number of well-known missions including the Sputnik program – the first artificial satellites ever sent into orbit around the Earth, in 1957 and the years following, the Vostok and Vokshod programs of human space exploration (Vostok being the spacecraft that carried the first ever human, Yuri Gagarin, into space in 1961) as well as the first interplanetary missions to the Moon, Mars, and Venus. He also worked on a number of rockets that were the precursors to the successful Soyuz launcher – still the workhorses of the Russian space programme, and used for both crewed and robotic flights.

The region of Mars has also been of interest to other missions, including ESA’s ExoMars programme, which aims to establish if life ever existed on Mars.

The Colour and Stereo Surface Imaging System (CaSSIS) instrument aboard the ExoMars Trace Gas Orbiter, which began operating at Mars on 28 April 2018, also snapped a beautiful view of part of Korolev crater – this was one of the very first images the spacecraft sent back to Earth after arriving at our neighbouring planet.

CaSSIS imaged a 40-kilometre-long chunk of the crater’s northern rim, neatly showcasing its intriguing shape and structure, and its bright icy deposits.