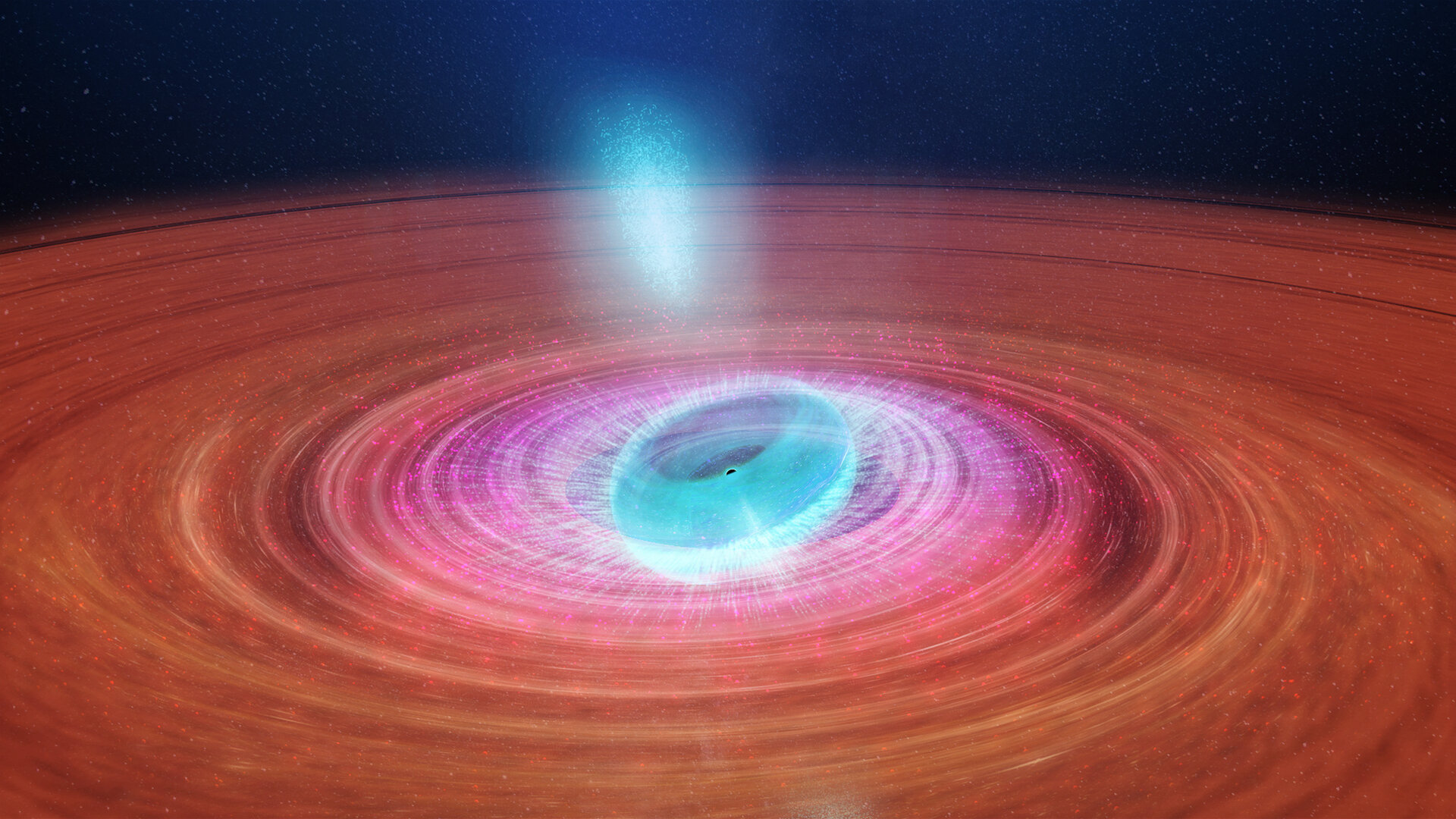 After 26 years of dormancy, it woke up again in 2015, becoming for a short period of time the brightest object in the sky observable in high-energy X-rays.

Astronomers from all over the world pointed their ground and space-based telescopes towards the celestial object, and discovered that the black hole was behaving somewhat strangely.

A new study, based on data collected during the 2015 outburst, has now revealed the inner workings of this cosmic monster. The results are reported today in the journal Nature.

“During the outburst we observed details of the jet emissions when material is ejected at a very high speed from the vicinity of the black hole,” says Simone Migliari, an astrophysicist at ESA who is a co-author on the paper.

“We can see the jets shooting out in different directions on a timescale of less than an hour, which means that the inner regions of the system are rotating quite fast.”

Usually astronomers see the jets shooting straight out from the poles of black holes, perpendicular to the surrounding disc of material that is accreted from the companion star.

Previously, there had only been one black hole observed with a rotating jet. It was, however, rotating much slower, completing one cycle in about six months.

The astronomers could observe the V404 Cygni jets in radio waves using telescopes like those of the Very Long Baseline Array in the US.

Meanwhile, high-energy X-ray data from Integral and other space observatories helped them decode what was happening at the same time inside the inner region of the 10 million kilometre-wide accretion disc. This was important since it is the mechanics of the disc that causes the jet’s strange behaviour.

“What’s different in V404 Cygni is that we think the disc of material and the black hole are misaligned,” says Associate Professor James Miller-Jones, from the International Centre for Radio Astronomy Research (ICRAR) at Curtin University, Australia, who is the lead author of the new paper.

“This appears to be causing the inner part of the disc to wobble like a spinning top that is slowing down, and fire jets out in different directions as it changes orientation.”


During the outburst, a large amount of the surrounding material was falling into the black hole at once, temporarily increasing the accretion rate of disc material towards the black hole and resulting in a sudden surge of energy. This was seen by Integral as an abrupt increase of the X-ray emission.

Integral’s observations were used to estimate the energy and geometry of the accretion onto the black hole, which in turn were crucial to understand the link between the incoming and outflowing material to create a complete picture of the situation.

“With Integral, we were able to keep looking at V404 Cygni continuously for four weeks, while other high-energy satellites could only take shorter snapshots,” says Erik Kuulkers, Integral Project Scientist at ESA.

Scientists have been studying what caused this strange misalignment. One possibility is that the black hole spin axis may have been tilted by the ‘kick’ received during the supernova explosion that created it.

“The results would fit in a scenario, also studied in recent computer simulations, where the accretion flow in the vicinity of the black hole and the jets can rotate together,” says Erik.

“We should expect similar dynamics in any strongly-accreting black hole whose spin is misaligned with the inflowing gas, and we will have to take into account varying jet inclination angles when interpreting observations of black holes across the Universe.”

“A rapidly-changing jet orientation in the stellar-mass black hole V404 Cygni” by J. C. A. Miller-Jones et al is published in Nature.

Integral, the International Gamma-ray Astrophysics Laboratory, was launched on 17 October 2002. It is an ESA project with instruments and a science data centre funded by ESA Member States (especially the Principal Investigator countries: Denmark, France, Germany, Italy, Spain and Switzerland), and with the participation of Russia and the USA. The mission is dedicated to spectroscopy and imaging of celestial gamma-ray sources in the energy range 15 keV to 10 MeV with concurrent source monitoring in X-ray (3–35 keV) and optical (V-band, 550 nm) wavelengths.