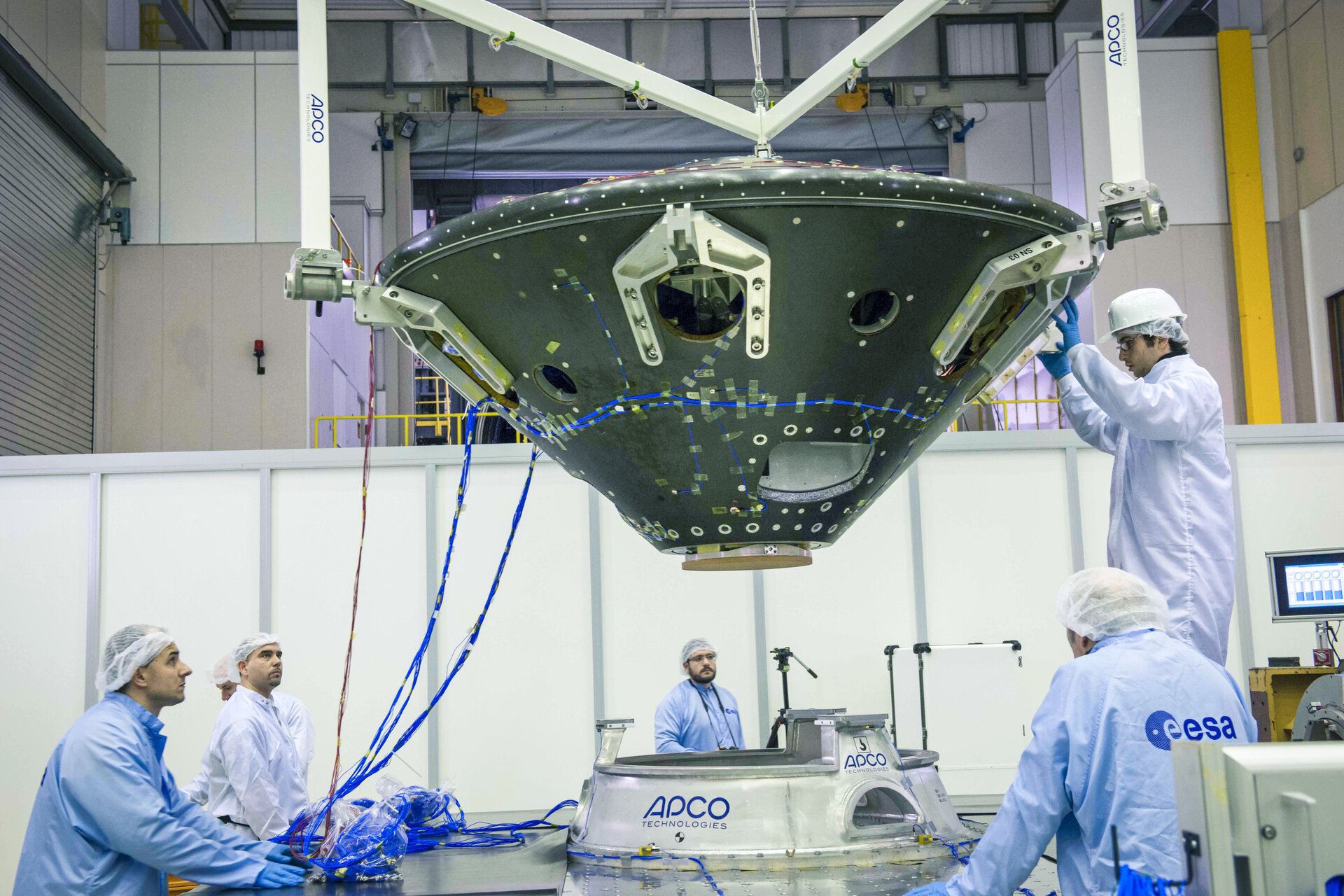 The structural model of the Entry, Descent and Landing Demonstrator Module, or EDM, of ESA’s 2016 ExoMars mission has been subjected to a series of intense shaker tests to simulate the rigours of launching into space.

EDM will be launched to Mars together with the Trace Gas Orbiter and will test key landing technologies in preparation for the 2018 ExoMars rover mission and subsequent missions to Mars.

The orbiter will search for evidence of methane and other atmospheric gases that could be signatures of active biological or geological processes. It will also act as a relay for EDM and the ExoMars rover, which will search the planet’s surface and drill to depths of 2 m, looking for signs of life, past and present.

Before being launched to the Red Planet, each component of the mission must undergo thorough testing to certify it for the journey from Earth to the surface of Mars, and for the harsh space environment.

EDM arrived at ESTEC, ESA’s technical centre in Noordwijk, the Netherlands, in mid-February, on a lorry from the Turin facility of Thales Alenia Space in Italy.

After unpacking in one of ESTEC’s cleanrooms, it was subjected to a leak-test, to verify the bio-seal between its main structural elements, the aeroshell, front shield and back cover.

The bio-seal prevents contamination of the inside of EDM from Earth-borne organisms during ground transportation and testing.

After that, EDM has undergone a series of vibration tests on the ESTEC Test Centre Multishaker and QUAD shaker. These intense tests qualify the spacecraft design by ensuring that it will be able to withstand the vibrations it will experience when it lifts off on a Proton rocket in 2016.

During the tests, EDM was mounted on a table where it was shaken up and down or from side to side for several minutes over a frequency range of 5 Hz to 2 kHz.

Afterwards, another leak demonstrated that the bio-seal had not been degraded by the vibration tests.

The EDM structural model has now returned to the Turin factory, where it will undergo further structural testing. This will include tests to simulate entering the martian atmosphere and deploying the module’s parachutes.

The ExoMars missions in 2016 and 2018 are being performed by ESA in partnership with Russia’s Roscosmos space agency.