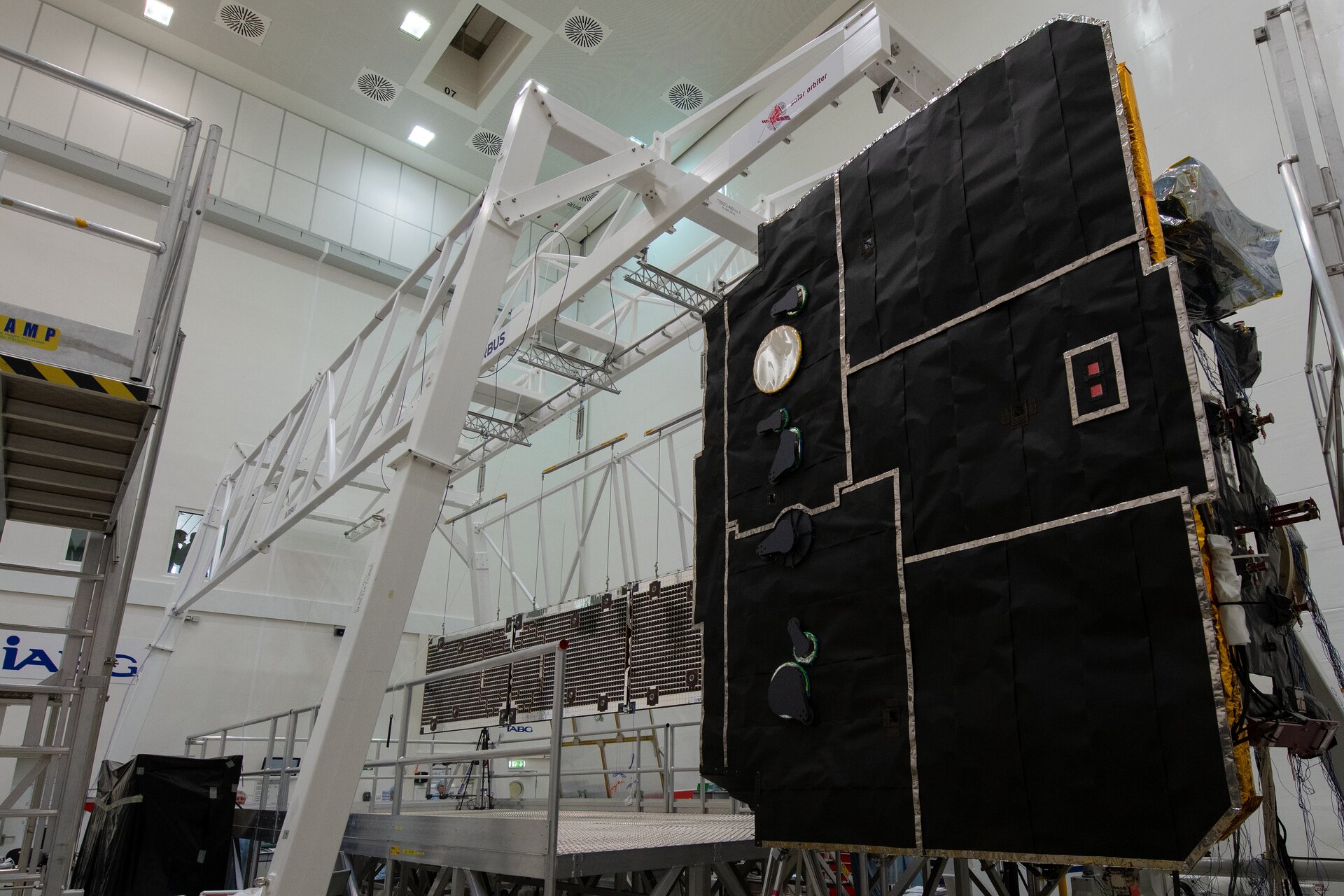 Solar Orbiter must operate for years in one of the most hostile regions of the Solar System. At closest approach, approximately 42 million kilometres from the Sun, it will be at just over a quarter of the distance between the star and our planet. Not even the scorched inner planet Mercury gets this close to the Sun. The closest Mercury ever approaches is around 58 million kilometres, but that’s still enough to heat its surface to around 430°C, which is more than hot enough to melt lead.

To protect the 1.8 tonne spacecraft from such extremely high temperatures, ESA and the spacecraft’s prime contractor, Airbus Defence and Space, have developed unique heatshield technologies with other industrial partners. In particular, the Irish company Enbio has developed a novel product called SolarBlack.

SolarBlack is a calcium phosphate preparation that has been applied to the outermost layer of Solar Orbiter’s heatshield. It is excellent at absorbing heat and will not decay by shedding layers or gradually turn into gas, no matter how much infrared and ultraviolet radiation it soaks up. Behind this thin layer of SolarBlack, the outer portion of the heatshield is made up of twenty wafer-thin layers of titanium, which can withstand temperatures of up to 500°C. Behind this is a gap, which guides the heat out to the sides and away from the spacecraft. The only bits of hardware that cross this gap are ten star-shaped brackets that attach the top layer of the heatshield to the base.

The base itself is a 5 cm-thick aluminium honeycomb that is covered by 30 layers of lower-temperature insulation. This can handle temperatures of up to 300°C. The entire heatshield is then fixed to the spacecraft by ten 1.5 mm-thin titanium ‘blades’ to minimise the transfer of heat through the spacecraft’s superstructure.

The heatshield is the key to making this mission possible, as Solar Orbiter will be subjected to thirteen times the amount of solar heating that satellites in Earth’s orbit experience.

Solar Orbiter relies on solar power to generate its electricity. It consists of solar panels that can be rotated, so that when the spacecraft is close to the Sun the panels can be angled away to protect them from getting too hot. When Solar Orbiter is in the outer parts of its orbit, however, the arrays can be rotated face-on to provide enough power.

To accomplish this, the instruments are split into two types, identified as in situ and remote sensing. The in situ instruments measure the conditions around the spacecraft itself. Some can remain in the shadow of the heatshield; others must look towards the Sun and so are equipped with their own mini heatshields or protection. The remote-sensing instruments measure what is happening at large distances away in the Sun. Small sliding doors in the heatshield let sunlight into the internally-mounted remote-sensing instruments. On most of these, special windows block out most of the heat to protect the instrument, though two have other arrangements: the SPICE instrument allows all the light in and internally filters out what it doesn't want, and the wide-field camera, SoloHI, peeks around the side of the sunshield but doesn't look at the Sun directly.