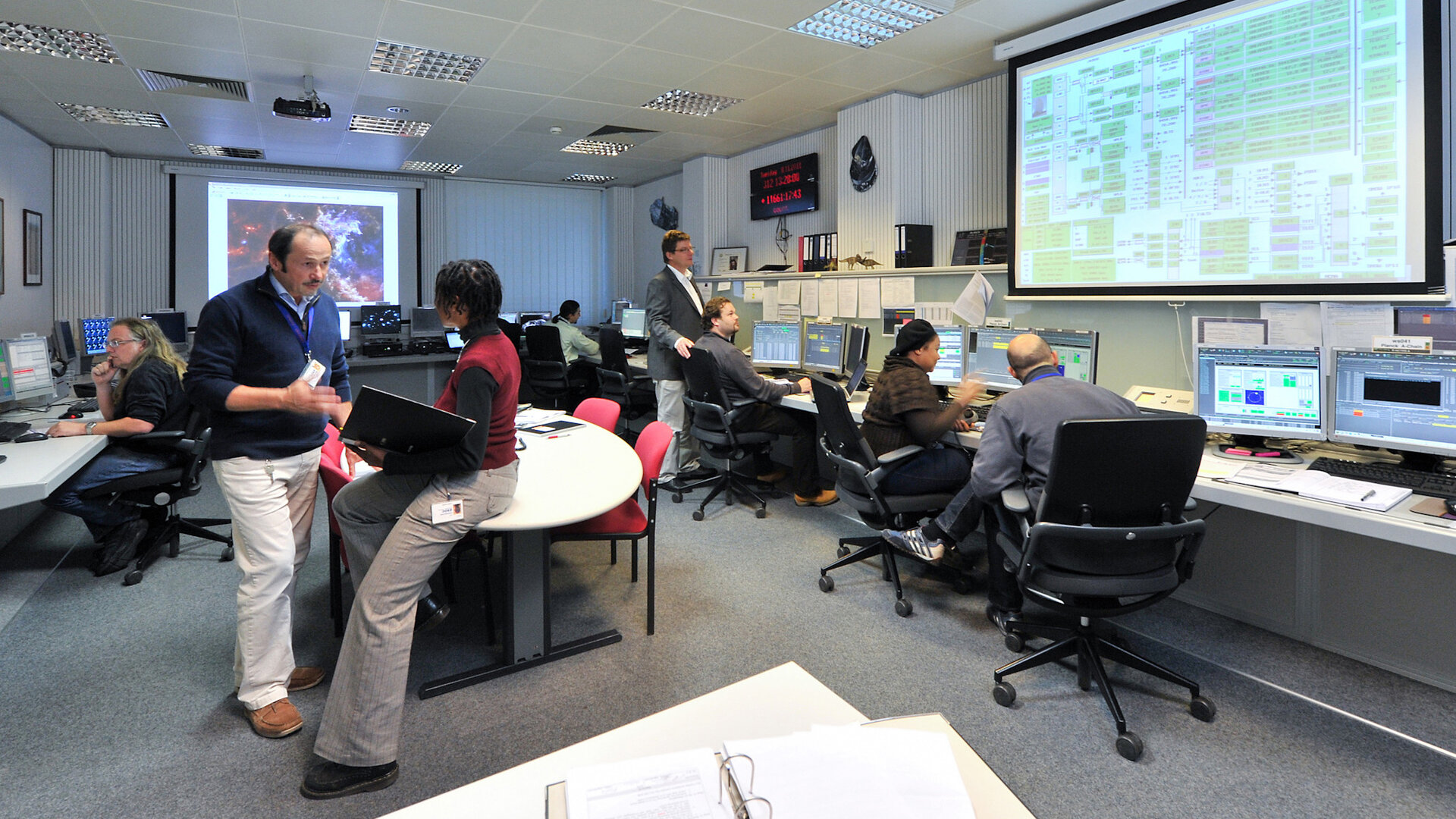 With the launch a success, and the spacecraft safely in orbit, the Flight Control Team settles in for what may turn into years of routine daily activities. The key elements of success at ESOC include long-term planning, accommodating changing conditions as the mission progresses through eclipses or orbital evolutions and – always – anticipating the unexpected.

In the months and years after launch, the Flight Control Team at ESOC works closely with the mission’s Science Operations Centre (SOC), for ESA’s planetary, observatory and solar missions, or the Payload Data Ground Segment (PDGS), for the Agency’s Earth missions, to plan and carry out the daily observation activities of the satellite (the team may work closely with other centres involved in the mission as well).

These plans must not only take into account the scientists’ requests for specific observations, for example radar imaging of a particular region of a planet’s surface, they must also consider the constraints associated with operation of the satellite.

… and there are many more!

The flight control team works daily with specialist teams at ESOC in the areas of flight dynamics, software systems, Estrack stations and others to ensure that the mission is fully supported, especially during demanding periods such as eclipses, solar conjunctions, manoeuvres or orbit changes, which, in varying degrees, are experienced by every mission.

Mission operations during the routine phase involves, for most missions, certain critical events that require particular attention and many months or even years of preparation. Successfully handling these is one of the specialities of ESOC, where an enormous reservoir of expertise and skill in all types of mission operations exists and which we apply in carrying out difficult and often unique operations.

For instance, most interplanetary missions experience several critical events in their lifetime, from swing-bys – planetary gravity assists – to fast fly-bys of small solar system objects like asteroids or comets to landings and orbit entries.

These operations require highly precise trajectory determinations and a complex sequence of actions that have to work perfectly the first time, as they do not usually offer a second opportunity. Particularly critical are the insertions into planetary orbit or any landing activity: anything going wrong in these critical events may result in the total loss of a mission.

Other types of missions also experience critical events during their ‘routine’ phase: these include special trajectory adjustments, collision avoidance manoeuvres, re-entry or de-orbiting operations at the end of life, etc.

In fact, the routine phase can be anything but!

Since the 1960s, ESOC has built up the tools and expertise required to perform re-entries, de-orbiting, collision avoidance manoeuvres and other complex actions in a robust, reliable and safe way.

Not all missions progress smoothly, however, and in the harsh environment of space unexpected events sometimes occur. These can have numerous causes: for instance, a critical on-board component can fail due to mechanical or thermal stress, a previously undetected bug in pre-loaded software can suddenly cause an anomaly or solar radiation can cause a vital electronic chip to stop working.

Unexpected problems can also arise in ground systems; at least these have the benefit of happening in computers, hardware and software that engineers can physically examine or replace.

For every alarm condition raised, spacecraft controllers identify the anomaly and take immediate recovery actions, using the flight control procedures developed at ESOC prior to launch.

Recovery actions first aim to stabilise the situation and ensure the spacecraft’s basic survival. Next, the problem is analysed and the cause isolated.

If the cause can be removed – because it was due to a temporary glitch or it can be solved by an on-board software update or by switching a failed hardware unit to an equivalent redundant unit – the solution is implemented, the relevant procedures updated and the nominal mission can be resumed.

If the failure is permanent and non-recoverable, the ingenuity of ESOC’s operations experts comes into play! Teams devise and implement a work-around solution that ensures the continuation of the mission even in the presence of the failure, and often without affecting the mission’s scientific goals.

Teams also regularly train on recovering missions from unexpected anomalies; if a new recovery procedure needs to be devised for a complex unforeseen anomaly, it will be developed and exercised on the simulator before the operation is attempted on the spacecraft itself.

In the past decades, ESOC has developed an enviable record of recovery and rescue of missions thought initially to be totally lost. These include:

A spacecraft is designed to fulfil the mission objectives for a defined period of time, ranging typically from two to ten or more years. In some cases, mission termination can be unexpected and dramatic, but normally termination is planned in order to not lose contact with the spacecraft and to control it while it moves into a safe graveyard orbit.

It is now common practice at ESA to apply space debris mitigation measures, which are especially important in densely populated orbits. For example, geostationary spacecraft are boosted 300 km above (or below) the geostationary orbital plane, to a disposal orbit where they don’t pose a danger to active spacecraft.

Spacecraft in low or medium orbits are typically commanded to re-enter into the Earth’s atmosphere, where they burn up.

Whatever the fate of the spacecraft, the mission is considered permanently ended once ground contact with the spacecraft is no longer possible.