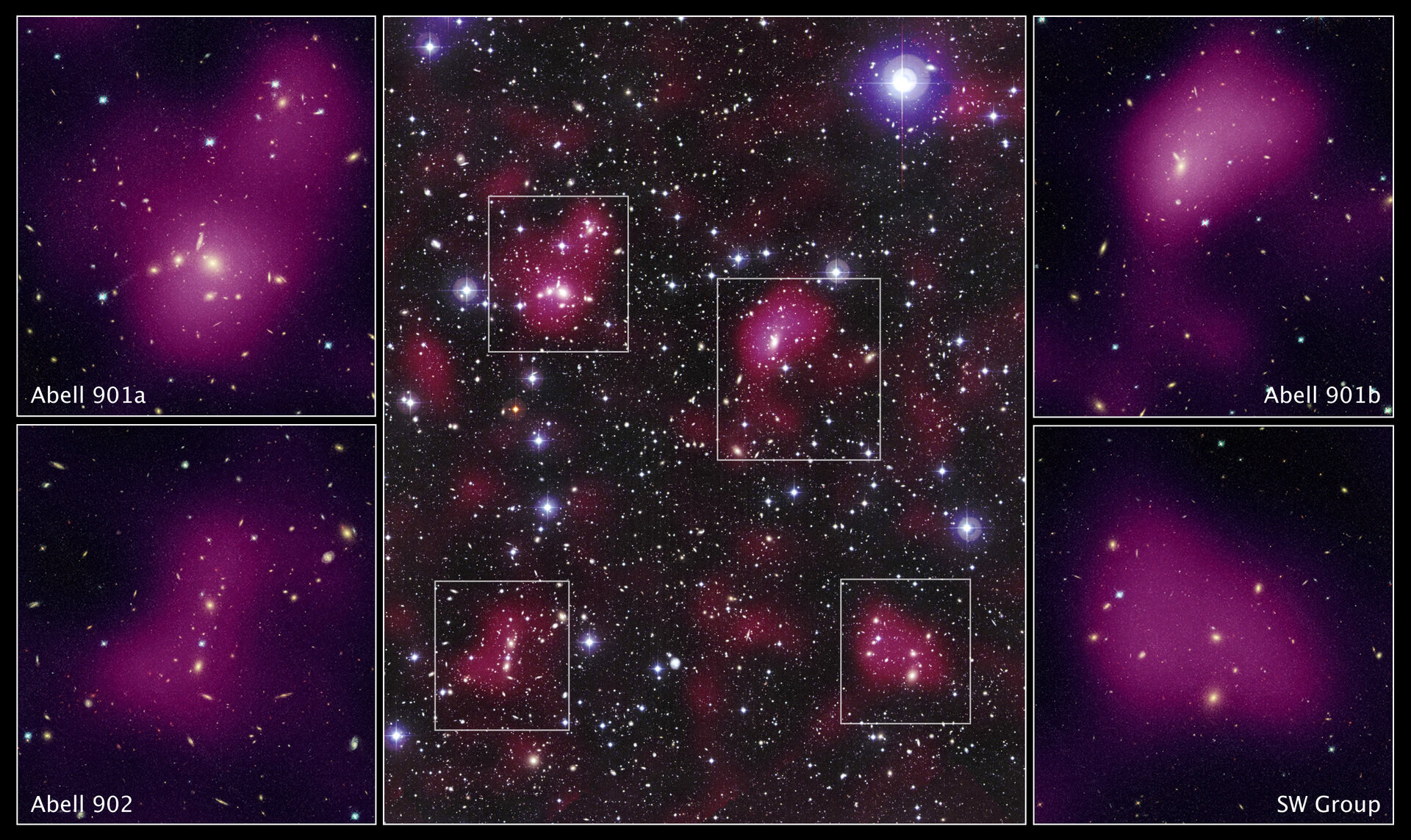 These images reveal the distribution of dark matter in the supercluster Abell 901/902, composed of hundreds of galaxies.

The image in the centre shows the entire supercluster. Astronomers assembled this photo by combining a visible-light image of the supercluster taken with the MPG/ESO 2.2-metre telescope in La Silla, Chile, with a dark matter map derived from observations with the NASA/ESA Hubble Space Telescope./p>

The magenta-tinted clumps represent a map of the dark matter in the cluster. Dark matter is an invisible form of matter that accounts for most of the Universe's mass. The image shows that the supercluster galaxies lie within the clumps of dark matter.

Hubble cannot see the dark matter directly. Astronomers inferred its location by analyzing the effect of so-called weak gravitational lensing, where light from more than 60 000 galaxies behind Abell 901/902 is distorted by intervening matter within the cluster. Researchers used the observed, subtle distortion of the galaxies’ shapes to reconstruct the dark matter distribution in the supercluster.

The image was assembled by combining a visible-light image of the supercluster with a map of the dark matter distribution.

The Hubble study pinpointed four main areas in the supercluster where dark matter has pooled into dense clumps. These areas match the location of hundreds of galaxies that have experienced a violent history in their passage from the outskirts of the supercluster into these dense regions. The four close-up images flanking the central photo are Hubble views of the four dense clumps of matter. To make this image, astronomers superimposed the dark matter map over a Hubble visible-light image of the supercluster galaxies.

The images are part of the Space Telescope Abell 901/902 Galaxy Evolution Survey (STAGES), which covers one of the largest patches of sky ever observed by the Hubble telescope. The area surveyed is so wide that it took 80 Hubble images to cover the entire field.

Hubble’s Advanced Camera for Surveys made the observations in June and July 2005 and in January 2006.