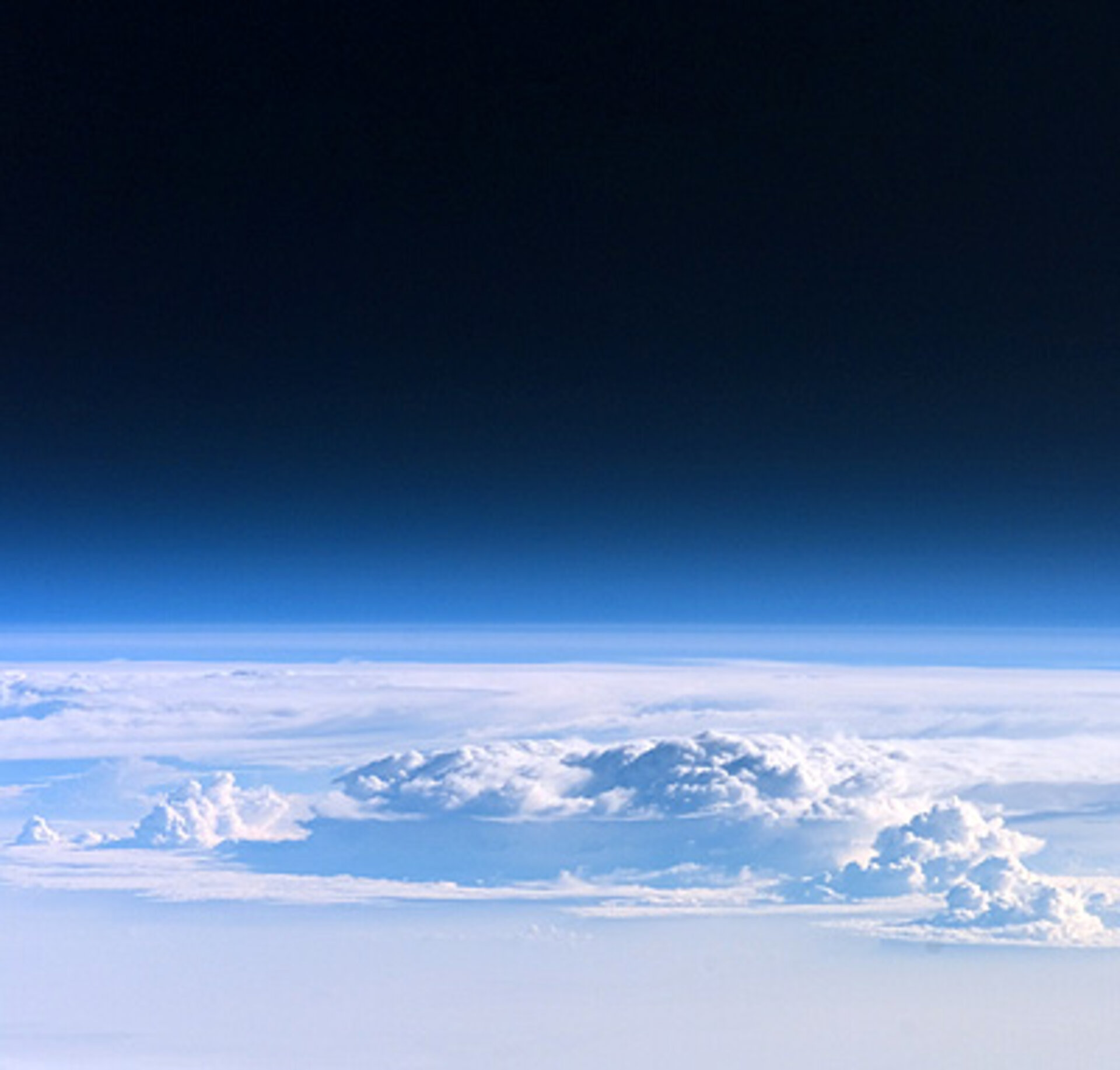 The atmosphere is a complicated yet essential element of our habitat in space, and contains many different chemicals that may be good or bad depending on their location and quantities. Using satellites to scan Earth's atmosphere reveals a plethora of information that is difficult or impossible to see from the ground. From their vantage point high above us, satellites can collect data on the different chemicals to better understand and manage the environment.

Earth observation satellites see the world through a wide enough frame to observe large-scale phenomena. By continuously watching over Earth, they can highlight long-term changes in the composition of the atmosphere, for example to monitor the depletion of the ozone layer due to atmospheric pollution or changing levels of specific greenhouse gases. This can also help us understand more about climate change, and what we can do to reduce it.

Through its set of Earth observation satellites, ESA is dedicated to observing Earth from space and supports scientists and policy makers in Europe and worldwide by providing high quality data.

What is Discovery & Preparation doing in this area?

ESA is committed to developing cutting-edge technology to further understand our planet, improve our daily lives, support effective policy making and benefit businesses and the economy. Many steps forward in the development of such technology were made possible by exploratory research into new concepts carried out by ESA’s Discovery & Preparation activities.

Discovery & Preparation has contributed to ESA’s development of a new set of satellites for the EU's Copernicus programme. Some of these satellites are already collecting and delivering information the programme needs to discover more about our planet, with more satellites still to be launched over the next few years. Monitoring atmospheric composition is a huge part of the programme, especially for the Copernicus Sentinel-4, -5 and -5P missions.

Discovery & Preparation has supported studies that have been instrumental in enabling the Copernicus Sentinels to collect the most beneficial data about the atmosphere and for this information to be used effectively. A study carried out in 2009, for example, presented mission concepts and observation techniques that could monitor the chemistry of the atmosphere, with the key aim of defining the roles of the Copernicus Sentinel-4 and -5 satellites in monitoring air quality and climate protocol. Another study explored how atmospheric pollution can be quantified when scientists use data from Copernicus Sentinel-4 to monitor air quality across Europe and North Africa.

Copernicus' Sentinel-5 will keep an eye on air quality, as well as monitoring ozone, ultraviolet radiation and the absorption and radiation of energy by gases in the atmosphere. One early Discovery & Preparation study explored how satellite observations could contribute to working out exactly how much air pollution is human-made to support monitoring of the Kyoto Protocol. Another study specifically investigated how to ensure that instruments measure two of the most potent greenhouse gases – carbon dioxide and methane – as effectively as possible close to Earth’s surface.

Whilst the Copernicus Sentinel-1, -2, and -3 missions each consist of two dedicated satellites, Copernicus Sentinel-4 and -5 will be payloads onboard a Meteosat Third Generation and MetOp Second Generation satellite respectively. The Meteosat and MetOp programmes provide weather data to monitor the climate and improve weather forecasts. Many Discovery & Preparation studies have contributed to these programmes.

In 2013, Discovery & Preparation launched a Sysnova campaign for ideas for missions that would improve our ability to monitor the chemical make-up of the atmospheric. The call was answered by Thales Alenia Space and the University of Leicester, who planned a constellation of nanosatellites that could regularly and accurately measure the amount of harmful nitrogen dioxide close to Earth's surface.

August 2018 saw the launch of ESA's Aeolus satellite, the first mission to monitor the movement of the wind on a global scale to improve the accuracy of weather and climate predictions. Many Discovery & Preparation studies have supported Aeolus, including one that investigated how a mission could study the mesosphere – the 'gateway' between Earth's environment and space – using a lidar instrument. Another established a long-term database of aerosol and cloud lidar measurements to support continuous and harmonised observations over the next decades, and one assessed the operational value of space-borne radar and lidar measurements of clouds and aerosol particles.

What else is ESA doing?

As a world leader in the field of Earth observation, ESA has been monitoring the atmosphere since the launch of ERS-2 and its atmospheric ozone research sensor in 1995. In 2002, ESA launched the largest Earth observation spacecraft ever built – Envisat – with an instrument dedicated to measuring trace gases in the troposphere and stratosphere, the layers of the atmosphere closest to Earth’s surface.

Contact with Envisat was lost suddenly in 2012, and now Copernicus Sentinel-5P is the main atmosphere detective until Sentinel-4 and -5 are launched in the early 2020s. Copernicus Sentinel-5P carries the state-of-the-art Tropomi instrument to map a multitude of trace gases such as nitrogen dioxide, ozone, formaldehyde, sulphur dioxide, methane, carbon monoxide and aerosols – all of which affect the air we breathe and therefore our health and the climate.

Once Copernicus Sentinel-4 and -5 are launched on their Eumetsat-operated meteorological satellites, they will provide information to support European policies. The main services will include monitoring air quality, stratospheric ozone and solar radiation, as well as climate monitoring.

As well as contributing to the Copernicus Sentinels and Meteosat and MetOp meteorological satellites, ESA has developed a number of Earth observation missions dedicated to scientific research, including EarthCARE, which will shed light on the role that clouds and aerosols play in reflecting solar radiation back out to space and trapping infrared radiation emitted from Earth's surface. Clouds remain one of the biggest mysteries in our understanding of how the atmosphere drives the climate system. Therefore, an improved understanding of the relationship between clouds, aerosols and radiation is one of the highest priorities in climate research and weather prediction.

What are other space agencies doing?

NASA has developed a set of Earth observation satellites, many of which contribute to atmosphere and climate change research. The Orbiting Climate Observatory 2, for example, is currently measuring atmospheric carbon dioxide to characterise sources and sinks of this gas and quantify how carbon dioxide levels change over the course of a year. NASA's Suomi NPP mission is also helping scientists understand, monitor and predict long-term climate change, as well as tracking the spread of unhealthy air pollutants through the atmosphere.

Among other tasks, NASA's Aqua mission collects information about water vapour, aerosols and dissolved organic matter in the air. Terra also monitors the atmosphere, including pollution in the troposphere, the distribution of clouds, and their contribution to the transfer of energy from Earth's surface to the top of the atmosphere, whilst Aura keeps an eye on ozone levels, air quality and climate. NASA's Cloudsat mission measures the altitude and properties of clouds, providing information on the relationship between clouds and climate to help answer questions about global warming.

NASA worked with French space agency CNES on the CALIPSO mission to provide new insight into the role that clouds and aerosols play in regulating Earth’s climate. In 2018, CNES launched CFOSAT together with the Chinese space agency, CNSA, that is helping us better understand and predict climate change by monitoring ocean surface wind and waves.

CNSA are also launching the Gaofen series of high-resolution imaging satellites. Several have already been launched and the data they collect is being used for climate change monitoring. Gaofen-5, for example, carries instruments to detect greenhouse gases and investigate the atmospheric environment.

This year the Canadian Space Agency (CSA) launched the three-satellite RADARSAT Constellation Mission to help governments track climate change in Canada and beyond. The mission followed on from RADARSAT-1 and -2 and can capture images more frequently and precisely than its predecessors. The CSA also developed two instruments – MOPITT and OSIRIS – that respectively fly onboard NASA's Terra and Sweden's Odin satellites. MOPITT gathers long-term data on carbon monoxide concentrations and OSIRIS measures concentrations of ozone, aerosols and nitrogen dioxide.

The series of Meteor satellites led by Russian space agency Roscosmos provide many environmental services, including monitoring global climate and measuring the Earth-atmosphere system. The organisation also oversaw development of the Electro-L/GOMS-2 satellite that images the upper atmosphere.

Closer to home, the Germany space agency DLR launched TerraSAR-X in 2007, providing data to help scientists investigate climate change. The satellite has so far delivered hundreds of thousands of images, and even the first analyses document indisputable details of climate change, including the retreat of glaciers across the globe. Tandem-L and EnMAP and. DLR also works with ESA on processing data from ESA missions.