A robotic arm reaches out to grapple a drifting satellite but its grip slips, pushing the space junk out into the void. True weightlessness is impossible to replicate for long on Earth, but a new ESA laboratory is doing the next best thing: simulating zero-g in 2D.

It relies on a trio of air-bearing platforms scooting across the flattest surface by far in ESA’s ESTEC technical centre in the Netherlands – a 4.8 x 9 m epoxy floor smoothed to within 0.8 mm.

This space-age ‘air hockey table’ was first tested last month, with a robotic arm reaching out to touch a free-floating platform.

The centrepiece of ESA’s new Orbital Robotics and Guidance Navigation and Control Laboratory, it will serve proposals for missions aimed at microgravity or low-gravity environments. 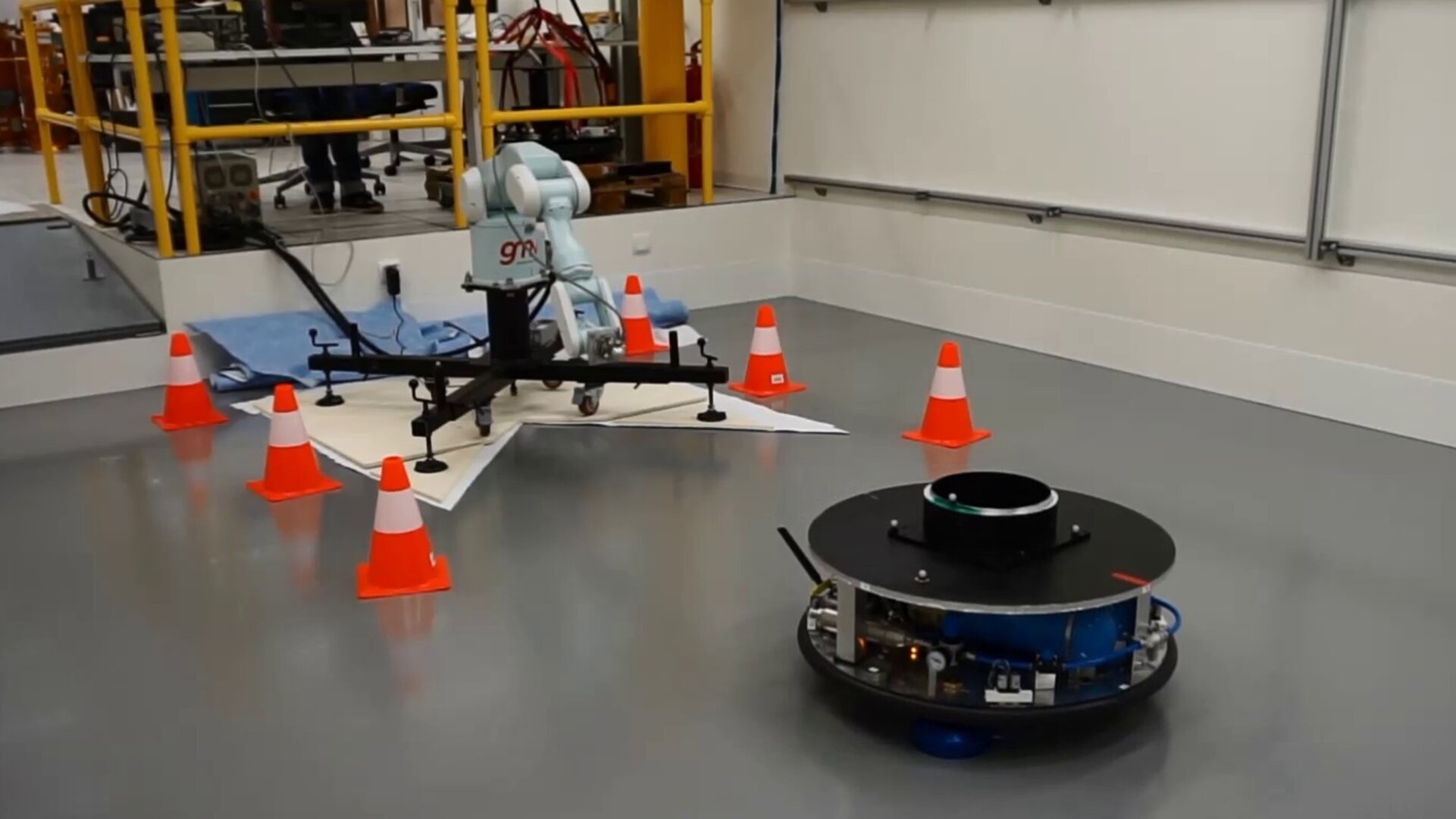 These include e.Deorbit to retrieve a derelict satellite, Phootprint to land on the Mars’ low-gravity moon Phobos, and the Asteroid Impact Mission to put down a lander on an asteroid.

“We cannot reproduce weightlessness in three dimensions,” explains ESA’s Kjetil Wormnes. “Instead, we reduce it to a 2D version, but with the same kind of free-floating behaviour.

“This is important because these effects can be counterintuitive – even a very light contact force often triggers a big change in motion.

“We’re able to capture this very precisely with sensors inside the platforms plus a dozen motion-tracking cameras on the walls.”

The air-bearing platforms drift across the pristine floor in near-silence, broken by clicks as a robotic arm reaches out to grab them. They operate as mini-hovercrafts, floating on a bed of air flowing from internal or external supplies.

The platforms can carry more than 100 kg, with their designs partly inspired by larger pneumatic platforms used to transport full-size satellites within the site’s nearby Test Centre.

“The first test used an arm from Spain’s GMV company,” notes trainee Hendrik Kolvenbach. “We will now check the data we gathered against 3D weightless simulations performed by GMV using a pair of six-degree-of-freedom robotic arms. ”

“Such robotic arm interaction is a tried-and-tested means of simulating weightless scenarios, with the arms programmed to react accordingly, but there is always a millisecond-level delay as the system responds. The advantage with the new set-up is each reaction following contact really is instantaneous.”

“Once we cross-check the two sets of tests and see we are operating with fidelity, we can work on future simulations in conjunction, with the methods overlapping to some extent and also contributing extra value.”

The new lab aims to complement research performed by ESA’s Automation and Robotics and Guidance Navigation and Control sections in their existing labs, and is reusing existing equipment as much as possible.

Proposed future simulations include low-gravity touchdowns, with one wall fitted out as a planetary surface for a platform to land on.