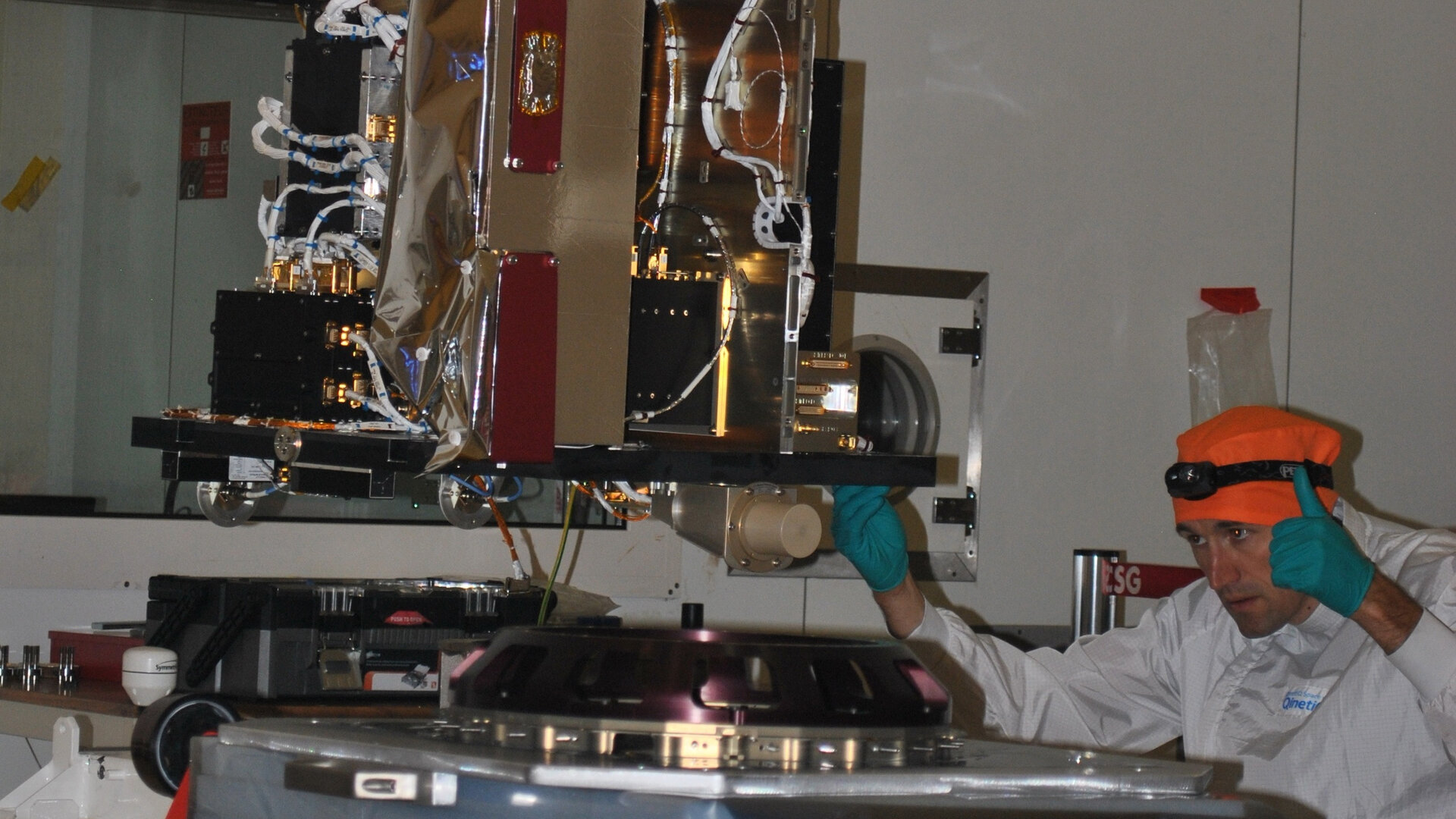 Today was mainly dedicated to software validation testing. An important fit check with the flight cone adapter was performed, followed by its separation. The satellite was unbolted from its stands and lifted with the facility crane. The cone was then mounted on the satellite bottom board. This allowed verification of the correct interface while also allowing the pre-routing of the umbilical harness along the separation cone. The umbilical harness will be used from the moment the satellite leaves its standalone configuration, to monitor the onboard battery as well as to detect the separation from the launch at the moment of release in orbit.

At the end of the fit check the satellite was put back in place on its integration stand.

In order to perform these activities, engineers dressed accordingly – donning  ‘bunny suits’, essential to keep the level of cleanliness around the satellite to the necessary level. All through the development, integration and tests of the Vegetation instrument and the satellite, great care has been taken to limit as much as possible any potential particle contamination on instrument optics in order to guarantee full performance.

This Friday turned out to be a busy day, ending at 22:00 with the closure of the high bay and the installation of the video sensor.

Continuing the work of the previous day, once the external panels were re-integrated, the electrical connections were established and the solar panels were lit up during the ‘floodlight’ test.

Each panel was illuminated by a strong light source and its resulting electrical signature was recorded to be compared to data recorded during a similar test executed before shipment to the launch site. For this test, the light in the integration had to be dimmed, providing a discotheque atmosphere in the cleanroom…

The day ended with the continuation of onboard software testing.

On our day off, the team visited a Vietnamese village established near to Cayenne.

The satellite having been fully finalised from a mechanical point of view, this following week has been dedicated to software testing, including simulation of the separation and the following few orbits (corresponding to the Launch and Early Operations Phase, LEOP), transition to the different satellite modes and the simulation of operation scenarios.

The end of this week corresponded to the end of activities of the satellite on a standalone basis, making way for pre-joint operations activities and the final integration on the launcher separation system.

During this week, it was announced that these joint operations activities would be delayed in view of technical issues with the multi-payload adapter of the launcher. Additional analyses were required to conclude this qualification for flight. This delay introduced in turn a delay in the final launch date.

The satellite was prepared for its final mating on the separation system. The teams of ELV, CASA and QinetiQ worked together to realise this delicate operation.

At the end of the day, the satellite was fully secured on its new integration stand above the SSIS, or Small Satellite Interface System, which includes the separation system and the interface to the upper part of the launcher, the multiple payload adapter of the Vega launcher.

The satellite was now ready for transportation early the following week, moving from one Kourou integration hall to another a few kilometres away, to prepare for its mating to the Vespa – the Vega Secondary Payload Adapter.

Sunday and Easter Monday are not working days in Kourou. The Proba-V team took this opportunity to visit the north of French Guiana close to the Suriname border. We enjoyed the amazing sight of sea turtles laying their eggs in the sand of Awala-Yalimapo beach.

Arianespace and CNES have prepared for the satellite’s transfer from the S1B integration hall to the S5C integration hall. This move is required since Proba-V’s auxiliary passenger, VNREDSat, is scheduled to be filled with hydrazine in a dedicated part of the S5 building. The final assembly of the upper part of the launcher (the PAC), will be performed in S5 prior to its transfer to the launch pad.

Today began with the mating of the Proba-V–SSIS composite onto a dedicated adapter cone, the complete assembly being mounted on an air cushion pallet.  At the end of this operation, the pallet was ‘pushed’ into a huge container that is normally used to move very large payloads such as ATV or Envisat to Ariane 5’s  final assembly building.

Towed by a truck, the container stands more that 10 m tall. The complete operation was finished round lunchtime. Moving the container from building S1 to S5 10 km away required blocking the road in front of the space centre. In order to limit the disruption of lunchtime traffic, the transfer was planned to start at 14:00.

Come 14:00, however, we had not received the green light from the CSG safety team in view of a hazardous filling operation for ATV-4 in the nearby S5C building. We received the authorisation to move only around 17:30. Proba’s container was fully air-conditioned and cleanliness-controlled, ensuring the satellite enjoyed comfortable travel conditions. When the convoy did start its delayed journey to S5, it seemed as though an entire building was on the move.

Some 45 minutes later, Proba-V arrived at its destination to be offloaded from its container. Around 20:00, Proba-V was safely consigned to its new integration hall.

Owing to the delay moving from S1C to S5C, building, the completion of the pallet offloading and the connection to the electrical support equipment took place today.

And following its transfer to S5C, the satellite itself was scheduled to undergo a full functional test.

At the end of the day, Proba-V was standing in the same position that ATV-4 had been five days earlier – consecutively the largest and smallest spacecraft built by the Agency!

Following its arrival in S5C, Proba-V’s final battery mating and closing of its last panel took place today. This marked the last time we could see inside the satellite. The full functional test was flawless.

Following the umbilical connection, the battery charging and monitoring support equipment was verified. Finally, a full simulation of the electrical separation was performed at the end of the day.

Today saw Proba-V fully configured into its final flight configuration. The team cleaned its mass memory, positioned separation relays in the flight configuration and disconnected all support equipment with the exception of the battery umbilical connector. The satellite is ready for mounting on the launcher!

Most of the QinetiQ Space team therefore left French Guiana to return in Europe, having all worked hard to achieve this important milestone, leaving with our sincere thanks.

A limited three-person team remained in Kourou to cocoon the satellite and carry on activities until the start of joint operations.

A welcome day off.

Today the results of analyses necessary to declare the qualification of Vega’s multi-payload adapter were presented. The positive outcome allowed the start of the joint operation also called here the POC – Plan d’operations combinées – on Wednesday. Everybody here was happy that the launch campaign is going ahead, with the new launch date announced as 2 May local time.

The main task of the team left in Kourou was to monitor the battery and to prepare for Proba-V’s entry into the POC, planned for Saturday 13 April.

Today marked the first day of the POC for Proba-V. Early in the morning the satellite was rolled on its integration stand from the S5C to S5A halls, in order to free the airlock now needed to store and clean the rocket fairing. In S5A, the plate carrying auxiliary passengers VNREDSat and ESTCube-1 was integrated into the lower part of Vespa. Later that day, the upper part of Vespa was mated. Proba will be hoisted on top of Vespa on Monday.

Day off. We are all preparing for the important days to come…